The New York Times
May 8, 1932
Balzac Galleries—Work by…Yun Gee, a Sino-Franco-American, whose work is imaginative and deft, if occasionally lurid. Opened May 3, closes May 28. 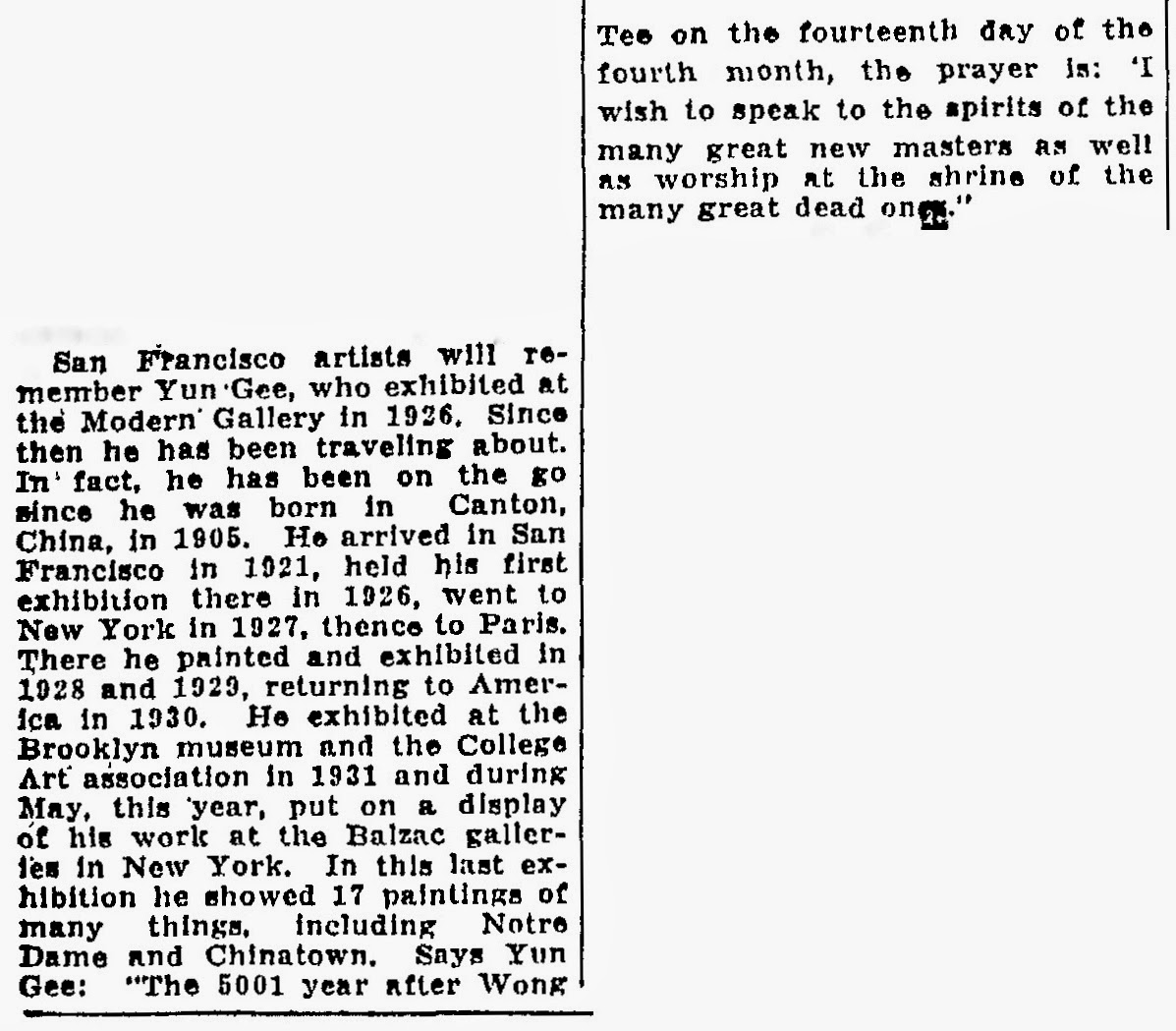 The Chinese Christian Student
April 1933
p4: Water Colors: Yun Gee Shows Twenty New Abstractions
Six years ago a tousled-haired, wild-eyed Chinese boy broke away from art  school in San Francisco and defied tradition. He painted impressionistic vogues, was acclaimed, and founded a revolutionary school of art. What happened since is San Francisco art history. He hied to Paris, executed fifty canvases, returned to New York, and recently his City Alma Mater on the Coast saw twenty of his new water-colors at the Art Center.

Studies in abstraction, they included eight sensations: four about dancing and four about travel impressions. One group fused sound and tone via composition, another air and water via rhythm movement. Two—The Octopus and Living Stone—were inspired by his wife’s poetry. One was called, “Jade Mountain.”

This new abstractionist angle of Yun Gee amazed visitors, and critics felt that he was lost in Western influence, without a trace of the East. His unity of emotional, abstract expression, leaving no identity of either East or West, was a calamity to them.

In six years Gee has developed from a subject impressionist to an intellectual abstractionist, tarrying long enough in the intervening stages of cubism, surrealism, etc. During the transition, he painted some admirable canvasses that synthesized Chinese art feelings and themes on Western forms. His “Confucius” and “Yang Kwei-fei” brought him high critical claims. His present intellectualism completes the cycle of growth. Inevitably, he will revert to his “Confucius” style, in which medium he is now executing “The Last Supper” for St. Peter’s Lutheran Church in New York.

The New York Times
June 25, 1933
...A painting of “The Last Supper” by Yun Gee, the Chinese-American artist, was publicly shown last week at St. Peter’s Lutheran Church in the Bronx, for which it was painted as an altar-piece. A preliminary sketch of the painting was exhibited by the artist in the recent Salons of America, at the American-Anderson Galleries.