The New York Times
June 7, 1942
Paintings by Yun Gee are on view at the Milch Gallery, an exhibition arranged for the benefit of Democracy-in-Action, affiliated with the British and American Ambulance Corps. The organization will devote its proceeds from the admission charge and sales to ambulances and equipment for the United Nations. Portraits, fantasies, urban glimpses of Paris, Madrid and New York and a variety of other themes are treated by the artist in a style that at times suggests Soutine. 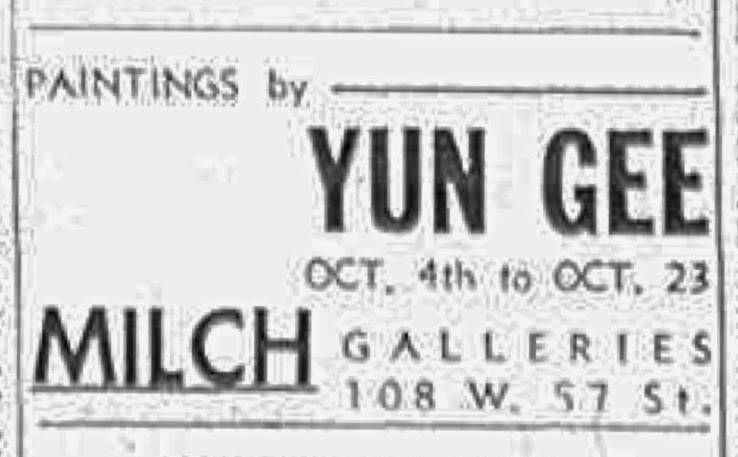 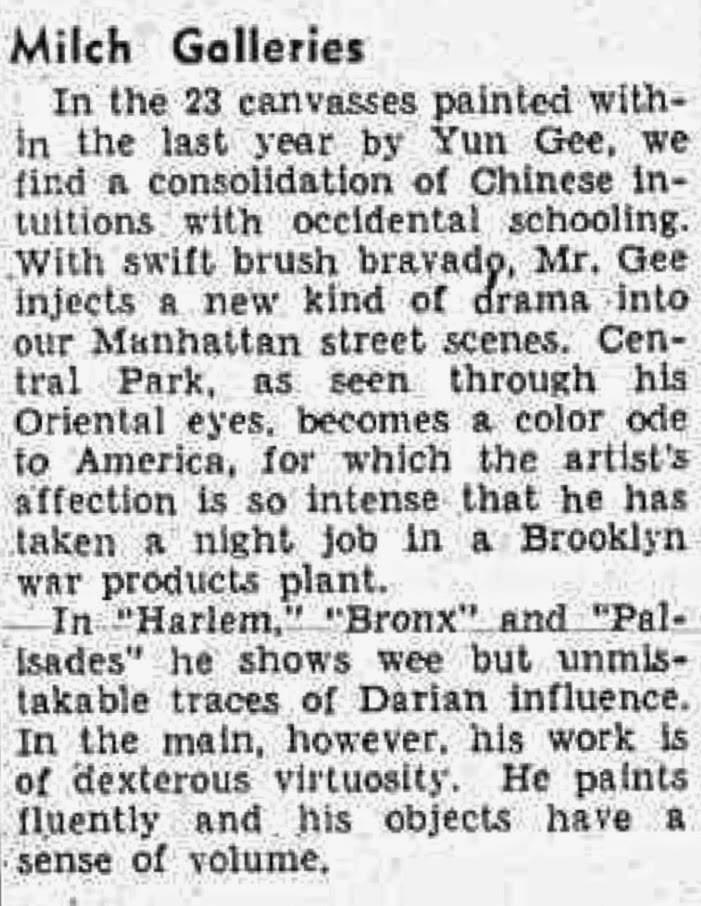 In the 23 canvasses painted within the last year by Yun Gee, we find a consolidation of Chinese intuitions with occidental schooling. With swift brush bravado, Mr. Gee injects a new kind of drama into our Manhattan street scenes. Central Park, as seen through his Oriental eyes, becomes a color ode to America, for which the artist’s affection is so intense that he has taken a night job in a Brooklyn war products plant.

In “Harlem,” “Bronx” and “Palisades“ he shows wee but unmistakable traces of Darian influence. In the main, however, his work is of dexterous virtuosity. He paints fluently and his objects have a sense of volume.

Art Digest
October? 1943
The American Scene Through Chinese Eyes
Yun Gee, the Chinese-American artist who paints New York not quite like you'd expect a Chinese to paint, is holding an exhibition during October at the Milch Galleries (4th to 23rd) of recent paintings. Yun Gee has shown a great many pictures in the last few years; first at an art goods shoppe on 34th St., then at the Montross Galleries, at Milch for benefit of the American Ambulance Corp., etc. It was his painting of the connoisseur Vollard peering through a loop of forefinger and thumb, that most took the fancy of critics. Fairly fantastic assemblages of figures and horses rather stopped them.

Now, the 1943 exhibition shows a comparatively domesticated Yun Gee. While still brilliant and unbridled in color, his paintings have jelled more nearly in the conventionally American mode of making a picture. Views of New York are familiar rows and corners, albeit Yun Gee imbues the scent with animation and high good spirits. What a glitter he sees in a Morning in the Bronx! How gala the Union Square scene which he calls Holiday on Old Broadway, showing he knows his New York history. Central Park West amuses him for the minarets and towers that form that fancy sky line.

One painting in the show is a tip-off to his present occupation. Discretion prevents our saying what essential industry has hired his talents but his Army Searchlight painting, done at night, was a special permission concession granted by his employers for whom he works on a day shift.—M. R.

Art Digest
November? 1943
John B. Powell: Yun Gee
Yun Gee’s Gesture
John B. Powell, newspaper correspondent in the Far East, and former editor of a Shanghai English-language newspaper, China Weekly Review, has, in effect, gone back to school. A portrait of him painted last year in this country by the Chinese-American artist, Yun Gee, while the released prisoner Powell lay in Medical Center with small chance to recover from Japanese-inflicted tortures he suffered as prisoner, has been given to his alma mater.

A representative of the faculty of the School of Journalism, University of Missouri, will come on to New York from Columbia, Mo., to accept the gift from the now foot-less journalist, who received it as a gift from the artist Yun Gee. An exhibition of paintings by Yun Gee was held at Milch Galleries last month. 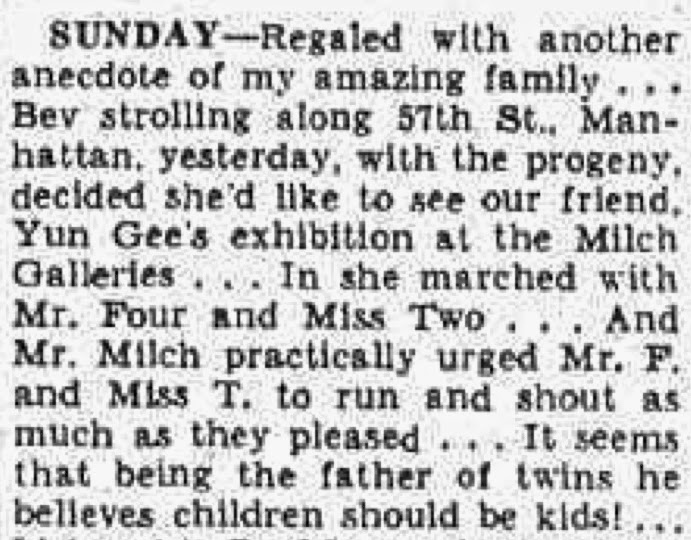 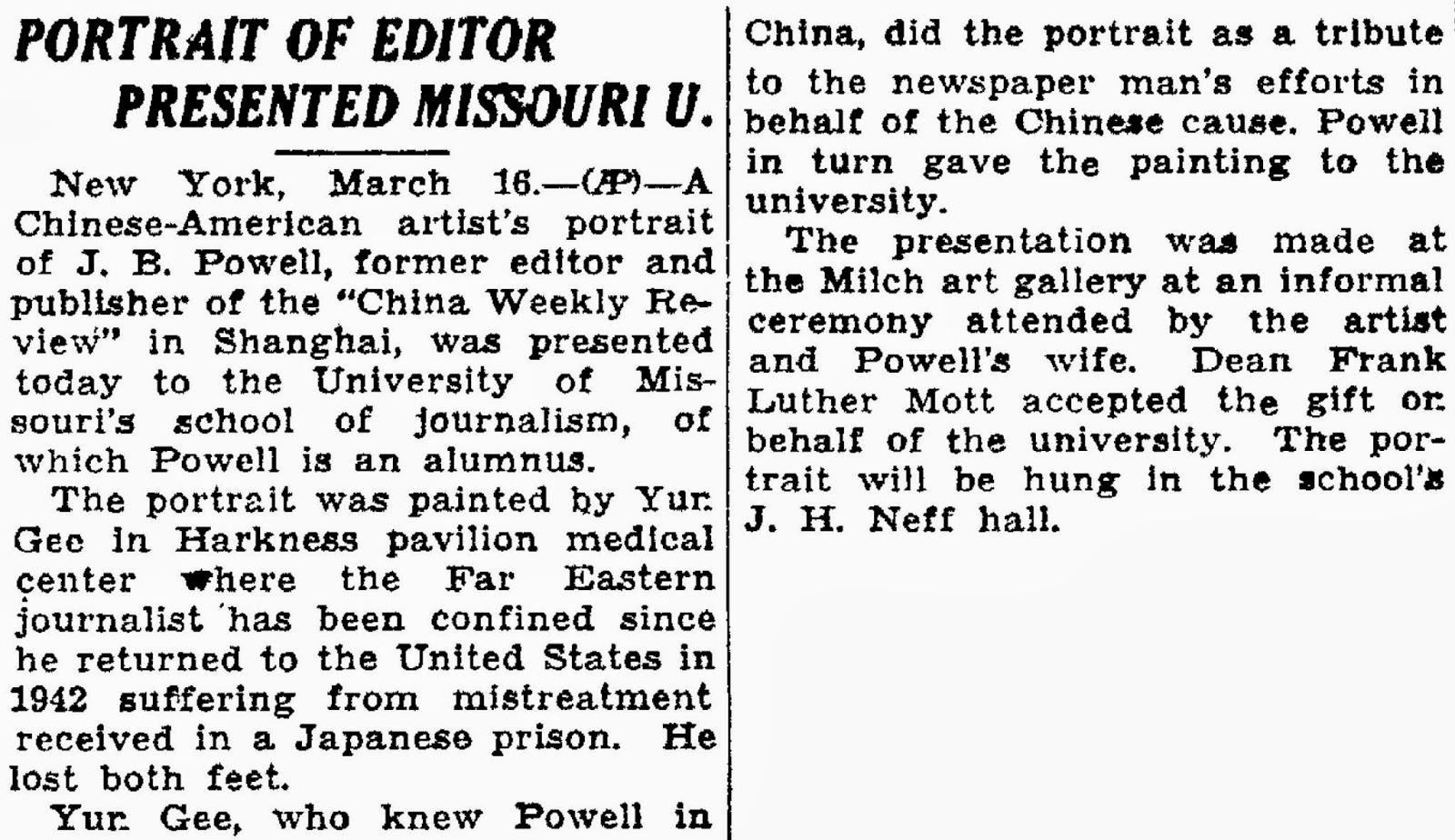 Portrait of Editor Presented Missouri U.
New York, March 16.—(AP)—A Chinese-American artist’s portrait of J.B. Powell, former editor and publisher of the “China Weekly Review” in Shanghai, was presented today to the University of Missouri’s school of journalism, of which Powell is an alumnus.

The portrait was painted by Yun Gee in Harkness pavilion medical center where the Far Eastern journalist has been confined since he returned to the United States in 1942 suffering from mistreatment received in a Japanese prison. He lost both feet.

Yun Gee, who knew Powell in China, did the portrait as a tribute to the newspaper man’s efforts in behalf of the Chinese cause. Powell in turn gave the painting to the university.

The presentation was made at the Milch art gallery at an informal ceremony attend by the artist and Powell’s wife. Dean Frank Luther Mott accepted the gift on behalf of the university. The portrait will be hung in the school’s J.H. Neff hall. 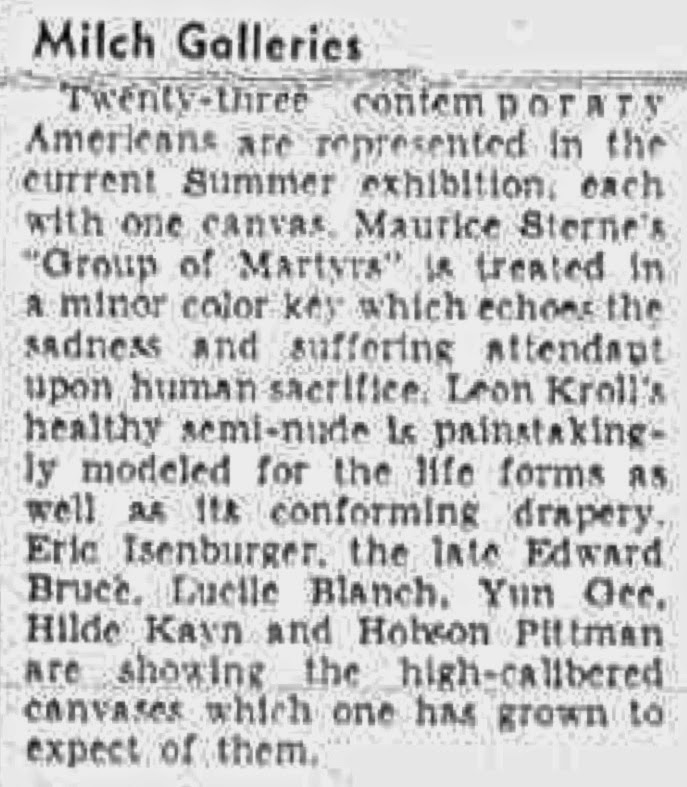 Twenty-three contemporary Americans are represented in the current Summer exhibition, each with one canvas….Yun Gee…are showing the high-calibered canvases which one has grown to expect of them.

(Tomorrow: Yun Gee at Lilienfeld Gallery and Flatbush Art Galleries)
Posted by Alex Jay at 8:00 AM