Yun Gee in The Argus: A Journal of Art

April 15, 1927
page 4: Yun, who must have a bouillant temperament under a quiet appearance, is sometimes extravagant in his ideas. His attempt at plasters in his Head is amusing, but does not do any good to his reputation. His Drawing and his Portrait of a Man make up for it and prove that he can be a serious artist and has a fine talent.

July 1927
page 2: Dorr Bothwell’s Exhibition
The Modern Art Gallery brought its first season to an auspicious close with a fine exhibition, the paintings and drawings of Dorr Bothwell. Miss Bothwell’s work impressed me as being definitely sincere, unhampered by stylistic emulation of any renowned contemporary….

…The picture of the young Chinese artist, Yun, is another extremely successful piece of work, due to its value as a portrait as well as to compositional solidity….

page 5: The “Portrait of Yun,” by Otis Oldfield, is an excellent canvas, from the standpoint of color, proportion, depth and perspective, but it does not show the genuine young Chinese painter as most people know him. It represents him as a mature and stern man, which is a respectable viewpoint but an altogether different conception to that which most people who know Yun have of this artist. 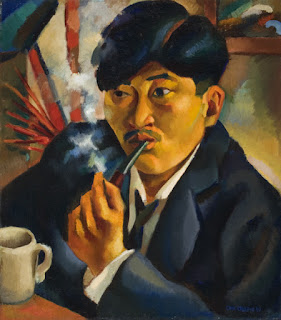 page 8: Yun, Chinese artist of San Francisco, will leave for Paris on July 9 for an indefinite period of study and work.

October 1927
page 11: We read in the “Brooklyn Daily Eagle” of August 22nd: “Out of war-torn China has come a young futurist who senses the soul of the world.” This comment refers to Yun Gee, Chinese artist of San Francisco, who is now in Paris preparing for his first exhibit there.

After reviewing some of the work of Yun, the art critic of the “Daily Eagle” concludes with the observation that “Yun’s work provokes thought. His immaturity and faulty technique yield before the idea.”

November 1927
page 8: Modern Gallery Elections
At the annual election of officers last month, Julius Pommer was re-elected president and Marian Trace secretary of the Modern Gallery, a group of young San Francisco artists. The organization has grown so prosperous that it was found necessary to create a new office, that of treasurer. Jacques Schnier was elected to fill this responsible position.

December 1927
page 10: Yun, the Chinese painter who started his artistic career in San Francisco, held a one man show in Paris during the month of November, at the Galerie Carmine. Besides this exhibit, three of his pictures have been accepted by the Princess Lucien Murat and are hung at her gallery, “Fermé la Nuit.”

June 1928
page 6: A young modern who may disappoint the prophesies which were made for his future is Yun Gee, if his Paris acquaintances turn out to be mere snobs trying to encourage him in the direction of the eccentric and in a style which, so long as it is a transitory experiment, is interesting, but which will lose its value if it becomes a set mode of expression. This does not particularly refer to the two paintings by Yun exhibited last month at the East West, as they were done last year. It is rather a far distant warning from those who follow his work in the French capital where he resides at present.

(Next post on Monday: Mei Lan-fang in This Week in Chicago)
Posted by Alex Jay at 8:00 AM