Every exhibit is of the impressionistic or futuristic school and all from the brushes of young Chinese students in the quarter. None of the students is more than twenty years of age and one is only fifteen.

The exhibition is conducted by Yun, aged twenty, an Americanized native Chinese who wears a basque cap on his head and fuzz on his chin. 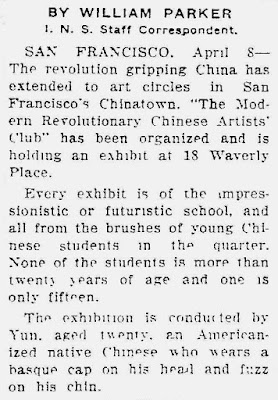 San Francisco Chronicle
(California)
May 15, 1927
page D7, column 5: Yun, the Modern Revolutionary Chinese Artists Club founder, has taken his pupils’ exhibit to the Telegraph Hill Tavern. It is hard to tell what artistic province these young Chinese will break out in next. Bohemia being a land of no boundaries. 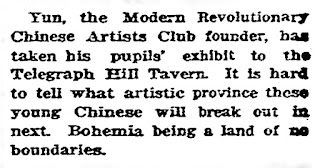 (Next post on Friday: James Wong Howe in The New Movie Magazine)
Posted by Alex Jay at 8:00 AM