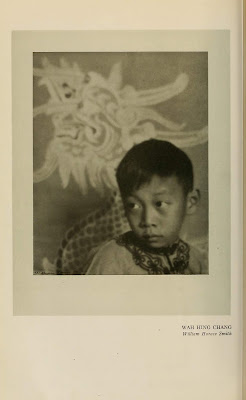 
(Next post on Friday: The Chinese in Camera Craft)

“The mission of the Chinese American WWII Veterans Recognition Project is to recognize, honor and celebrate the military service of Chinese Americans who fought in the Second World War through advocacy, education and preservation.”

If you know a Chinese American WWII veteran, living or deceased, please click the Preservation tab, at the website, and fill out the registration after reading the registration instructions.


(Next post on Friday: Wah Ming Chang in Camera Craft)


Fong Get was born in March 1859 in Ning Yan, China. The birth information was found in the 1880 and 1900 U.S. Federal Censuses. Also, the California Death Index, at Ancestry.com, said Fong was born about 1859.

The 1900 census said Fong immigrated in 1877. The 1880 census (below) recorded him in San Francisco, California at 1016 Stockton Street and his occupation was photographer.

Around 1887 Fong married Liang Shee whose name was recorded on the Social Security application of their first son, “Kim Poon Fong”, who was born April 13, 1891. The first born child was daughter Choy Ying “Rose” Fong, around 1890, and the second son, Quong Kim Fong, was born December 2, 1893. Kim was the generation name of Poon and Quong whose names, Chinese style, were Fong Kim Poon and Fong Kim Quong.

In 1897 Fong and son, Poon, performed in the play, “The First Born”. Fong’s role was mentioned in the San Francisco Chronicle, April 25, 1908, in an article by Louis J. Stellman who wrote


…One of the interesting characters of Chinatown is Fong Get, an aged photographer, who knows everybody in Chinatown and was in the original cast of the celebrated play, “The First Born.” He was one of the first to return to San Francisco and establish himself in business. To every white visitor he relates with manifest pride the story of how his boy took the first prize at something or another in the grammar school.

“The First Born” originated in San Francisco and went on tour. The San Francisco Call, August 15, 1897, said “‘The First Born’ Company is now touring the Northwest in all cities it has visited playing to the largest audiences of the summer season. The papers along the coast have devoted columns to the story of the play.”

In New York City “The First Born” debuted on Broadway October 5, 1897. The following day a review appeared in The New York Times. 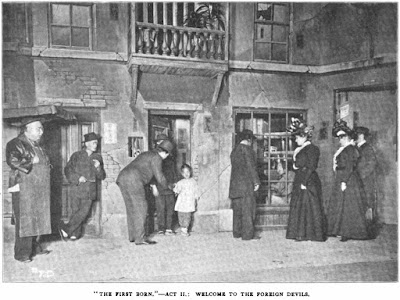 
Manager Fred Belasco of the Alcazar Theater is in receipt of a telegram from his brother, David Belasco, the dramatist, giving the information that “The First Born,” Powers’ fascinating little Chinese drama, will be presented at the Duke of York Theater, London, on November 2. The original Alcazar Company will also interpret the characters in the metropolis of Great Britain, leaving New York City on the Umbria to-morrow.

Poon’s 1921 passport application said he was in London for a month in 1903. I believe he was referring to his participation in “The First Born”.


Fong Get, father of the little Chinese boy who plays in “The First Born,” and who himself plays the role of the keeper of vegetable stall, writes from New York to John Y. Gray, bailiff of the United States Circuit Court, to the effect that he and “the kid” will return to San Francisco next Saturday. Both are in good health and are delighted with the histrionic profession.

In the 1900 census, Fong, his wife and three children resided in San Francisco at 6 Prospect Place. Fong’s occupation was janitor. Also in the household was Dung Sam who was a photographer-developer. Next door at 8 Prospect Place was photographer Wong Tin.

It’s not known what Fong did immediately after the 1906 San Francisco earthquake which destroyed Chinatown. By 1907 sections of Chinatown were rebuilt. The San Francisco Call, August 31, 1907, reported the following real estate transaction, “Benjamin A. Mardis to Fong Tse King, Fong Wing and Fong Get, three story and basement brick building at Stockton and Sacramento streets; 120 months, $30,000.” Fong’s photography studio was on Stockton Street and he may be the person mentioned in the purchase.

In Anna Pegler-Gordon’s book, In Sight of America: Photography and the Development of U.S. Immigration Policy (2009), she wrote


In looking for a photographer who worked closely with the Chinese community to help subvert Chinese exclusion and some of the common assumptions about photography, we need look no further than Fong Get. Fong maintained a gallery at 914 Stockton Street in San Francisco from before 1910 to about 1920, taking photographs of both elite Chinese and ordinary immigrants…. 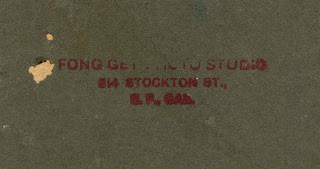 The Los Angeles Herald, June 17, 1908, reported the revival of “The First Born”. Fong’s return to his role was noted in the Baltimore American (Maryland), December 21, 1908, “Fong Get, who played the vegetable vendor in ‘The First Born,’ at San Francisco last week, created the role when the play was first produced, 11 years ago. Since then Fong Get has become a professional photographer.”

Fong has not yet been found in the 1910 census.

Poon was a freshman at the University of Colorado. He was listed in the 1911 Coloradan yearbook. 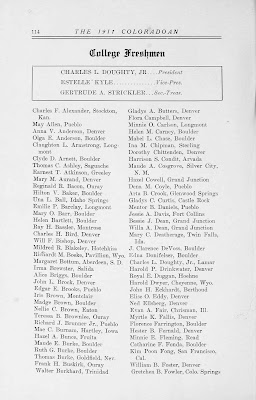 Poon attended the University of California at Berkeley where he received his Bachelor of Science degree. He was pictured in the 1913 The Blue and Gold yearbook and graduated in 1914. 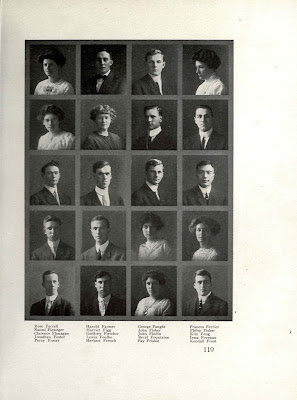 Poon was profiled in The Oregonian (Portland, Oregon) October 3, 1914.

Fong was mentioned in the Italian newspaper, L’Italia, June 11, 1915. Google translation below.


Celebrate his anniversary by committing suicide
Fong Get, a Chinese, saw yesterday the body of his humble Leong Art thoughtfully from a rope attached to the ceiling of his room in Stockton St.

Next to the corpse it found a note written by the suicide and so conceived:

“The most we can live is 100 years. One hundred mini is a good age for a rich man or an emperor. But for a poor devil, 50 years are more than enough. Today I am 50 years old and so I bid farewell to life.”

Here is a true philosopher!

Poon was issued a passport on February 5, 1917. His occupation was civil engineer and he intended to visit Japan and then to China for “railway construction work”. The passport application included the address of his father, 16 Waverly Place, San Francisco. 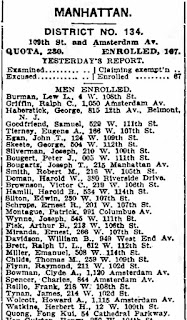 Fong was mentioned in the 66th Congress, 1st Session, May 19–November 19, 1919, House Documents, Volume 33, which published a letter about fraud at the Immigration Service at San Francisco.


Fong Get, leading Chinese photographer, who made hundreds of fake photographs for use in falsifying records.

The 1920 census was enumerated in January. Fong was recorded at 914 Stockton Street. The photographer was able to speak English.

Poon returned to San Francisco through Seattle, Washington where he arrived April 29, 1920.

According to Poon’s second passport application, he planned to leave March 19, 1921 for Japan, China and Hong Kong. His address was 16 Waverly Place, San Francisco. The identity witness was merchant, Fong Fat, who had the same address. 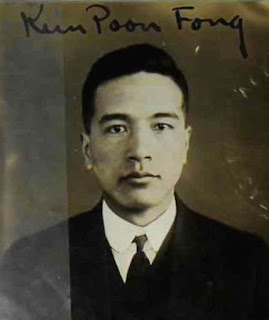 Quong was profiled in the photography publication, The Focus, June 1927. Quong was known as “Fong Get, Jr.” 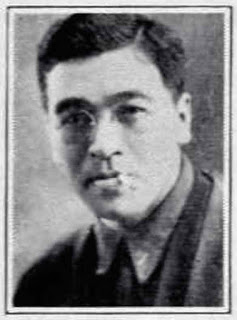 Some one has said something about a son being but the echo of his father. If this is true, we may expect Fong Get Jr. to become as prominent and unique a person as was his dad. Who hasn’t heard of Fong Get (Sr.), the Bushnell of Chinatown?

Possibly aspiring for a part opposite Anna May Wong, he entered the movies, first with Paramount, then Fox and others. In October, 1917, Uncle Sam invited him to help make the world safe for democracy and he was assigned to the 108th New York Infantry. On arrival in France he was transferred to the intelligence service and remained till October, 1919. [Quong’s World War I draft card, at Ancestry.com, recorded his address as 54 Cathedral Parkway, New York, New York.]

In 1920 he studied to be a chiropractor and graduated from the Palmer School. At the time of the death of his father, about two years ago, he was practicing in New York.

He tells us his mother needs him in San Francisco more than his patients need him, and while his mother lives he will continue to conduct the famous studio at 960 Grant Avenue. His brother, a graduate of the University of California and an authority on railroads, has a responsible position in China. What price glory.

Fong passed away February 28, 1926, in San Francisco, according to the California Death Index.

On February 26, 1938, Poon arrived in Seattle from Shanghai, China.

In the 1940 census, Quong, using the name “Get Fong”, and his mother lived at 960 Grant Avenue in San Francisco. Quong was a self-employed photographer.

On April 26, 1942, Quong filled out and signed his World War II draft card with the name Quong Kim Fong. A day earlier, his brother, under the name Kim Poon Fong, signed his draft card. Both resided at 960 Grant Avenue with their mother. 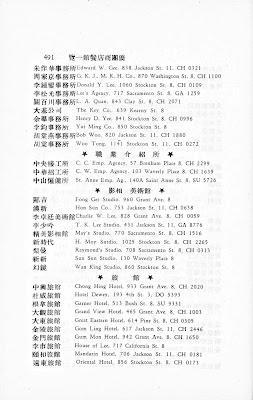 Handbook of Chinese in America (1946)

(Next post on Friday: Chinese American WWII Veterans Recognition Project)
Posted by Alex Jay at 8:00 AM No comments: