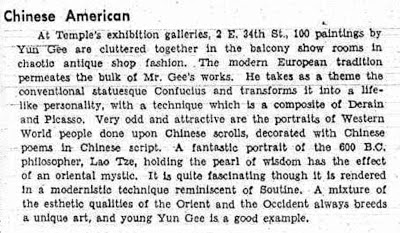 At Temple’s exhibition galleries, 2 E. 34th St., 100 paintings by Yun Gee are cluttered together in the balcony show rooms in chaotic antique shop fashion. The modern European tradition permeates the bulk of Mr. Gee’s works. He takes as a theme the conventional statuesque Confucius and transform it into a lifelike personality, with a technique which is a composite of Derain and Picasso. Very odd and attractive are the portraits of Western World people done upon Chinese scrolls, decorated with Chinese poems in Chinese script. A fantastic portrait of the 600 B.C. philosopher, Lao Tze, holding the pearl of wisdom has the effect of an oriental mystic. It is quite fascinating though it is rendered in a modernistic technique reminiscent of Soutine. A mixture of the esthetic qualities of the Orient and the Occident always breeds a unique art, and young Yun Gee is a good example.

The New York Times
May 5, 1940
The exotic note of the week was struck by the show of paintings by Yun Gee, at the Temple Gallery, 2 East Thirty-fourth Street. If the artist himself were to come to the gallery unaware of the exhibitor--could such a metaphysical potentiality be arranged—he might well wonder at the variety offered: scroll paintings, Chinese sages, Paris and French village street scenes, figure pieces, and somewhat allegorical or symbolical paintings. A rather florid esthetic chameleonism pervades much of this work, which is, however, not without interest.

A portrait of General Maxine Weygand, painted in Paris by Yun Gee, Chinese artist, in 1938, has been given by the artist to the American-French War Relief, 744 Fifth Avenue, where it is on exhibition and sale. The painting was shown early this month at the Arthur U. Newton Gallery.

A mural entitled “The Spirit of Chinese Resistance,” by Yun Gee, has been placed on exhibition at the Young China Club, 18 Mulberry Street.

The New York Times
December 13, 1940
Proceeds from the sale of paintings by Yun Gee, Chinese artist, now exhibiting at the Montross Gallery, will be donated to Madame Chiang Kai-shek's war orphans. The artist is donating the proceeds through the Chinese Women's Relief Association, which is sponsoring the exhibition. 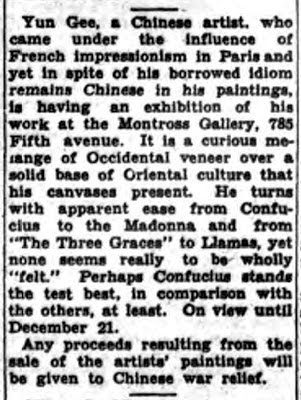 Yun Gee Improves
At the Montross Gallery, young Mr. Yun Gee’s 26 oils show up ever so much better than his works last year at a 34th St. antique shop. His interests vary from an idealistic portrait of Lao Tze (master of Confucius) to “Lake at Versailles,” “Botanical Gardens in the Bronx” and “Central Park Views.” These, together with other landscapes, street scenes and symbolic canvases, bear the stamp of modernistic European training mixed with enough of Mr. Gee’s natural Chinese design tendencies to make for heterogeneous picturizations. 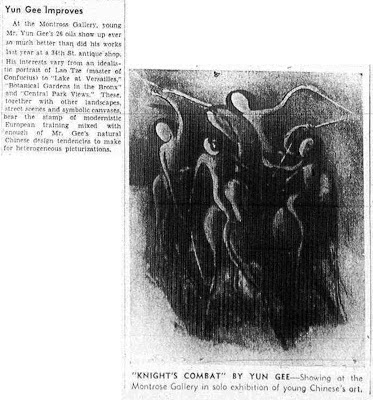 The New York Times
December 15, 1940
Chinese Art on View
Exhibit Will Be for Benefit of Chinese War Orphans
A special showing of paintings by Yun Gee, modern Chinese artisit, will be opened tomorrow at an exhibit sponsored by the Chinese Women’s Relief Association of New York for the benefit of its fund for Chinese war orphans. Mrs. Lin Yutang, wife of the author and president of the association, heads the list of hostesses for the exhibition, which will be held at the Montross Gallery, 785 Fifth Avenue.

There is not such an amazing variety of styles and subjects in the current exhibition of paintings by Yun Gee at the Montross as was true of his somewhat retrospective exhibition last year. There are, to be sure, portraits of Confucius and Lao Tze and Ambrose Vollard (the late connoisseur circling one eye with his fingers to appraise the better what he is looking at); and there are landscapes that range from Versailles to a lake in Central park. This last presents that touch of fantasy one has learned to expect from this ultra-versatile oriental painter, the touch in this case being an animal (unicorn or donkey) frightening and apparently frightened by birds. There is a painting, too, of llamas whose formal presentation should appeal to our best Picassoids. Flowers, a Madonna and a pigmentarily explosive view of San Francisco’s Chinatown are other themes which have found expression. Till Dec. 21.

(Tomorrow: Yun Gee in China Monthly)
Posted by Alex Jay at 8:00 AM