Most of the newspaper readers of the United States are familiar with the work of Paul Fung, who is said to be the only Chinese cartoonist working on an American newspaper. But few—very few—people know that he is married and has a little daughter who was born in June of this year.
Fung is twenty-two years old. He is the son of the Reverend Fung Chack, Baptist minister and a graduate of Leland Stanford University. Paul was born in the United States. When he was five years old, his father took him to China, where he attended school for six years. His father hoped to make a minister of him, a sort of Chinese Billy Sunday. But Paul had already become interested in another line of endeavor. As he strolled about the streets of Canton, the boy sketched with pad and pencil the quaint characters and scenes of the Orient, and showed so much skill in his drawings that his father, finally despairing of making a minister of him, brought him back to America.
Fung went thru the grade schools of Seattle and the Lincoln high school. While he was still in high school his clever sketches came to the notice of the managers of a string of vaudeville houses on the Pacific Coast. He was signed up for a chalk talk behind the footlights, and made one tour of the vaudeville circuit, then turned down a longer contract to go back to school.
When Fung finished high school, he tucked a folio of his sketches under his arm and tackled a newspaper office. He sat for two hours on a hard bench in front of the managing editor’s sanctum before he was noticed and invited in for an interview. Given an opening, Fung, who had his recitation all framed up in advance and rehearsed many times, delivered it. He was given a chance to show his talent and made good. He still works for that newspaper.
Fung has developed into a clever caricaturist. One of his best drawings he believes to be the war poster, “The Sweetheart of the Allies,” which showed a Salvation Army lassie serving doughnuts to the men in the trenches. This picture was copied all over the world
Fung has many friends and thousands of admirers. He has a real sense of humor and possesses the American point of view.
“What do you like to draw best of all?” he was asked.
Fung's gaze unconsciously went to a picture of his wife and baby which rests in a frame on the back of his desk.
“Nowdays,” he replied with a smile, “I like best to draw a paycheck.” 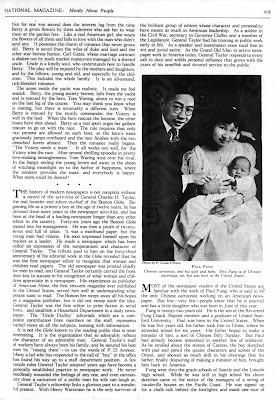 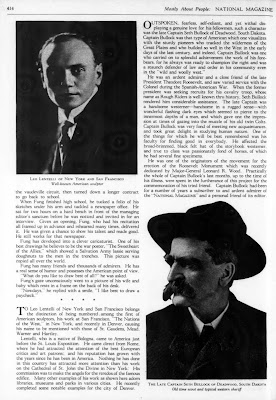