Timothy Locke Fung was a commercial artist. His older brother was Paul, a cartoonist and the subject of several posts here. His younger brother was Silas, also a commercial artist, a Century of Progress collector and the subject of the documentary, Randoms Acts of Legacy, which showed extended clips of Silas’s home movies. The film included images of Paul and mentioned Timothy.

Timothy was born on November 20, 1898 in Portland, Oregon according to census records, some travel documents and the Oregon Historical Records Index. In the 1900 U.S. Federal Census, Timothy was the youngest of five children born to Fung Chak and “Lee Chak Fung”. The census enumerator thought the family name was Chak. The children, in descending age, were Lai, Eunice, Annie and Paul. The family resided in Portland, Oregon at 169 Ankeny. Fung Chak was a minister. Also living with the family were Fung Chak’s mother and nephew.

The Baptist Home Mission Monthly, October 1901, published a letter by Timothy’s father, Fung Chak, who was preparing to leave for Canton, China. He included a photograph of his sons. 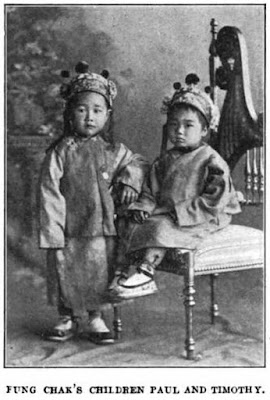 Timothy’s 1905 passport application was filed March 13 at the Consulate General in Canton, China. Timothy left the United States September 1, 1901. The purpose of the passport was for travel in Kwangtung Province. Timothy also stated that he intended to return to the U.S. within four years. Timothy signed with an X. His father signed as a witness on Paul and Timothy’s applications. The passport stated erroneously that Timothy was born in Seattle, Washington. 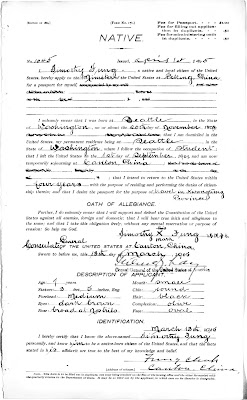 Another passport was issued to Paul and Timothy on January 18, 1908. 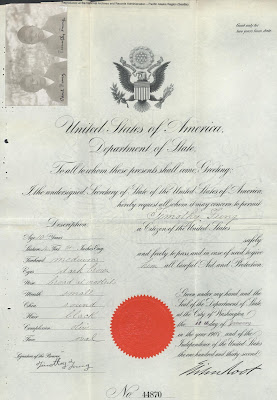 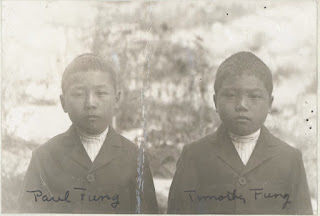 On August 16, 1908, Fung Chak, Paul and Timothy were aboard the steamship Aki Maru which departed the port of Hong Kong. Their designation was the Chinese Mission, on South Clark Street, in Chicago, Illinois. The ship arrived in Seattle on September 16. Below is Timothy’s interview from his Chinese Exclusion Act case file at the Seattle National Archives branch. 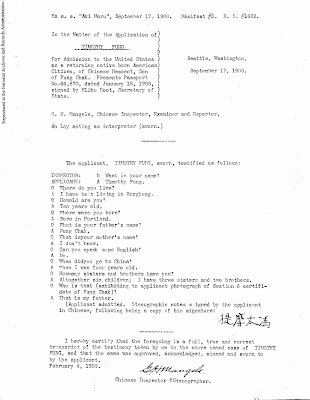 In the 1910 census, Fung Chak, Timothy and Paul were in the household of Herbert Low who was married to Eunice. Fung Chak’s son-in-law was a merchant. They resided in Portland, Oregon at 43 North Third Street.

Timothy and Paul performed at a benefit concert for famine sufferers in China as reported in The Oregonian, March 12, 1911.

An article about the Tuesday Afternoon Club’s annual lecture appeared in The Oregonian, April 25, 1915, and mentioned was Timothy who played the cornet. 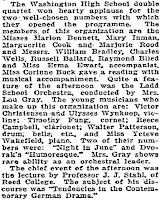 On September 12, 1918, Timothy signed his World War I draft card. He was a student at Lincoln High School in Portland and had the same address, 228 Morrison Street, as his sister, Eunice. Timothy was described as medium height and build with brown eyes and black hair.

Timothy has not yet been found in the 1920 census but he was in Portland. The Christian China, February 1920, reported an event in Portland.

The local branch of the Chinese Students’ Christian Association has been organized for active work for the new year. The officers recently elected are: Mr. Kenneth Lum, chairman; Miss Mary L. Sun, secretary; Mr. Harold Lowe, treasurer; Mr. Timothy L. Fung, sergeant at arms. The last Friday of each month has been chosen for our regular meeting. We are all looking forward to a very active year; discussion groups have been organized. Not only religious, but educational, economic and social questions of the present day will be taken up….

Timothy prepared for another visit to China. Below are the interviews of Timothy and witnesses from his Chinese Exclusion Act case file at the Seattle National Archives branch. 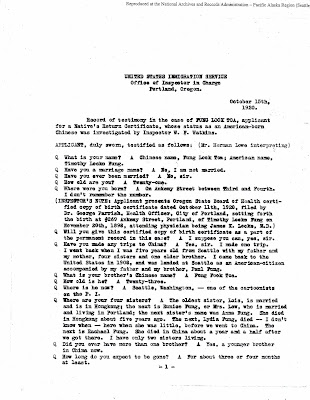 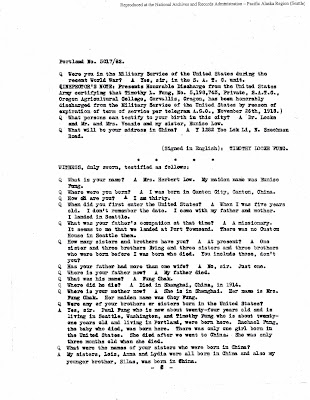 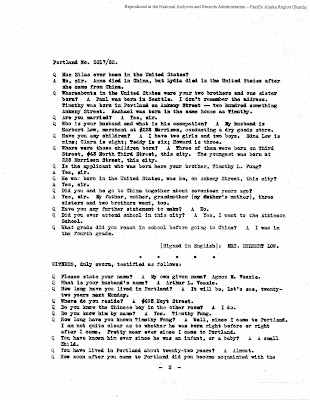 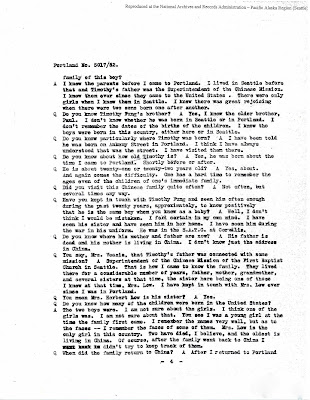 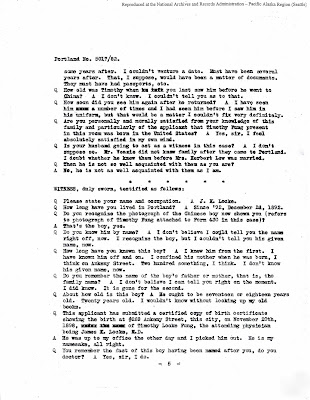 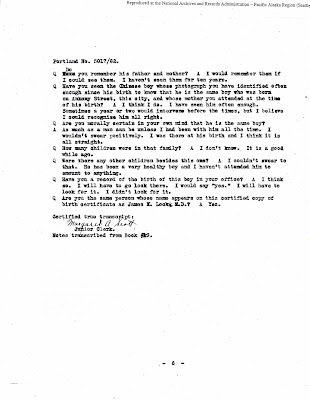 Timothy’s Form 430 was approved October 20, 1920 in Portland and the following day in Seattle. His passport, issued on November 2, said he was going abroad to visit his mother in China and travel to Japan and Hong Kong. 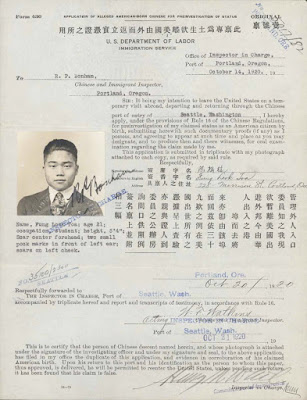 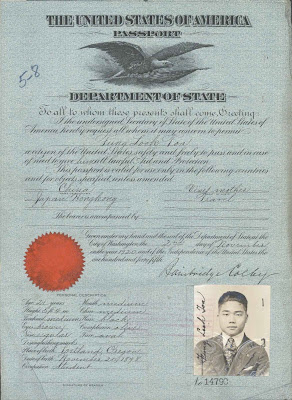 A passenger list at Ancestry.com recorded Timothy’s return to Seattle, by way of Vancouver, on June 23, 1922. It was a family affair which included his father and sister plus his uncle Herbert Low, his wife and four children. They sailed on the Empress of Canada from Hong Kong  on June 7.

At some point, Timothy made his way to Chicago. The Chinese Students’ Monthly, May 1925, mentioned Timothy’s brother, Silas, who was studying at the Meyer Both College of Commercial Art of Chicago. It’s likely Timothy studied there, too. 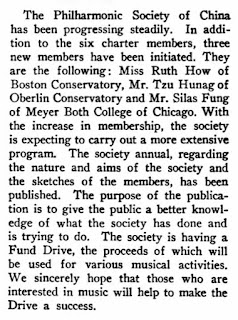 Timothy was mentioned in the November 1925 issue of The Chinese Students’ Monthly, “In the music contest, September 5, the first prize for the vocal contest was captured by Mr. Timothy Fung of Chicago…”

The number of young people attending the church services increased with the opening of the new building. This resulted in the organization of the Chinese Youth People’s Club early in 1928. Members of the club were mostly college students with a few highschoolers and young adults of various professional backgrounds. The purposes of the organization were to draw more young people to the Church for Christian fellowship and to lead the non-Christians to Christ. The program, which was presented every Sunday evening in the Church’s reception room downstairs, was of a devotional, educational and musical nature along with occasional social functions which proved to be quite successful. Among the enthusiastic organizers and leaders of the club were Mun-kwong Wong (the first president), Paak-shing Wu, Tso-tin Taam, Dr. Shou-yee Chan (a professor at the University of Chicago), Silas Fung, Timothy Fung, Bok-chang Yang, Helen and Ann Moy, Pauline and Martha Leong, Edward M. Kan, Margaret and Esther Kan, Clara Low, Otto and Lillian Law, Sunny Lau, William Poy Jue, Ruth, Philip and Paul Moy and Mrs. Flora Belle Wong. The average attendance was about thirty.

Musical activities were also increased at the Church. A sizeable [sic] choir, reorganized under the directorship of Timothy Fung, met every Friday evening to rehearse for Sunday service. A 7-piece orchestra was led by Silas Fung. It rehearsed bi-weekly at the Fungs’ home. The orchestra appeared in several special events of the Church and received favorable comments. These musical groups added much to the church services as well as attracted more young people to the house of God. …

In the late 1920s, Timothy moved away while Silas remained in Chicago.

According to the 1930 census, Timothy, an advertising commercial artist, was in the household of his brother, Paul the newspaper cartoonist. They were Manhattan, New York City residents at 300 Riverside Drive.

In the 1940 census, Timothy’s sister, Eunice, had remarried to Harry Lewis. Timothy was a member of the household which included Eunice’s three sons and a nephew. They lived in Manhattan at 611 West 158 Street. Timothy’s occupation was commercial artist at a wholesale engraving company.

During World War II Timothy enlisted in the Army on August 13, 1942. The record said the commercial artist was single and a Nassau County, New York resident who had two years of college. The Department of Veterans Affairs’ Beneficiary Identification Records Locater Subsystem Death File, at Ancestry.com, said Timothy was discharged November 9, 1944.

The late Bruce Edward Hall mentioned Paul and Timothy in his book, Tea That Burns: A Family Memoir of Chinatown.

Aunt Thelma and Uncle Tim drive in from Long Island. Uncle Tim always tries to surreptitiously slip me a lucky red envelope at Chinese New Year's, but I never catch on and he has to just shove it in my pocket. His claim to fame as a commercial artist is that he helped design the Wonder Bread wrapper, while his brother, Paul Fung, was once a famous cartoonist, drawing the Dumb Dora strip, popular in the 1930s and 1940s until high living caught up with him and he died young.

Timothy passed away July 1979 in New York according to the Social Security Death Index.

(Next post on Friday: Yun Gee in California History)
Posted by Alex Jay at 8:00 AM