Who Created the “How to Use Chopsticks” Illustrations?

Who made the “How to Use Chopsticks” illustrations on the disposable chopsticks wrapper is a mystery. The date of its introduction on the wrapper is unknown. Also, it’s not clear when mass production of disposal chopsticks began for use in the United States.
Some wrappers have a date. In 1986 McDonald’s introduced Chicken McNuggets Shanghai. The chopsticks were produced in Japan and South Korea.

In the 1970s, British Airways had disposable chopsticks on some their flights. The third step added animation to show the chopstick’s movements.

This boxed set of drawings was published in the Sunday Magazine of the Cleveland Plain Dealer (Ohio), May 16, 1971. 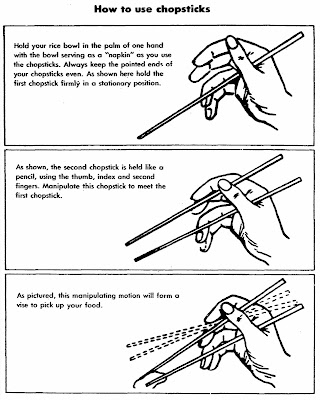 A newspaper syndicate produced these drawings that appeared in the Augusta Chronicle (Georgia), August 31, 1972; Arkansas Democrat (Arkansas), October 5, 1972; and Houston Chronicle (Texas), February 1, 1973, among others.

The Chicago Daily News (Illinois), July 18, 1975, shared this version with their readers.

Another version appeared in the August 5, 1979 edition of the Richmond Times-Dispatch (Virginia). 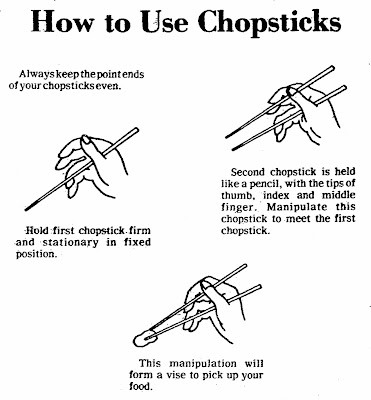 Wrappers from the 1960s with instructions have not been found. Two illustrated Chinese cookbooks from the 1960s featured three-steps on how to use chopsticks. The Joyce Chen Cook Book (1962) chapter, Using Chopsticks the Proper Way, showed four illustrations and three steps. The illustrator was not credited. The three-step drawings by Grambs Miller (aka Grambs Aronson), were made for Grace Zia Chu’s The Pleasures of Chinese Cooking (1967). The illustrations were reprinted in the Dining Guide of the Times-Union (Albany, New York), June 8, 1969.
Evidently the earliest appearance of the three-step drawings was in St. Nicholas, April 1890. “How to Use a Pair of Chopsticks” was written by Eliza Ruhamah Scidmore. (The engravings were reprinted in her 1891 book, Jinrikisha Days in Japan.) An unknown model held the chopsticks for the artist to draw. It’s not clear who made the engravings and where they originated (Was it in Japan or the U.S.?). The simple three-step drawings from 1890 and today are virtually identical. 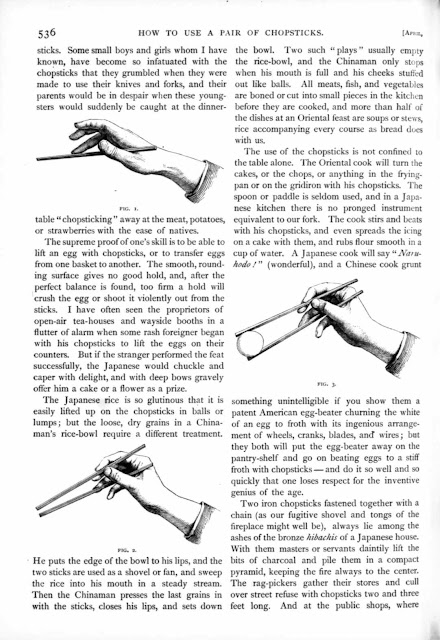 Scidmore’s article was reprinted in several newspapers including the Globe-Republican (Dodge City, Kansas), June 18, 1890. Later in 1890, a four-step method of using chopsticks was published in a number of newspapers including the Salt Lake Herald (Salt Lake City, Utah), September 21, 1890, Helena Independent (Montana), September 21, 1890 and Roanoke Times (Virginia), October 4, 1890.
Images of chopsticks had appeared much earlier. The rice-bowl and chopsticks engraving (below) was published in China: A General Description of That Empire and Its Inhabitants (1836) and later appeared in Ballou’s Dollar Monthly Magazine, October 1857 and Frank Leslie's Popular Monthly, December 1877. 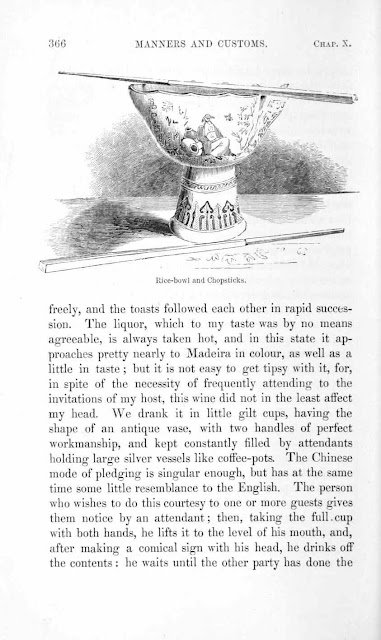 The Nature of Man (1870) had a page displaying chopsticks with other utensils and this explanation:

… Much misunderstanding prevails as to the use of the chopsticks, many persons supposing that they are held one in each hand, after the manner of knives and forks in Europe. These curious implements are both held in the right hand after the following manner. One of them is taken much as a pen is held, except that, instead of being held by the thumb and forefinger, it passes between the tips of the second and third fingers. This chopstick is always kept stationary. The second chopstick is held lightly between the thumb and forefinger, and can be worked so as to press with its tip against the point of the other, and act after the manner of pincers. … 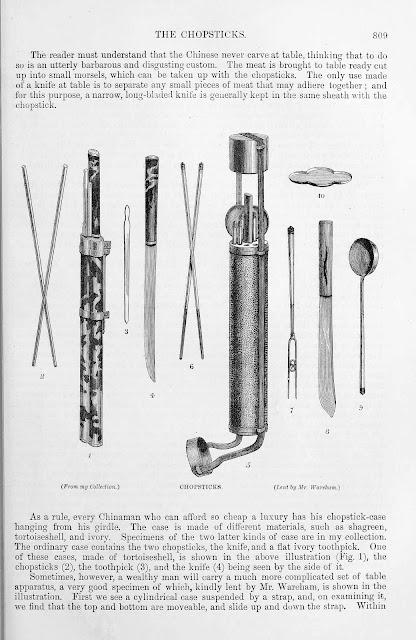 … I took up my chopsticks, two bits of black wood about as big round as a lead pencil and twice as long, and proceeded to struggle with them. A quiet Chinaman seated at the next table with a bowl of rice in front of him perceived my difficulty and politely showed me how to use them. It is not difficult when one gets the hang of them. You must hold one rigidly, letting the upper end project over the hollow of the hand, as the average school boy holds his pen, and griping it firmly between the second joint of the thumb and the ball of the fourth finger. The other is held lightly as a good penman holds his pen, between the first and second finger and the ball of the thumb. ... 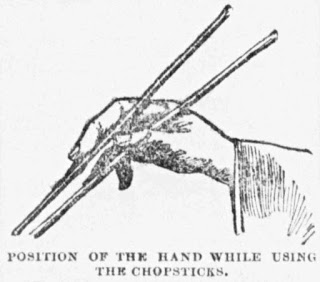 The Evening Star (Washington, DC), May 4, 1889, published an account of a visit to Japan. It included an illustration of a hand with chopsticks holding a piece of food (step three position) and mentioned disposable chopsticks.

... The diner takes up with his chopsticks a slice of fish and radish and dips them in the sauce before carrying them to his mouth. Toward the end of his meal he will remove the saucer-shaped top from his rice bowl and pass it to the attendant, who will place on it usually four slices of some kind of preserved or pickled vegetable. This he will eat as a relish with his rice. The odor is strong and objectionable to foreigners, but one soon acquires a taste for it, and it becomes an indispensable table article with rice. The chopsticks are usually of wood and about ten inches long. Incased in a little paper sheath, they are placed on the table or tray with the dinner. The cheaper and commoner chopsticks given to a guest at a hotel are supposed to be used only at one meal. They are merely cedar ticks. Some of the chopsticks, however, are lacquered, and when the guest has finished eating with such a pair he wipes them on a napkin. Chopsticks like those, when used, are left in the guest’s room, to be used by him whenever he has a meal served. The chopsticks are grasped both between the thumb and index finger. The middle finger is thrust between them to form a fulcrum, and then the chopsticks are used like a tiny pair of tongs, with which morsels of food are picked up. ... 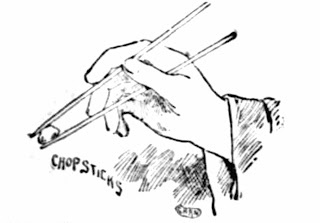 According to Chopsticks! An Owner’s Manual (1991), disposable chopsticks were invented by Tadao Shimamoto in 1878. Scidmore’s article included an engraving of them. 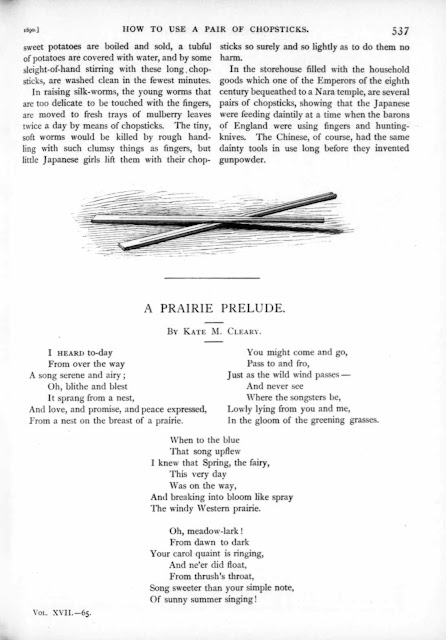 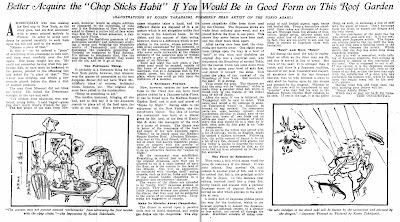 Thanks to the Japanese, we have disposable chopsticks and fortune cookies. (Read Jennifer 8. Lee’s 2008 book, The Fortune Cookie Chronicles.)
MISCELLANEOUS
Here are some rare depictions of chopsticks in the left hand. 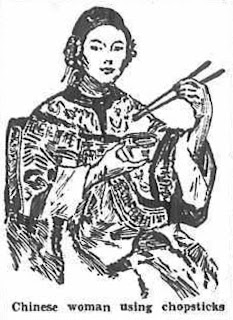 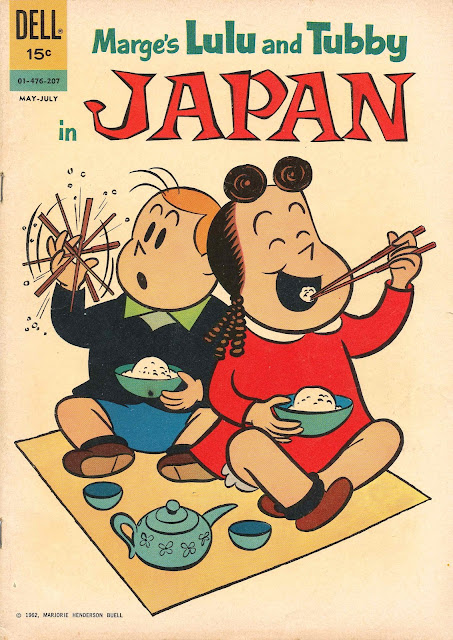 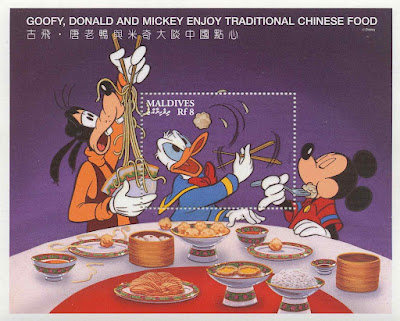 Maldives, 1996
On television, an early appearance of Chinese takeout and chopsticks appeared in the controversial series, All in the Family, which showed son-in-law Mike Stivic bringing Chinese takeout for dinner. Loose chopsticks were taken out of the bag. Within five minutes, you’ll hear chink, chinkish, chinks, chinky and gooks. The episode, “Flashback: Mike Meets Archie”, was broadcast on October 16, 1971. In Barney Miller, Sergeant Nick Yemana (Jack Soo) searches his desk for chopsticks to eat his takeout meal. That episode, “Ms. Cop”, originally aired on March 13, 1975.
And in case you missed it, National Chinese Take-Out Day was November 5.
(Next post on Wednesday: Seong Moy in Print Magazine)
Posted by Alex Jay at 8:00 AM