Grace McDonald, who is making a short tour after completing “Gung-Ho,” has starred in several musical comedies on Broadway, doing a song and dance act which took her to pictures.

Featured with Ina Rae will be the Kim Loo Sisters who proved a sensation with Miss Hutton at the Astor Hotel in New York City, also Stuart Foster and Roger Eleck.

The screen feature for the three days will be “Million Dollar Kid,“ starring the “Dead End Kids.” 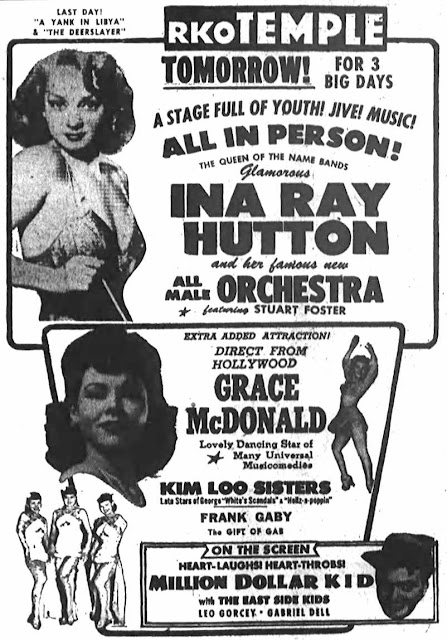 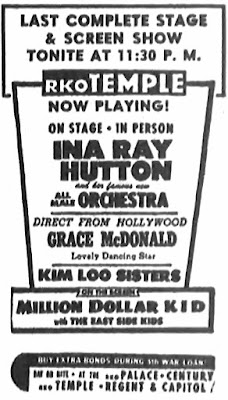 On the screen is the comedy, “So’s Your Uncle,” with Billie Burke, Donald Woods, Eyise Knox and the Rhythm boys.

The talented Chinese misses obviously please when they sing such tunes as “Victory Polka” and “Take It Easy.” Smooth warblers, if ever there were any, are these easy-to-look-at girls. Recently with Ina Ray Hutton and Hellzapoppin’, they are tops….

Miami Herald
(Florida)
March 5, 1944
Olympia vaudeville, Wednesday, will be headlined by Jane Pickens, singing star of radio and stage, and one of the famous Pickens sisters. Other acts are: The Amazing Mr. Ballantine, comical magician; the Three Kim Loo Sisters, Chinese singers; Jed Dooley and Audrey Evans, comedy team, and the Margaret Faber dancers. The screen attraction will be “The Miracle of Morgan Creek.”

Miami Herald
(Florida)
March 9, 1944
On with the Show
Olympia Theater Vaudeville Hits New High
The feast is on again at the Olympia, which this week comes up with a five act bill that is outstanding from start to finish.

…Nor will you run across many more appealing stage personalities than the three Kim Loo Sisters, a trio of Chinese harmony singers, whose voices form a perfect blend with their makeup and Oriental beauty…. 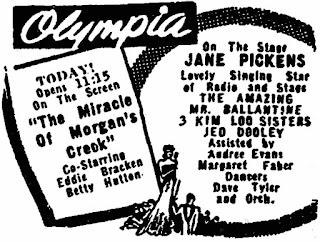 …The Kim Loo sisters, who sing with her band, were a distinct hit at the Olympia last week. These girls are American-born Chinese, and sisters. Their first names are Alice, Margaret and Patricia. They dress pretty much alike, fix their hair alike; but they are not triplets.

Billboard
March 18, 1944
Olympia, Miami
(Reviewed Wednesday Afternoon, March 8)
One of the best shows of the winter, The acts run smoothly, even without an ember for a change. 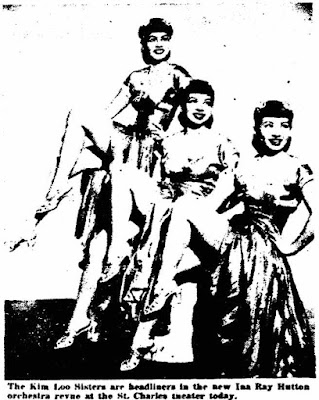 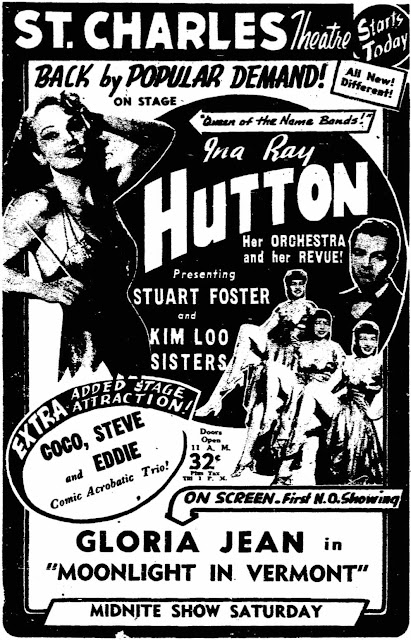 Times-Picayune
(New Orleans, Louisiana)
April 15, 1944
Screen in Review
Ina Ray Hutton, queen of the name bands, and her all-male orchestra with a top-notch revue opened Friday at the St. Charles theater. She was back in New orleans by popular demand, and it is easy to see why because the show is the best yet at the St. Charles. 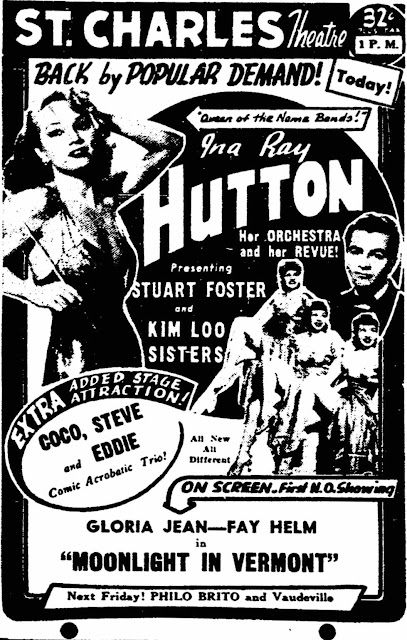 …Kim Loo sisters, singing against a blast of brass, offer Victory Polka and Take It Easy. Harmony is good. Mairzy Doats is the encore, but it would have been more show manly to have had something later in the Alley’s catalog….

Billboard
May 20, 1944
L.A. Orph Hits 21G
Los Angeles, May 13.—Picking up good business over the week-end, On a Ray Hutton and orchestra, headlong a show at the Orpheum here, grossed a neat $21,000. On the bill with Miss Hutton and her crew were the Kim Loo Sisters, who shared marquee billing; Christine Forsyth, Arnie Hartman and Ollie O’Toole. Pic, Detective Kitty O’Day. House seats 2,200 and charges 75 cents tops. 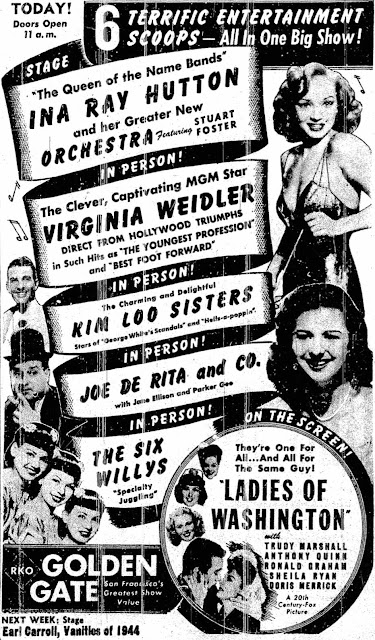 San Francisco Chronicle
(California)
June 1, 1944
Willys Win Gate Plaudits with Juggling Precision
The Willys had it at the Golden Gate stage show yesterday, had speed, precision and flash. For the Willys are a juggling family, the fourth generation of the craft, and the grace and intricacy of the family calling is evident in their performance….

Billboard
June 3, 1944
Coast Songsters Busy with Pix
…Joan Whitney, Alex Kramer, and Mack David have turned out a successor to it’s Love, Love, Love, which was purchased by Columbia for Stars on Parade. New tune is called Come To Me My Honey and will be warbled by Bob Crosby in Meet Miss Bobby Socks. Other numbers from the film are Two Heavens, I’m Not Afraid, Come Rain, Come Shine, A Fellow on a Furlough and Idolizing. Kim Loo Sisters will warble Take It Easy in the same film…. 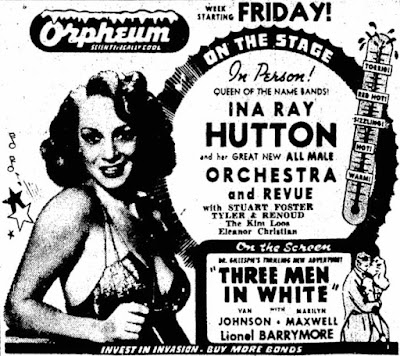 World-Herald
(Omaha, Nebraska)
July 1, 1944
Reviews
Subdued Hutton Leads Loud Band
More visually attractive than ever in a sort of a new subdued technique, Ina Ray Hutton is leading a male band at the Orpheum—but a loud one….

…The show includes Tyler, Rinaud and Arden, comics, the three Kim Loo sisters, Jim Penman, the chattering juggler, and Stuart Foster, who does the vocals…. 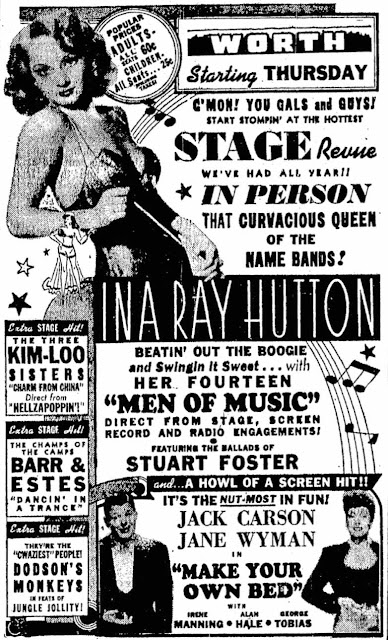 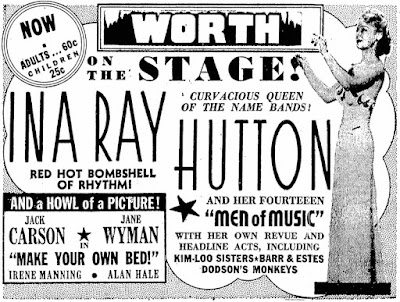 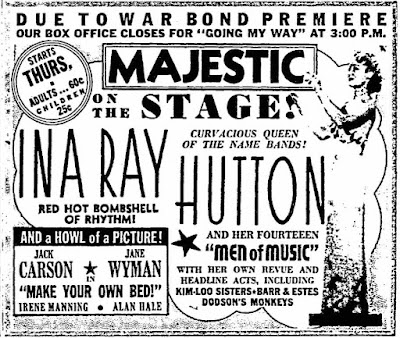 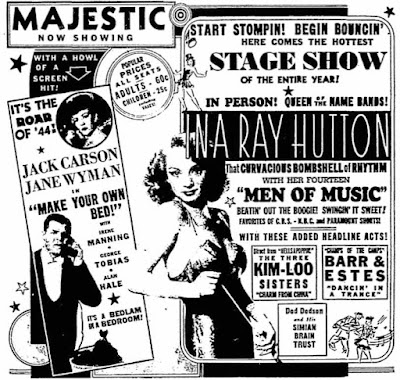 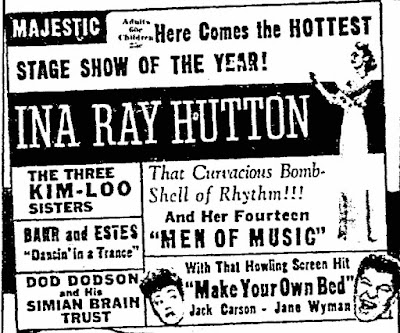 There’ll be a single show at the Coliseum at 7 o,m, sponsored by Lorin Kiely, followed by a dance at 9:45 p.m. in Colonial Gardens.

There are 20 people in the show, including Stuart Foster, a popular singer here, and the Kim Loo Sisters, three attractive Chinese girls who were active here last year on behalf of the USO.

Motion Picture Herald
September? October? 1944
Meet Miss Bobby Socks
Columbia—Voice Worship
Our vast numbers of bobby socks contemporaries who worship at the shrine of a “Voice” will find a candid reflection of themselves in this Columbia musical comedy.

…The picture virtually throbs with songs, among them “I’m Not Afraid of Love,” and “Come With Me, My Honey,” rendered by Crosby. There are also numbers by a Chinese trio, the Kim Loo Sisters, and Louis Jordan and his Tympany Five. Glenn Tryon directed, with stress on jive, and Ted Richmond produced.

Seen at the Fox theatre in Brooklyn, where a weekday matinee audience greeted it with chuckles. Reviewer’s Rating: Fair. — Mandel Herbstman….

Columbus Dispatch
(Ohio)
October 20, 1944
Accent on Youth in New Pictures at the Broad
The accent is most definitely on youth in both of the features which opened at the Broad Thursday and while patron may be confused in their future thinking as to who was who in which the sum total will have left an altogether pleasing taste in their visual and auditory memories….

…The temptation was to add Bob Crosby and the Kim Loo sisters onto that list but they didn’t appear until the companion feature “Meet Miss Bobby Socks” got underway….

Evansville Press
(Indiana)
October 26, 1944
Aces, Comedy, Singing Trio, Get Big Hand in Grand Stage Show
The Grand’s current stage show, which opened yesterday for a week, builds toward a rousing finish that leaves the audience with a taste for more….

Rockland County Journal-News
(Nyack, New York)
August 19, 1963
Local Jazz Drummer Beats Way to Dance Bands of Big Time
Buddy Christian profile
…Christian moved on in the jazz band world to play with Teddy Powell for a year and then he went with Ina Ray Hutton. Lenny Goldstein was also with this same orchestra for a while.

It was while with Ina Ray and in Evansville. Illinois, that Buddy married Norma Rubin, who had come all the way from Brooklyn for the wedding. The Kim Loo Sisters, a song trio with the band, stood up with them at the wedding and then, as soon as the “I do’s” were pronounced, Buddy and the Kim Loo Sisters had to take off to make the evening show.

Brooklyn Eagle
(New York)
November 11, 1944
Columbia’s “Meet Miss Bobby Socks” is the co-feature at the Fox, starring Bob Crosby, as a crooner who returns from the wars and looks up the girls who has been writing him and promising him a job in a radio station, and Louise Erickson, young newcomer. Crosby’s pen pal turns out to be a Miss Bobby Socks, aged 16, and how she goes about trying to get him a job, and the hilarious results form the basis of the film story.

“Meet Miss Bobby Socks” is jumpin’ with jive. There are seven songs, five of them warbled by Crosby, including “I’m Not Afraid of Love,” “A Fellow on a Furlough” and “Come With Me, My Honey.” A couple go to the Kim Loo Sisters, Chinese singers; and to Louis Jordan
and his Tympany Five.

The doings in this picture will find, favor with bobby sox contemporaries, because the music in “Meet Miss Bobby Socks” is hot and sweet. If it doesn’t send YOU, it’s not the fault of the players in this film, who try very hard. 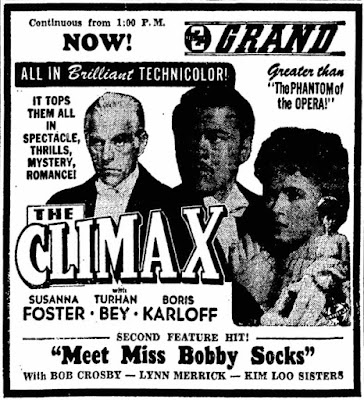 World-Herald
(Omaha, Nebraska)
December 16, 1944
Holiday Inn Is Worthy Repeat
Second feature at the Orpheum is a first-run musical called “Meet Miss Bobby Socks,” and in it Bob Crosby the singing maestro does his level best vocally and is aided by the Kim Loo Sisters, Louis Jordan and his tympani five…

Buffalo Courier-Express
(New York)
December 24, 1944
The New Movie Offerings
Meet Miss Bobby Socks, a musical comedy, reflects those gals who kneel at the shrine of a “voice.” In this instance, it’s Bob Crosby’s, with Louise Erickson typifying the worshippers. Bob, as a war veteran back in civilian life, is looking for a radio spot. Louise, as a smitten fan, launches a publicity drive, with the help of friends. So the crooner gets a contract.

However, there’s a hitch, due to misunderstanding, and that makes for a little drama. Of course everything eventually is smoothed. Crosby sings, as do the Kim Loo Sisters, and Louis Jordan's Tympany Five play. 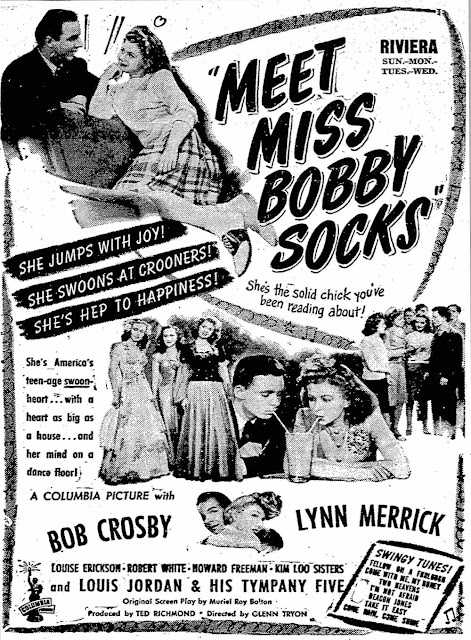 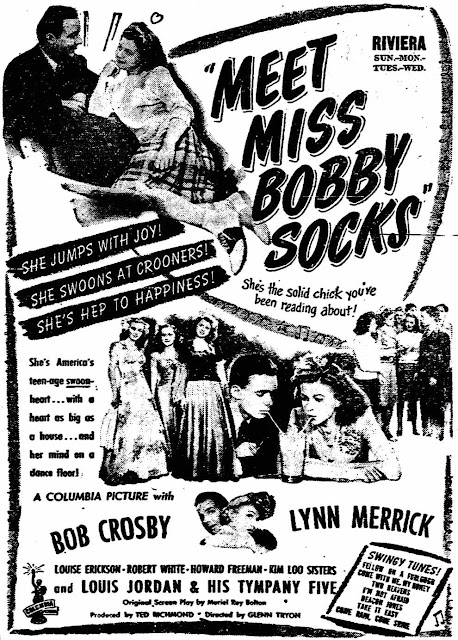