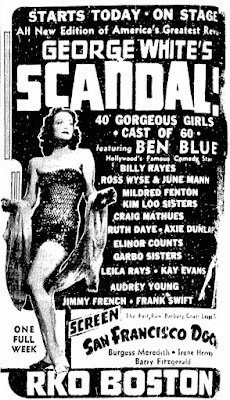 Boston Herald
(Massachusetts)
January 3, 1941
George White’s Scandals
The indefatigable George White is at it again with a new edition of his celebrated Scandals on the stage at the RKO-Boston Theater. Mr. White, of course, does not corporeally aooear, but his is the guiding genius. Specifically the show is headed by Ben Blue, the lackadaisical comedian, whose most amusing sketch is a parody of a Russian dance.

Billy Rayes, a clever juggler and all-around comedian, has a special act which is probably the best thing in the show. Both he and Mr. Blue are also in and out of the other numbers and assist them considerably with their presence. The Kim Loo Sisters are the mistresses of ceremonies, with Mildred Fenton leading the chorus in the dance numbers. We doubt if the Maxiconga [sic] is quite as new as it was when Mr. White introduced it two years ago; nevertheless here it is again as the central number of the show. Other acts include “Having Any Fun?” “Yokel Boy,” “DuBarry” and “Models.” 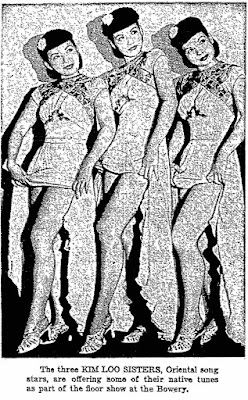 Movie stars in bunches—like bananas—that’s a novel way of announcing the new stage show which is slated to open at the Palace for a limited week’s engagement beginning Friday, Oct. 24. Six of film land’s noted noted lovelies will grace the Palace stage during this gala in person production which will be called the “Hollywood Sweater Girls’ Revue.”

Heading the movie star sparkling extravaganza, aptly called “The Season’s Stage Surprise,” will be such top acts as…the Kim Loo sisters, “Harmony Singers,” and many others….

Columbus Dispatch
(Ohio)
October 24, 1941
In Palace Stage Show
Are sweaters too revealing? Was the decision fair? Should the Lana turners, the Ann Sheridans and the Hedy Lamarrs of Hollywood be forbidden to display their forms in tight-fitting sweaters? These questions, and many like them, have been tossed from tongue to tongue by the theatergoing public, and discussion pro and con from coast to coast by leading columnists and newspaper critics ever since the recent ‘taboo” was put on sweaters by Motion Picture Censor Will Hays.

All these questions are answered in “The Hollywood Sweater Girl,” the all-Hollywood stage show featuring a host of the film capital’s most curvaceous girls and well-known celebrities, which opens at the Palace Friday for a week’s engagement.

In “Hollywood Sweater Girl,” June Preisser, popular blonde dancing personality, appears in several specialty numbers exhibiting her acrobatic dancing at its best, as she heads the large cast. Every member of the show is a well-known starlet of Hollywood “name,” including Cecilia Parker, under contract to M-G-M, who plays Mickey Rooney’s “sister” in the Hardy series Miss Healy and Peter Lind Hayes, both under contract to R-K-O; Barbara Pepper, who just finished “White Savage” for Universal; Dick Baldwin, Stuart and Taylor and the three Kim Loo Sisters, harmony singers.

In addition to this eye-filling stage production, “Badlands of Dakota,” starring Robert Stack and Ann Rutherford, is seen on the screen.

Columbus Dispatch
(Ohio)
October 25, 1941
‘Sweater Girls’ at Palace
Hollywood Starlets Make Hit in New Show
…The Kim Loo sisters, Chinese, as good a girl trio as you would want to hear, open the performance with a swing version of “Daddy” and follow it up with “I Don’t Want to Set the World on Fire,” and for an encore, “You Ain’t Nowhere.”

Boston Herald
(Massachusetts)
November 15, 1941
‘Sweater Girls’
Lending no more support to its come-on title than you might have expected, the “Hollywood Sweater Girls” show which opened yesterday at the RKO Boston for a week’s engagement turned out to be a routine sort of glamour parade which, excepting one questionable burlesque turn, was a mild and intermittently entertaining revue.

…An added feature is provided by the Kim Loo sisters, whose trios are not the least attractive items on the program…. 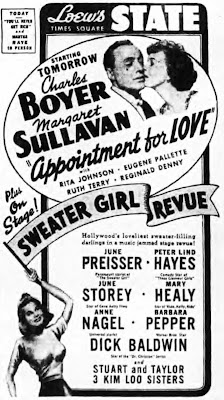 News of the Stage Shows
Sweater Girl Revue at Loew’s State
That eye-filling set of lovelies named and made famous by the Hollywood columnist Sid Skolsky, the “Sweater Girls,” are featured in the current show at Loew’s State.

…Something tastier, which reaches this department’s heart without argument, is the singing of the Kim Loo Sisters, three daintily pretty Chinese misses who have lots of the right kind of style and use it in such items as “I Don’t Want to Set the World on Fire.”

New York Post
December 17, 1941
News of the Stage Shows
At the Roxy
The Roxy is the third and last first-run theatre to offer a new stage show this week. The bill has more than the usual allotment of star attractions, with the Adrian Rollini Trio, the Berry Brothers, Paul Remos and his Toy Boys, and Paul Gerrits.

The “Sweater Girl” revue now in progress at the Brooklyn Strand has, in addition to the various feminine charms of such attractively proportioned Misses as Mary Healy, Anne Nagel and Barbara Pepper, one of the most entertaining of the younger emcees, Peter Lind Hayes.

Before the young ladies, pictorially supported by the pretty and vocally talented Kim Loo Sisters, wind up the show with the long awaited tableau, Mr. Hayes offers dramatic bits with the assistance of the Misses Nagel and Healy, also cracks wise and does impersonations….

Miss Pepper, Mary Healy and Ann Nagla [sic] head the company of the Hollywood Sweater Girls’ Revue, which, with Tommy Reynolds and his orchestra, will contribute entertainment both N«w Years Eve and New Year’s Day.

Featured with the Reynolds Orchestra is the pretty vocalist, Mary Ann McCall. Peter Lind Hayes, who just finished making the picture “Playmates” with Kay Kyser, will be master of ceremonies. Specialty acts are Stuart & Taylor, comedians; the Three Kim Loo Sisters, Chinese singers, and the Condos Brothers, dancing trio, who have been seen in movies, including “In the Navy,” “Moon Over Miami” and “Wake Up and Live.”

The screen attraction will be Bela Lugosi in “Spooks Run Wild” with the Dead End Kids, Bobby Jordan, Leo Gorcey and Huntz Hall.

Times-Union
(Albany, New York)
December 28, 1941
Hollywood Starlets Featured at New Year’s Eve Show
The Palace will end the old year and welcome 1942 in a blaze of glory on the stage. On Wednesday the famous Hollywood Sweater Girl Revue, headed by some of the best-known starlets from the land of the cinema, will open a two days engagement at the Palace.

The revue has been augmented by Tommy Reynolds and his orchestra which features Mary Ann McCall. There will be four big shows on New Year’s eve, with a gala midnight performance….

…Peter Lind Hayes, who plays an important role in Kay Kyser’s new picture, “Playmates with the M. C.” will introduce the Sweater Girls, Stuart and Taylor, comedians; the 3 Kim Loo Sisters, Chinese glamour girls, radio and record singing stars and the Condos Brothers, the dancing team who were featured in “In the Navy,” “Moon Over Miami,” “Wake Up and Live” and many others…. 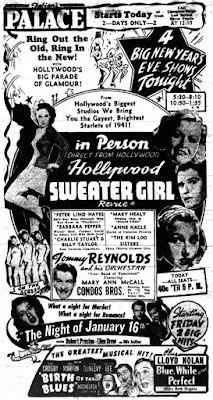 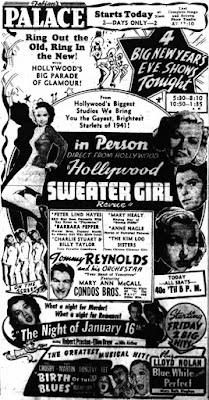 (Next post on Friday: The Deadly Hands of Kung Fu)
Posted by Alex Jay at 8:00 AM