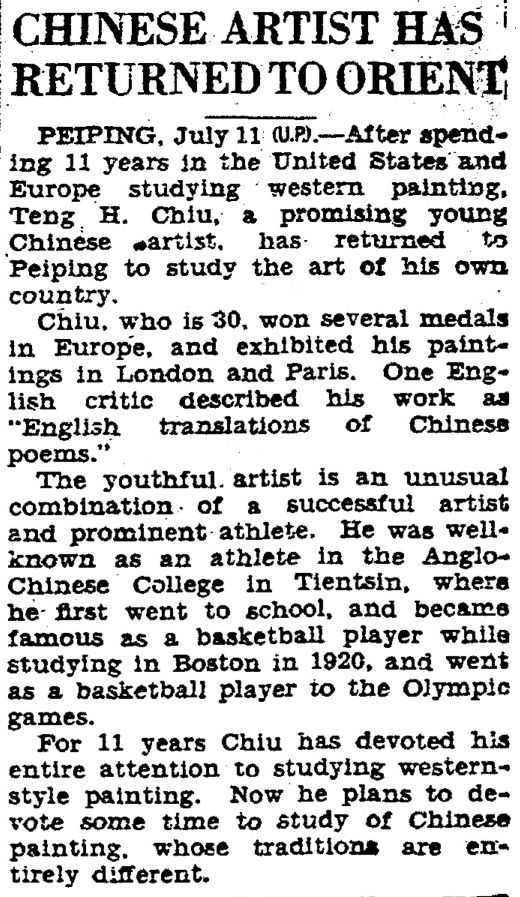 Mr. Chiu is one of those artists, whom Nature tries her best to wean from their love of Art. She has made him look anything but an artist. Any one may very well take him for a banker. His comfortable proportions, his broad plump face, his quietness, his decorous manner of attiring himself, his slow movements, his soft purring voice, his engaging smile, — all are qualities which one would expect in one’s banker: they do not inspire enthusiasm, but they certainly breed confidence. Now, one does not go to a banker to be rapt off the earth; that would mean panic, and panic is not a desirable state to be in, when one is considering financial questions. But one would be disappointed in an artist who, instead of communicating to one the feeling of transport (to use a Longinian expression), only leads one with the feeling of confidence. At the first contact with Mr. Chiu, it is just this feeling of disappointment that one feels. But it would be wrong to allow this feeling to persist. For if ever there is an artist in China, Mr. Chiu is certainly such a person. He has the body and appearance of a banker, but the soul and temperament of an artist. A slightly better acquaintance with Mr. Chiu will at once reveal to one all the traits of a genuine artist in him.

For one thing, he has the essential simplicity of an artist . His contact with the world is naked and direct. He has nothing up his sleeve. By this, I don’t mean to insinuate that his mind is simple. There is all the difference in the world between a simple mind and the sort of simplicity I have in view. By the “essential simplicity of an artist,” I mean that intense and undivided allegiance of an artist to his Art, which brooks no second love. He sees everything through the medium of his Art. He jealously keeps the medium transparent and pure, so that no secondary considerations eight of money or of material advantages will warp his vision of the world. He glories in the lust of the eyes and the pride of life. His wish, in the words of Sir Philip Sidney, is to make the too much loved earth more lovely still. To possess such a simplicity of vision is the sine qua non of an artist. Mr. Chiu has it. That he is not conscious of it stamps him all the more as an artist born, and not made. Mr. Chiu is one of the few Chinese, who have seriously studied western Art. Like all serious students, he has wisely decided to learn to walk, before attempting to fly. He has not tried to startle by any innovation, either in technique or design; but neither has he, on the other hand, tried to capture attention by bad workmanship, which in art circles is often euphemistically called “personal eccentricities.”


Mr. Chiu has studied for many years in America, England, and Paris. His academic record has been most brilliant. The Creswick Prize of 1926, and the Turner Gold Medal of; 1929 from the Royal Academy, London, are a few among the many signal distinctions, with which he has been honoured. He is a prophet not without honour, save in his own country. The reason for this, of course, is because Mr. Chiu hasn’t got the gift of the gap. To be a successful artist in China, it is not only necessary to paint well, but it is even more necessary to talk well…about one’s own pictures!

If I am asked, what are the qualities which characterize Mr. Chiu’s pictures, I would answer, — refinement of eye, and sensitiveness of hand. They are not, perhaps, the qualities which can make one enthusiastic. But what of it? Enthusiasm for Mr. Chiu’s pictures will come later when, with perfect mastery of his technique, he will have learnt to put more boldness into his brush.

(Tomorrow: Teng Hiok Chiu in Who’s Who in China)
Posted by Alex Jay at 8:00 AM