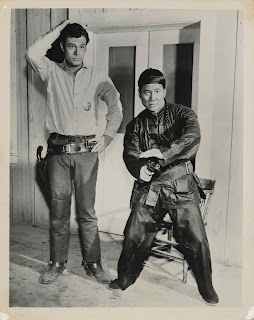 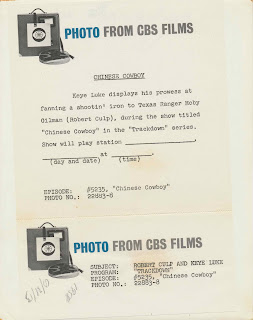 Top: Robert Culp and Keye Luke in a
publicity photograph for the TV series
Trackdown that aired September 19,
1958. The episode is “Chinese Cowboy”.
In the town of Porter, laundryman Wong
is harassed by Morgan and some of his
friends. They call him China Boy. Wong
buys a hand gun in the belief that the
townspeople will respect him. He prac-
tices shooting days and nights. Morgan
and friends damage Wong’s laundry shop
then cut off his queue. Wong, wearing
his gun belt, goes to the saloon and tells
Morgan to draw first. Morgan goes for
his gun and Wong shoots him dead. The
next day Wong packs his belongings and
prepares to leave. Some of the towns-
people implore him to stay but he refuses
and walks away with his donkey.
(Next post on Friday: The Memoir 1947)
Posted by Alex Jay at 8:00 AM