San Francisco Chronicle
(California)
August 30, 1935
page 12: Pear Blossom Arrives
That poor fellow Shakespeare—what would he do if he came to earth today?

Nobody would want him despite all the societies in his honor.

Well, that’s not exactly our opinion but that in substance is what Mrs. Li Ling Ai Hee, the Oriental Pear Blossom of Hawaii and China suggested when she said “China is the only land where Shakespeare would be at home today.”

And, good friends, before we go further into this we had better say a world or two about the Oriental Pear Blossom, Mrs. Li Ling Ai Hee.

According to Harry Carr, renowned traveler and conductor of the Lancer column in the Los Angeles Times, she’s destined to be a mentor in the movie and the literary firmament. That’s why he has sponsored her American invasion and arranged to have a book she has written published.

The Pear Blossom arrived yesterday aboard the Malolo from Hawaii and Harry was down to meet her. Clad in the best of Oriental garb, speaking a tinkling bell sort of English, she dazzled reporters by her beauty and confounded them by her knowledge of the western world and the theater in general.

It is the Pear Blossom’s contention that the Oriental drama and music as we now know it with all its cymbal crashing, fire cracker reports and general confusion is a product of the Tartar invasion about the time of Ghengis Khan and not the true Chinese.

“The real Chinese music and drama are soft, lovely and melodious,” she said, “There is no bang! bang! in it.”

Well, we’re no scholar but we’ll give the Pear Blossom cards and spades in her fight. The rest is up to her. Hollywood is reported agog to grab up this new Anna May Wong with the Phi Beta Kappa key. Good luck to you, Pear Blossom, that’s the sure footing up the ladder of success.

San Francisco Chronicle
(California)
January 17, 1936
page 3: Lurline Arrives Here
Miss Li Ling Ai—sometimes known as Plum Blossom. Miss Ai, an Hawaiian-born Chinese student, suffered a personal and business loss in the death of Harry Carr, the Los Angeles columnist whom she was coming to Hollywood to see. Carr was writing a book on Hawaii for which she was furnishing Hawaiian island racial and historical background. She proceeds to Los Angeles on the Lurline, her plans now uncertain.

The New York Times
February 5, 1937
Rex Delayed by Storm
Liner’s Captain Says It Was one of Worst in His Experience
The Italian liner Rex docked at the foot of West Eighteenth Street last night, delayed by storm for the first time in fifty-five voyages. Captain Francesco Tarabotto said it was one of the worst storms in his experience and that it lasted five days.

Mrs. Clara Gabrilowitsch, widow of the Detroit Symphony conductor and daughter of Mark Twain, left the chip with her arm in a sling and a bandage on her head. The injuries, not serious, were suffered when she was thrown against the side of her cabin in the storm. She was accompanied by her daughter, Nona. Rudolf Friml, the composer, and Miss Li Ling-ai, Chinese writer, were other passengers.

New York Post
May 7, 1937
page 19: All at Sea
Wherein a Lotus Diet Is Recommended to Ship News Reporters by a Miss Li
Some months ago we were on the Italian liner Rex and met a Miss Li Ling-ai, who rather floored us. Miss Li Ling-ai is a Chinese girl who is proud of her ancestors, and we think her ancestors should go for her.

We don’t really know how they do feel about her, but their ears must have burned the night we met her down the bay. Miss Li is passionately fond of Chinese tradition, and no sentence, to matter how Western in thought, is complete without several proverbs. Many of these little sayings have been in the family for years, being direct hand-me-downs from Miss Li’s ancestors.

It was through Mr. Rudolf Friml, who was a passenger on the same Rex voyage, that we heard of Miss Li. Mr. Friml told us of her charm and variety of talent Miss Li writes, dances, acts, is a linguist and an authority on political, educational and agricultural features of China.

Well, we have just received a letter from Miss Ling-ai, and we have never read or seen a letter quite so indicative of any one’s personality, including mannerisms.

We remember many details of our interview with the fascinating Chinese girl. Particularly do we recall the way she had of switching subjects, presenting each new thought in an entirely new manner.

And that’s just the way her letter looks. One page is in a flowing handwriting, another in a modernistic, authoritative penmanship and still another page looks most feminine and delicate.

The letter is from Honolulu and forthwith we give you samples: “Your story about me was forwarded here by our august friend Rudolf Friml, who usually keeps track of all Chinese subjects, not to say ship news reporters who write of things Chinese.

“Your article was written on February 5, and here it is April 5—but why rush an answer? I have been ‘eating lotus’ in these supposedly liquid sunshine islands which have turned out to be nothing but tropical rain and wind storms sans coziness, fireplaces or even comforting love—eh what?” The “eh what” gives you an idea of what we mean by Miss Li’s mixture of East and West.)

“My Chinese curiosity tempts me to ask you the identification of: the Chinese-like scholarly reporter who asked interesting questions when I was interviewed on the Rex; the political-minded, plumpish reporter with a foreign accent. I liked his sincere interest in China and his European air.

“The reporter with the reddish hair and clipped mustache. He would do well in Shanghai.”

Now what we liked about all that was the fact that some one caught on to the fact that ship news reporters aren’t floating questionnaires. We think it was very sweet of Miss Li’s to remember our handsome little group as individuals.

For Miss Li’s information: “the Chinese-like scholarly reporter” was John Sampson of the New York American. Recently a passenger asked him if he was Turkish. He was born in Liverpool, England; the political-minded reporter with the sincere interest in China is Alix Klimke of the Staats Zeitung; and the clipped mustache reporter who would do well in Shanghai covers ships for the New York Times. And by the way, he is doing all right here, Miss Li.

Miss Li remarked in passing that American reporters do not seem to eat as much lotus as Chinese reporters. This is just because we don’t have any lotus to eat.

There was an enclosure—a charming handkerchief which Miss Li invites us to “Honopocket” and a sandalwood sachet which we love. Our Chinese friend said, “it’s a breath of the West wind from the East.”

Miss Ling-ai invites us to Honolulu, where the newspapers “will stun you with good English rather than news. “Oh, no,” she tells us, “the papers here are not to be compared with American papers. They are not so voluminous, so you can read them thoroughly and still have time for a breath of wisteria in spring and incense on an autumn’s night.”

A very good idea, too, and we hope the POST will be the first American paper to tuck in a little wisteria and incense among its pages. 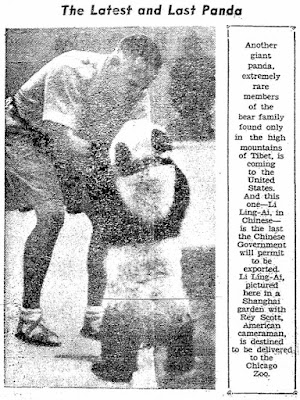 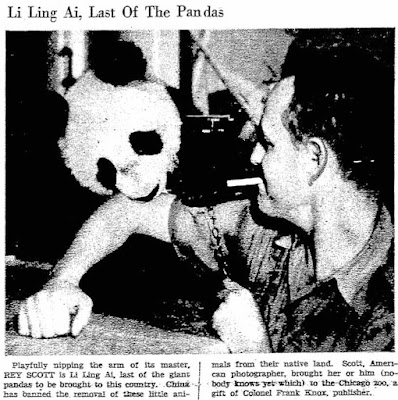