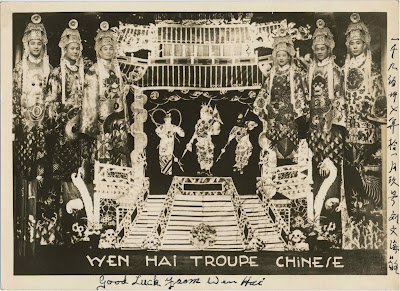 After touring Europe, the Wen Hai Troupe arrived in New York City on
April 2, 1937. Below is the passenger list with the names of the members.

Cleveland Plain Dealer
(Ohio)
February 14, 1938
The Wen Hai Troupe, with what even circus people admit is the finest ground bar acrobatics they have ever seen. One of the troupe spins around a bar, hanging on nothing but his shoulder blades. Figure it our for yourself—but darned if he doesn’t.

Cleveland Plain Dealer
(Ohio)
February 22, 1938
…And never—never anywhere—have you seen ground bar acrobatics like those demonstrated by a member of the Wen Hai troupe—in one of the outer rings.

The Oregonian
(Portland, Oregon)
June 10, 1939
Stage Show Pix Feature
Vaudeville came to the stage of the Pix theater Friday to run through Sunday.

…The Wen Hai troupe of Chinese acrobats bring a truly remarkable exhibition of their skill to the stage and proved tops with opening day’s audiences.

Seattle Daily Times
(Washington)
June 11, 1939
Film Rustics Due on Stage
The Colorado Hillbillies will appear on the stage and not eh screen at the Palomar Theatre starting tomorrow when they share the vaudeville spotlight with the Wen Hai Troupe, Chinese novelty artists, and also share musical honors in the new Gene Autry picture, “Blue Montana Skies.”

The Colorado Hillbillies come to Seattle with rustic tunes and rhythm, the type of presentation that has made them known on stage and screen. The Wen Hai Troupe, making its Northwest debut at The Palomar, after successful engagements in some of the biggest theaters in the East, offers novel Chinese specialty acts featuring difficult feats of balance and strength.

Most of the opening-day applause deservedly went to the Wen Hai Troupe. There have been scores of acrobats doing scores of balancing and juggling stunts before The Palomar footlights for a long time now, but most of those performed by these five unassuming Orientals in their bright costumes are doubtless new even to the vaudeville veterans. 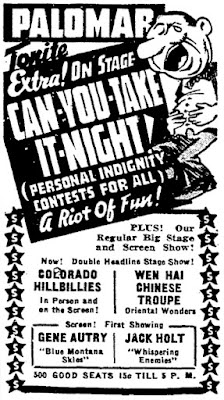 Illinois State Journal
(Springfield, Illinois)
June 29, 1939
State Fair Revue Plans Completed
Plans have been completed for the presentation of the Illinois state fair revue of 1939. The show will open Monday night, Aug. 14, in front of the grandstand and close Saturday night, Aug. 19.

…A few of the attractions in the show will be the Wen Hai troupe of Chinese acrobats and tumblers; the King trio, equilibrists; Burvedoll sisters, dancing xylophonists; the Kay Foursome, dances, and Chang, Chinese magician.

Rockford Morning Star
(Illinois)
July 25, 1939
Palace
The Hollywood Vanities revue come to the Palace theater today for a three-day engagement and features the well-known comedy dancers, the Albins, who title their offering “The Nutmost in Dancing.”

Other acts of the revue include Ballard and Rae, “Those Gay Inebriates,” and Ray Vaughn, who presents a musical novelty, Warner and leigh, singing stars, Martin Barnett, magician, and the famous Chinese acrobatic act, the Wen Hai troupe…. 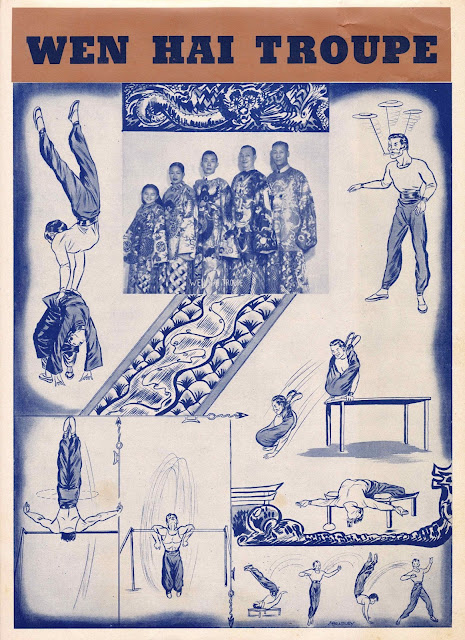 Schang Csi Hua has not been in the act since Saturday night because he has been in County Jail. The only reason that Leo Wen Hai, head of the troupe, has remained in the act is that he was able to put up $1,500 cash bail.

The two men were arrested by immigration authorities following the Saturday night performance because, according to Vernor W. Tomlinson, head of the immigration office in Cleveland, they overstayed their a looted time in the United States. Tomlinson yesterday set the case for a hearing next Friday, when Wen Hai and Schang will be called upon to show cause why they should not be deported.

Tomlinson said the two Chinese entered the country at New York April 2, 1937. They originally were admitted for only six months to allow them to exhibit their talents with Ringling Brothers and Barnum & Bailey Circus. Tomlinson said there were four extensions of leave to remain from time to time, but they had been ordered to depart by last Jan. 15.

When Hai, resplendent in the gold-embroidered robe in which he appears in the circus ring, sat on a backstage bench at the Arena last night and poured out his story. He was insistent that he was “100 per cent right,” and had been done wrong by certain lawyers whom he named.

The acrobat said that Ringling Brothers and Barnum & Bailey brought his troupe of nine members—six acrobats and three non-performers—from London in 1937. He said the circus put up a bond of $9,000 to insure the departure from this country of the troupe members at the end of their a looted time.

On June 23, 1938, the strike shut down the circus, Wen Hai said, and his troupe and the circus went there separate ways. On Dec. 30, 1938, he related, he talked to John Ringling North, who was quoted by the acrobat as saying he would see that the bond was continued if Wen Hai would pay the premium on the bond from 1939 on at the rate of $20 for each troupe member. The group had lost one of its members and then had only eight. Wen Hai said, which made him pay $160 a year.

In 1939, Wen Hai continued, Lui Bao Shu, his wife and child and Whang Lo Ling left the troupe and North asked Wen Hai to continue paying the premium for them. Wen Hai said he replied that he would pay only for himself, his wife, the child and Schang Csi Hua.

Then Wen Hai brought forth a paper which purported to show that Lui Cao Chu and Whang Lo Ling had paid $310 to a lawyer for their part of the premium and further extensions. Wen Hai said they actually paid $480, but had been given a receipt for only $310.

On Jan. 15, Wen hai said, he received a telegram from Herbert Du Val, attorney for Ringling Brothers and Barnum & Bailey, saying that he should leave the country immediately, that his time was up and the bond was being discontinued.

Wen Hai said he went that night from Chicago, where he had been showing with his troupe, to New York. He said Du Val told him that he (Wen Hai) owed a Washington attorney $75 for services and $185 for premiums. Wen Hai said he “was stubborn” and said he wouldn’t pay. He said he went back to Chicago and consulted another lawyer, Harry P. Munns. Munns advised, according to Wen Hai, that the Washington lawyer be paid, which was done.

Kansas City Star
(Missouri)
March 6, 1941
Fun From Many Lands
The Tower Presents “International Revue” on Stage.
Europe and China Are Represented, While Screen Offering Brings in Arkansas as Well.

“International Revue” is the name of the stage offering that will open at the Tower tomorrow. The acts all are new and have been recruited from various countries.

…The Wen Hai Chinese troupe consists of five Oriental performers who specialize in sensational athletic feats. They have played in twelve different countries and once were featured with the Ringling Brothers and Barnum and Bailey circus. 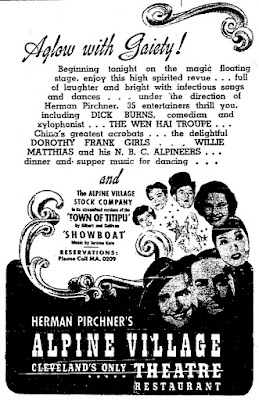 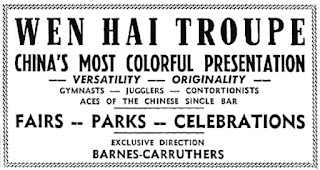 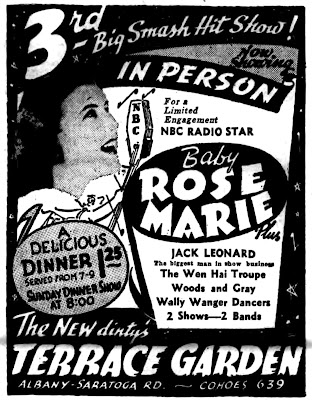 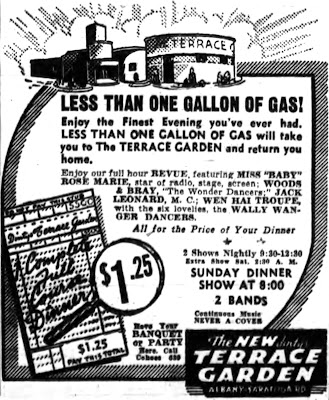 The Boston Traveler
(Massachusetts)
May 26, 1942
As object lessons in the value of a “daily dozen,” Pao Shu, aged fifty one and Chung, aged fifty, agile members of the Wen Hai Troupe at the Latin Quarter, are worthy of note. These gentlemen hail from the northern parts of China where men are taller and stronger and since they were six years old they have been acrobats. Their appearance belies their age so completely that patrons are amazed when they learn their ages. 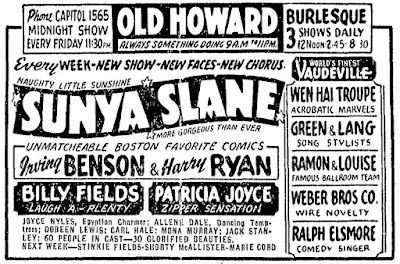 The next big attraction at The Rec Hall will be “Just for the Ride.” Another of the USO camp-show units, this unique musical comedy revue will appear here on Nov. 17, at 6:30 and 8:30 p.m. This production, is of course, presented admission free.

…Following are the people who will appear in person: 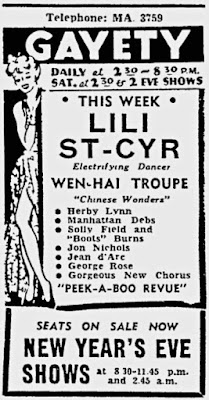 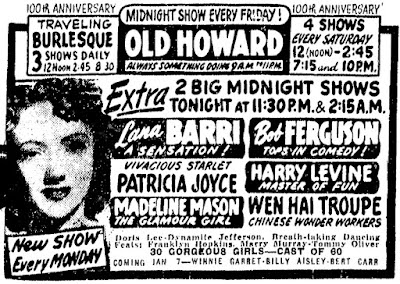 
(Next post: Oriental Brothers aka South China Troupe)
Posted by Alex Jay at 8:00 AM