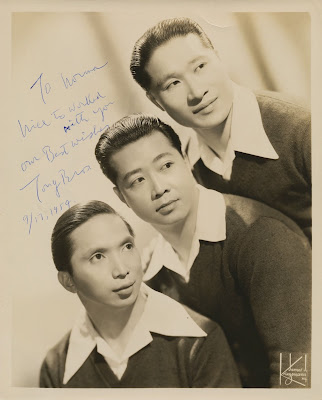 The Evening Star
(Washington, DC)
November 10, 1949
After Dark
It Seems Those Tong Brothers Will Give You a Dizzy Sensation

Once upon a time the drama department was startled by a request from a South American country for permission to reprint some of its comments on movies. The drama department said go ahead, but is has suffered since from a gnawing collective worry over how its idiom sounds translated into Spanish.

Any writer who ever found himself enmeshed in irregular French verbs becomes skittish and ill at ease at the very thought of transporting his words from one language to another. There is no reassurance offered, either, by a booklet which has just arrived here, telling about the Tong Brothers, who are to headline the big fall opening show at the Lotus a week from tonight.

The Tong Brothers seem to have stood Europe on its ear and that will not sound any funnier in French than some of the French reports on them sound in English. One page, a translation “of the French Critics,” in the newspaper, Istanbul, of Mardi, 14 Octobre 1947, reads:

“These three young Chinese equilibrists the Tong Bros. of whom the whole city of Istanbul is talking about, are still having the greatest success after being three months at the Municipal Casino in Maxim.

“They display to us original tricks of acrobatic and balance with handsome ability and easiness, such tricks as they started to practice upon since their very early youth, in 1930. They were then members of the well-known troupe, ‘South China’ and later of the ‘Oriental Brothers’ travelling throughout all big European cities, performing in such important establishments as the ‘Palladium’ and the ‘Holborn Empire Theatre’ London; the ‘Alhambra’ and the ‘Empire Theatre’ Paris; ‘Scala’ and ‘Wintergarten’ Berlin, etc. etc.

“There is an old saying in the United States about: ‘Damn clever those Chinese.’ Accordingly, they are in fact, ‘Damn clever’ those Tong Brothers.”

A translator who make “Oui, oui ils sont wraiment,”come out “Accordingly, they are in fact” is suspect of course. There are, however, a few more European reports on the Tong Brothers, which should be passed along, so you will know what the Lotus is preparing by way of an autumn celebration. They are, to wit:

“…as the famous Hungarian critic Maral Sandor says about the 3 Tong Bros. ‘Something so difficult, yet done in such an easy way, they are not only a team of first class entertainers but prove to be also, an artistry of high class born in them’,”—Budapest, Vilagosag, 1 June 1946.

“…the Tong Bros. is such a great attraction that keeps the spectators spellbound.”—Budapest, Esta Kuir, 5 June, 1942.

“…As to the Tong Bros. their spectacular number is one of the most terrific of its kind. The easy-going motion with which the 3 Chinese play with balance is worth all the big applause they receive every night at the Casino.”—Istanbul, Istanbul, 29 August, 1947.

“…at the ‘Miami’ night club, since last week a fine attraction the 3 Chinese ‘Tong Bros.’ make their appearance with first to be seen acrobatic tricks that give you a dizzy sensation.”—Athens, Aneksartisya, 2 February, 1946.

“…as for instances that bottom-man who lies down holding both partners in Handstand, one on his hand and the other on his feet, and then plays with balance by turning his body over…Such tricks as demonstrated by the 3 Chinese have not yet been seen at the ‘Wintergarten’.” Berlin, Berliner Zeitung, 4 January 1942

The Spokesman-Review
(Spokane, Washington)
May 1, 1959

The Spokane Daily Chronicle
(Washington)
May 2, 1959


(Next post: Nanying Stella Wong’s Chinatown Watercolors)
Posted by Alex Jay at 8:00 AM