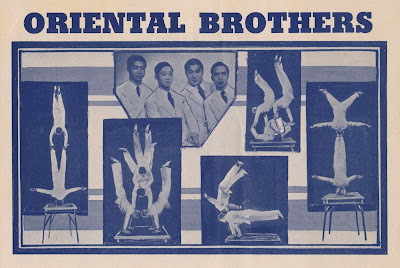 Twin Falls Times News
(Idaho)
July 26, 1981
The world’s best headstand—but he should have saluted
Seattle (UPI)—He may have been the only man in the world who could do a headstand on top of another man’s head, but that didn’t stop the Gestapo from breaking Heni Chaw’s nose when he failed to salute Adolf Hitler’s picture.

Chaw retired this month from the building maintenance staff at the King County courthouse where few of his fellow workers realized that he once was a member of a famed Chinese acrobatic troupe that performed all over the world.

The nose-breaking incident occurred in Czechoslovakia in 1944 the day before Hitler’s birthday. Chaw had forgotten it was the eve of the date of the Fuhrer’s birth and that was a grievous offense in Nazi-occupied Europe.

Chaw’s troupe was trapped in Europe at the outbreak of World War II and jobs were hard to find except in Germany and German-occupied countries.

The acrobats were “liberated” by the Red Army in 1945, but spent 100 days in a Russian concentration camp and their daily food ration was a half-can of soup, Chaw said.

Finally they were released and made their way to the United States. The troupe appeared annually on the old Ed Sullivan television show for seven years between 1952 and 1959.

They also worked with the Harlem Globetrotters for seven years, doing their acrobatic act during halftime at Globetrotter basketball games.

“We practiced eight hours a day for six months before we ever went on stage,” said Chaw. “We started the act in Hong Kong and were together until 1959. It was the longest acrobatic partnership in history.”

The troupe performed extensively in Europe during the 1930s. Hitler saw their act twice, once in Berlin’s Winter Garden Theater before the war and again in Munich during the early part of the war.

They also performed before Benito Mussolini, Great Britain’s King George VI and many other European rulers in pre-war days.

“They started out as the South China Troupe,” changing the name to “Oriental Brothers” in the early 1940s [in 1939]. Sometimes they performed as the “Original Brothers.”

Their double-headstand is an acrobatic feat that has never been duplicated to Chaw’s knowledge.

He was the top member of the team, who would stand on his head atop his partner’s head. The partner would step atop a table, then step down while the upside down Chaw kept his precarious balance.

That headstand left a callused ring around Chaw’s head which can still be felt when the former acrobat lets visitors run their hand across his forehead.

The troupe finally broke up in 1959 when one of the partners decided to go into the restaurant business.

Chaw moved to Seattle to settle down because “I’ve been all over the world and I find this is the nicest climate.”

He and his partners still correspond with each other and Chaw plans to visit them after he retires from his county job.

Chaw, who speaks Chinese, English, German, French and Hungarian, also plans to write a book about his experiences.

He learned to repair watches after moving to Seattle and he will keep that sideline going, so Chaw definitely is not going to vegetate in retirement. 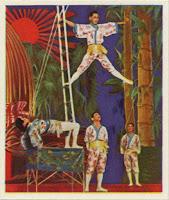 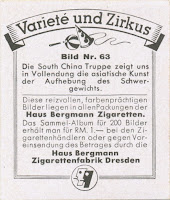 (Next post: The Tong Brothers)
Posted by Alex Jay at 8:00 AM