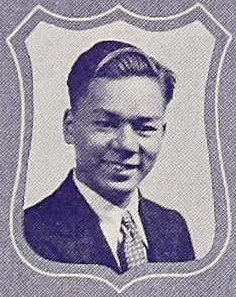 Monroe Tom Leung was born in Los Angeles, California on April 19, 1915. According to the 1920 U.S. Federal Census, he was the seventh of eight children born to Tom and Wong. The family lived in Los Angeles at 1619 Pico Street. His father was a salesman of Chinese herbs. Their address was the same in the 1930 census. His father was a “herb doctor” who had his own office. Leung attended Los Angeles High School (left, 1934 yearbook photo). The family remained at the same address in the 1940 census.

Monroe wanted to go to art school, but there was no money

for that, so he did jobs. (Papa had recognized Monroe’s talent
for art and one Christmas, when Monroe was about 14, bought
him a drawing board, which he hid at the office. Monroe
happened to see it, but didn’t let on.) Against the odds, he got a
job as a beginning artist at Warner Brothers cartoon studio.
Monroe had a wonderful sense of humor, demonstrated in the
cartoons he drew. In later years, he occasionally sold cartoons

He served with artist Wayne Thiebaud. Charles Strong interviewed Thiebaud who recalled the motion picture unit’s project and what happened after the war.

CS: The one assignment that sounded rather ominous was
where you were making maps for the Japanese invasion.

WT: That was very late in my service….I went through an
investigatory procedure to see if I could be assigned to a secret
project. And the secret project turned out to be located in the
old Hal Roche Studios, redesigned to make this elaborate, full
scale map of Japanese islands. And the artists were pulled there
to make these models from stereoscopic photographs to make
these amazing reduplications of the Japanese islands, which
were photographed as if the pilots were actually flying over them.
Overhead cameras would move over them with fake clouds
coming under them and everything so that the pilots could have
dead reckoning for bombing. It was such an effective plan and
project that it got a medal of commendation. But I got there on
VJ Day, so I ended up playing basketball with Ronald Reagan
who was one of the commanding officers, and I also worked
throwing out films, and actually doing some films on evacuation
instruction. Then I was discharged.

CS: Fascinating. So what happened after the war?

WT: I went back to try to sell cartoons in New York and went
with another cartoonist friend, Monroe Leung (we were in the
service together), a wonderful fellow. After about a month he
decided to come home, and I ended up trying to sell cartoons.

One of Leung's cartoons was published in Chinatown and China City in Los Angeles (2011). Leung was a watercolorist, too. The Collected Best of Watercolor (2002) featured one of his works.

(Tomorrow: Monroe Leung Cartoons)
Posted by Alex Jay at 8:00 AM