Denver Post
(Colorado)
December 23, 1916
Chinese Wins Fame and Wife He Pledged in Art Institute
Chicago, Dec. 23.—Three years ago Miss Fannie King met Chin Yuk Sun while both were studying here at the institute. Chin found her to his liking and promised undying devotion, but she was young then. So they parted for two years.

In the ensuing two years Chin tasted fame. His art establishment grew and he hired three other Chinese artists. He designed the roof garden for the Hotel La Salle and supplied department stores with their lacquer work.

Two months ago she surprised him in his office writing a letter in Chinese, and her feminine curiosity asserted itself. He blandly explained that he was writing to a Chinese girl in San Francisco to ask her to marry him. She coyly suggested that he was going to remote regions in search of a wife. The letter remained unfinished. 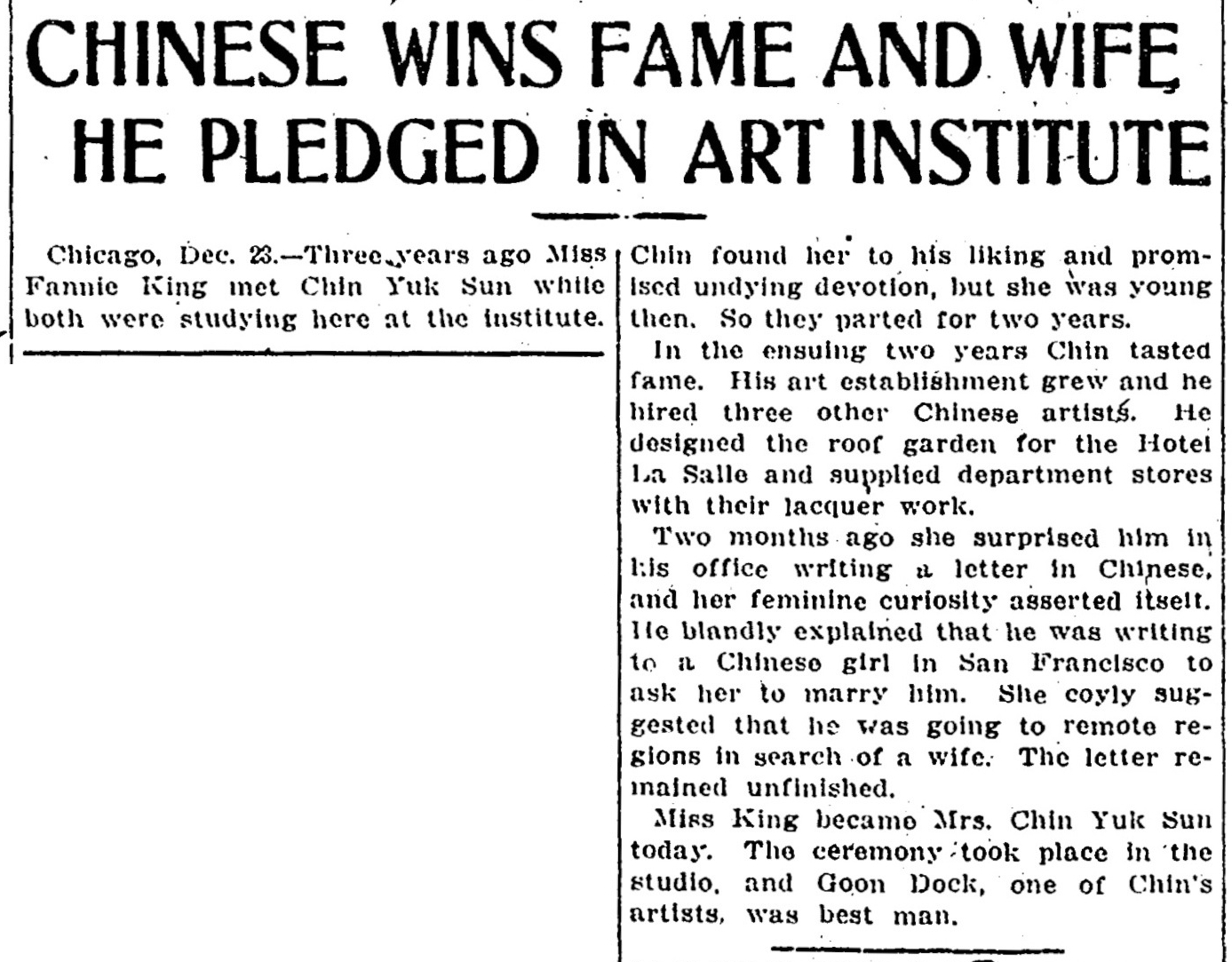 Fort Worth Star
(Texas)
December 24, 1916
Chinese Artist’s Romance Blasted by American Girl
Chicago, Dec. 23.—Chinatown’s romance turned to dross Saturday. the district is in a vale of tears caused by the sudden blight which descended upon the love affair of Chin Yuk Sun, the Chinese artist.

Chin’s heart is heavy. He was to have been married Saturday to Miss Fannie King, also an artist. The telephone rang and Chin answered it. He returned crest fallen.

“It’s all off,” he said to the gathering. “She just telephoned to say that she wouldn’t marry me. And she won’t been tell me why. Tragedy has come into my life.”

Miss King, when interviewed, gave a very good, though laconic reason why she called off the ceremony. 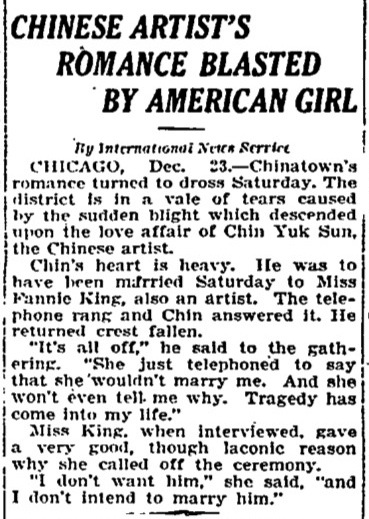 Daily Telegram
(Adrian, Michigan)
January 6, 1917
Girl Married Chinese
An International Romance Began at Chicago Institute.
Chicago—Three years ago while a student at the Art Institute Chin Yuk Sun met Fannie King, also a student. Their work brought them together a great deal and they became very well acquainted. But he left the following year for his annual trip to China, where he first studied to be an artist.

When he returned to Chicago he could not locate Miss King but Fate was kind to him, for she saw an article in the paper that told of the great work he was doing in the large hotels and stores in Chicago, and she went and found him, and then the romance started. They took out a license and were married a few days aago [sic].

Mr. Sun was born in California 30 years ago, and began to do painting when about six years old. A number of his paintings are in the Hotel La Salle and Loop stores. 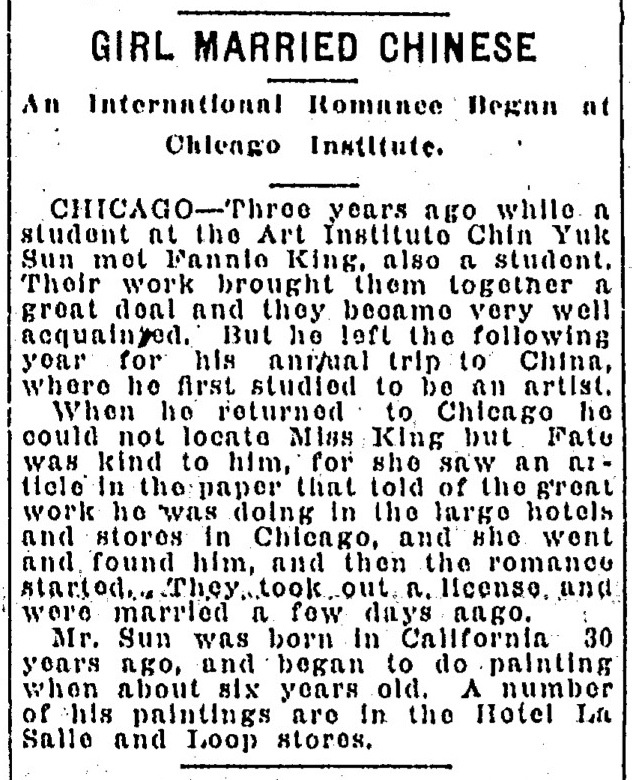 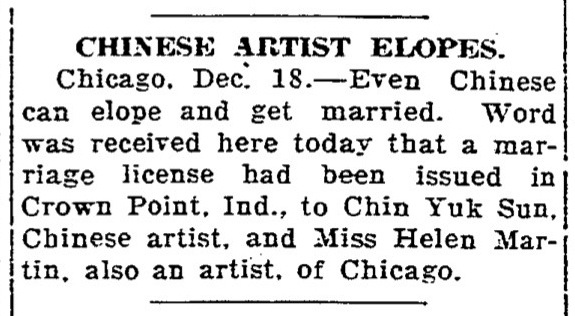 Denver Post
December 20, 1917
‘Wife’ Says Married; Chinaman Says Not
Chicago, Dec. 20.—If you take Chin Yuk Sun’s word for it, he isn’t married. However, his “wife” says he is. It is known, nevertheless, that he obtained a lincense [sic] to marry her. She was Miss Helen Martin of Chicago. He is the Chinese artist who designed the roof garden of the Hotel La Salle. “Miss” MArtin said also that she had been divorced from a former husband only five days ago, but refused to give his name. 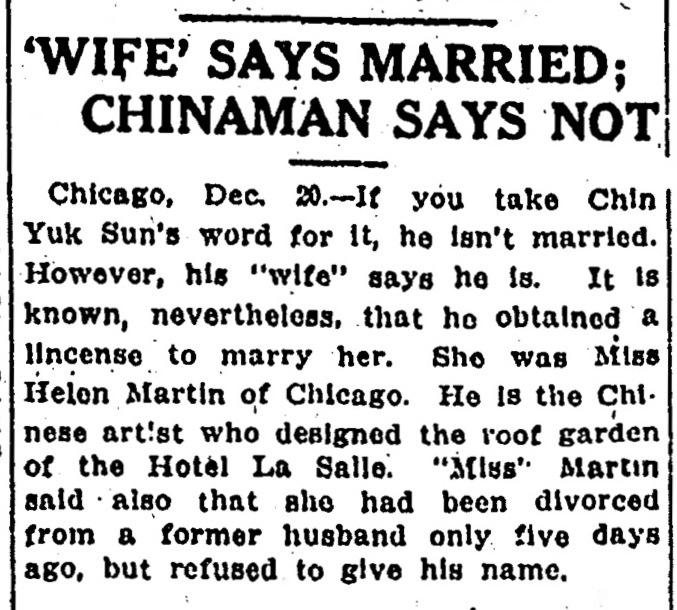 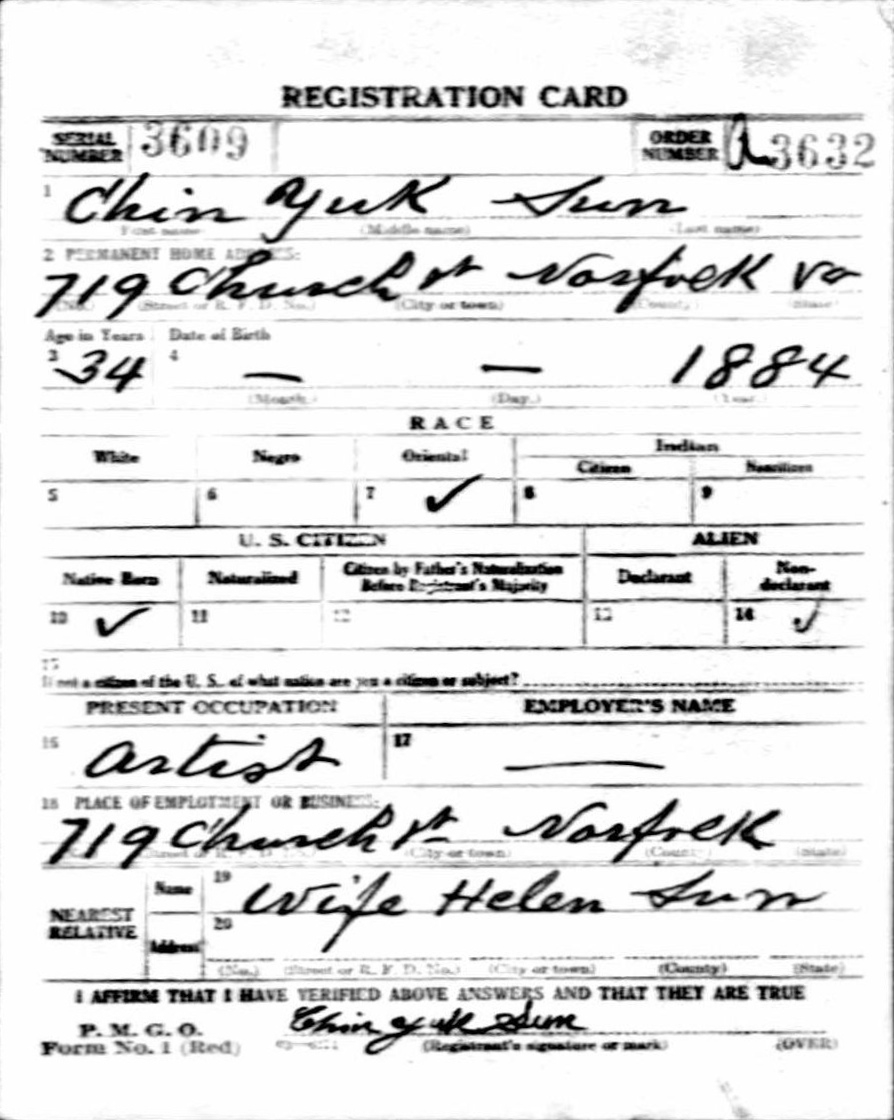 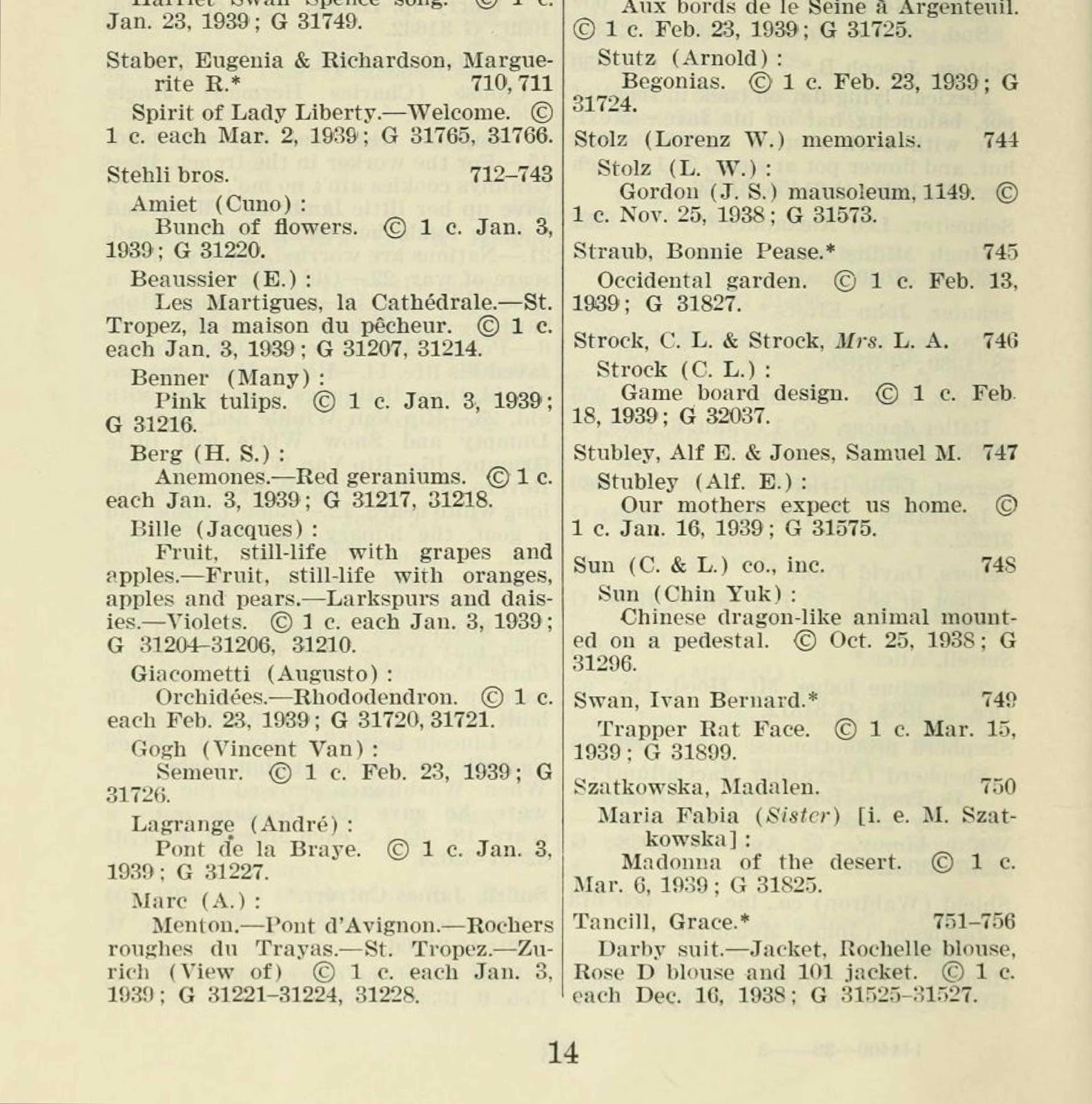 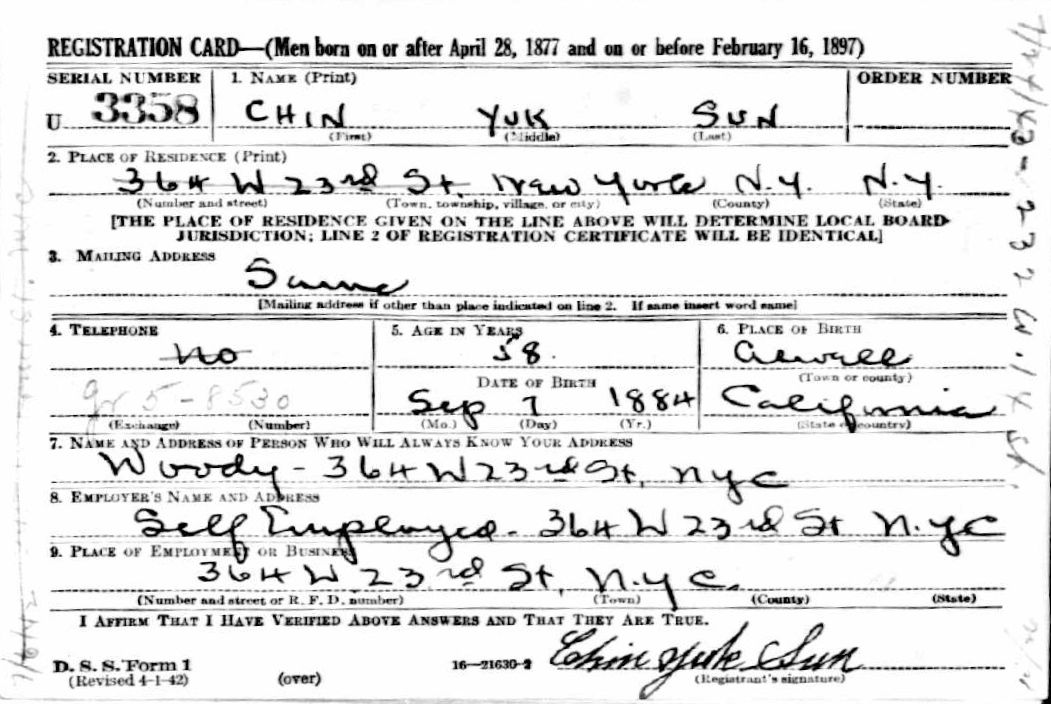 Official Gazette of the United States Patent Office
January 29, 1943
p179: U.S. Patent Office, Richmond, Va., January 29, 1943.
Chin Yuk Sun, his assigns or legal representatives take notice:
A petition for cancellation having been filed in this Office by James L Younghusband, 30 W. Hubbard St., Chicago, Ill., to effect the cancellation of trade-mark registration of Chin Yuk Sun, 40 Bowery, New York, N.Y., No. 300.933, dated February 14, 1933, and the notice of such proceeding sent by registered mail to the said Chin Yuk Sun at the said address having been returned by the post office undeliverable, notice is hereby given that unless said Chin Yuk Sun, his assigns or legal representative shall enter an appearance, therein, within thirty days from the first publication of this order the interference will be proceeded with as in the case of default. This notice will be published in the Official Gazette for three consecutive weeks.

The New Yorker
June 29, 1963
Hamilton-Madison House, 50 Madison Street
Exhibition of paintings and drawings by a dozen Chinese men who are members of Hamilton-Madison’s Golden Age Club.

“How long have you been painting?”...

...“Fifty years,” replied Mr. Chin, in super-booming Cantonese. “I studied in China as a boy, and at the Chicago Art Institute when I was thirty years old. I like to work in oils, because they last, like me. I’m eighty-four years old. I can’t see worth a damn, though. I don’t wear glasses, because when I wear glasses I can’t see anything at all!”