Very little is known about the photographer Wai Cheu Hin who had a studio, in 1890s, at 800 Stockton Street in San Francisco, California. Two of his portraits can be viewed at California Revealed, and in the 2008 book, Asian American Art, A History 1850–1970, page 481, portrait of a young girl.
More is known about the building at 800 Stockton Street. An article in the May 1881, The Gospel in All Lands, said

The church’s first home, a two-story building at 800 Stockton Street, housed the chapel, several classrooms, Dr. Speer’s study, and his family. Speer campaigned actively for better treatment of the Chinese. ...

Philip P. Choy, in his 2008 book, The Architecture of San Francisco Chinatown, wrote

Further evidence of Western architecture in Chinatown exists in church buildings. It would have been sacrilegious to won converts under the roofs of heathen temples. The first Chinese church in America was established by Reverend William Speer and four Chinese—Atsun, Lai Sam, A-tsen and Hi Cheong Kow in 1853 at 800 Stockton Street.

Another Monster Seizure of Opium.
Two Hundred Thousand Dollars’ Worth Confiscated.
Chinese Caught Forging the “Thomas” Stamp—Ten Thousand of the Latter Purchased for Fifty-five Cents Each.
... What led to the discovery was the fact that on the forged strips the word “opium” was lower than the word “domestic,” and a greater space intervened. The letters were slightly longer, and other small differences existed. To uproot the gigantic fraud, which threatened to dissolve the revenues from the opium traffic, was the all-absorbing topic. It was deemed to make a raid on Chinatown for the purpose of seizing every can and jar bearing Thomas’ signature.
The descent on the opium marts was made simultaneously by Deputy Surveyor Gaskill and nine men, and Collector Quinn and twelve men, accompanied by Interpreter Rickards. At the same time and for hours previous the two Government Inspectors, Noyes and Pattison, had been following up clew after clew, until they found the place and the man who had made the forgeries. Ten thousand more were found in his apartment at 1023 Stockton street. He gave the name Wong Gee On, and at 710 Commercial street an uncle of Wong Gee On was found, and in his apartment several pieces of paper which bore evidence of having been practiced upon with Thomas’ name. ...

Wai Cheu Hin was a suspect in the forgery scheme. The Call, August 17, 1891, reported

Government Patrol.
Revenue Officers Watching Chinatown for Opium.
Chinatown was kept in a turmoil of excitement all day yesterday by the presence in its dirty thoroughfares and the constant surveillance of its stores by the Customhouse, Internal Revenue and special Government, inspectors. From early morning until late at night a constant patrol was established, the object being to prevent the transfer of opium and evidence. There were no seizures made or attempted and no arrests. Those taking part in following up the “Thomas-stamp” forgeries yesterday were Revenue Collector Quinn, Revenue Agent Thomas, Deputy Revenue Collectors Lambert and Simon and Special Government Detectives Noyes and Pattison.
Ah Gow, the Chinaman who was thought to be the actual forger of the “Thomas stamp,” was the special object of the day’s hunt. He was not found, though another was; but the latter’s case was too precarious to justify arrest on the strength of the evidence against him. Ah Gow is considered by Thomas and several others to he a myth of the creative imagination of Quong Gee On, who is now in jail, and who gave out the story of Ah Gow’s connection with the forgery. If Ah Gow exists, says Agent Thomas, he will be apt to turn out a white man. In the meanwhile Quong Gee On spends his time in jail practicing writing.
Wai Chen [sic] Hin, a photographer at 800 Stockton street, is suspected as being either the leader or one of the active conspirators in the scheme to defraud the United States of its revenues. His opium was stamped the last of all on April 21st last, and it is this date that is marked on the forged opium stamp. His profession as photographer would aid him considerably in making copies of the signatures. Startling developments are looked for in a couple of days.

Wai Cheu Hin was never charged with a crime. His name appeared one more time in the Call, August 18, 1891.

Thomas Stamp Fraud.
The Forger, a Chinese, Caught by the Government.
Developments That Throw a Flood of Light on His Operations—Work of the Analytical Chemist.
Yesterday’s developments in the Thomas stamp forgeries were all the most sanguine Government inspector would dare hope for. The actual forger was found, his identity and the fact that he bought the paper and had it cut were established beyond the shadow of a reasonable doubt.
The wily forger is a Chinese named Wong Gee On, a teacher of English writing, which trade he follows between his frequent orgies at the pipe. He is counted by his countrymen “a sharp bum.” His place of business was at 800 Stockton street, where he has a room next [to] the photograph gallery of Wai Chen [sic] Hin, who is suspected of having aided him in his writing.
On June 10th last Wong Gee On called at Klinker’s rubber-stamp manufactory and ordered three stamps—one with the date March 27th,” another the word “domestic” and the third the word “opium.” In the genuine Thomas stamp the last two stamps are included in one. It was this that led to the discovery, for the two words, being put on separately, were seldom in alignment. There was another date used—April 21st—but it has not yet been traced.
Wong Gee On then, accompanied by a paper expert, called on a Kearny-street paper company and bought 140 sheets—more than a ream of paper—of the same texture and color as the strips used by Thomas. These were cut into strips of the proper width at 507 Sacramento street and taken by Wong Gee On to a certain address on Washington street, near Dupont. Thence all trace of them is lost, until they issued as the “Thomas stamp.”
A white man is known to the Government as being interested in the sale of the stamps, but so far as the forgery is concerned his connection therewith has not been established. Yesterday the Government detectives and Revenue Agent Thomas called at the County Jail, where Wong Gee On is incarcerated. He was asked to write the name “B. M. Thomas,” which he did, establishing beyond all doubt his actual authorship of the forgeries.
Collector Phelps has the drug and analytic chemist of the revenues at work upon the opium seized, trying to determine imported from the domestic. The former will be seized, while the latter must be given over into the hands of the Chinese, except where forged stamps are on the cans. 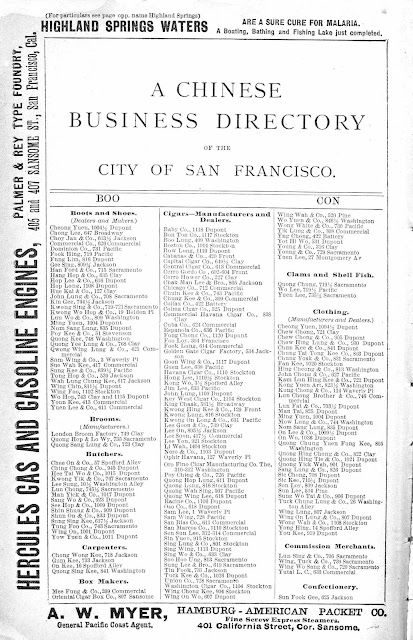 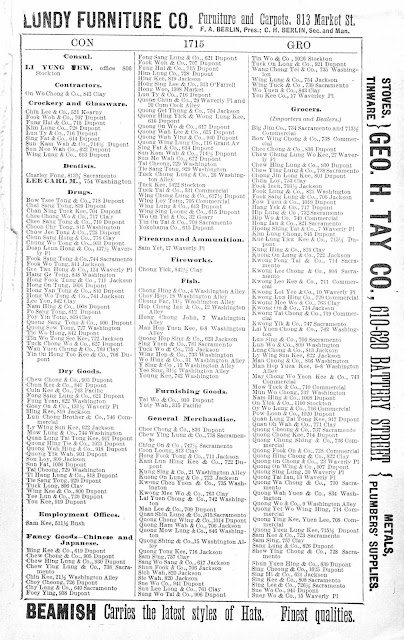 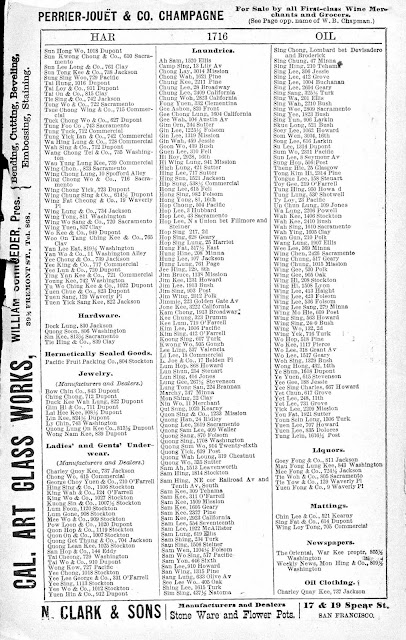 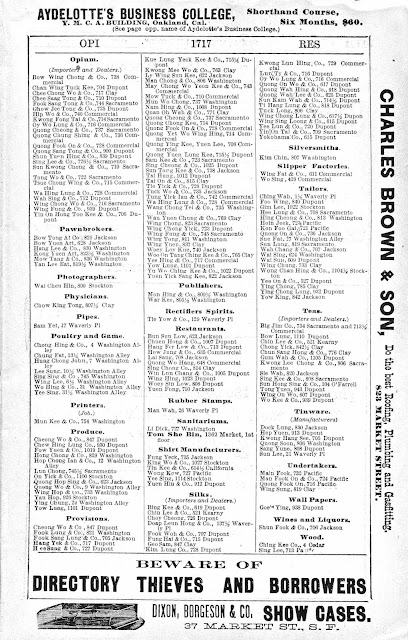 What became of Wai Cheu Hin after 1894 is a mystery.
Further Reading
Picturing Chinatown Art and Orientalism in San Francisco
Anthony W. Lee
University of California Press, 2001
Pages 29 and 203 to 204.
With New Eyes
(Next post on Friday: Jake Lee’s “A Midsummer Night’s Dream”)
Posted by Alex Jay at 8:00 AM