Cartoon: There Goes the Neighborhood 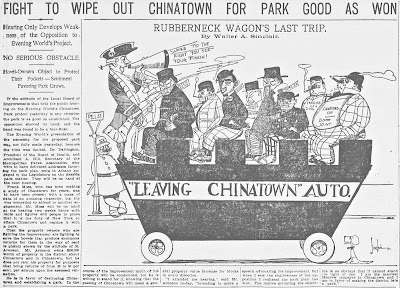 Hearing Only Develops Weakness of the Opposition to Evening World’s Project.

If the attitude of the Local Board of Improvements that held the public hearing on the Evening World’s Chinatown Park project yesterday is any criterion the park is as good as established. The opposition showed its hand, and the hand was found to be a four-flush.

The Evening World’s presentation of the necessity for the proposed park was not fully made yesterday because the time was limited. Dr. Darlington, President of the Board of Health, and Archibald A. Hill, Secretary of the Metropolitan Parks Association, who were to have delivered addresses favoring the park plan were in Albany engaged in the Legislature on the Seaside park matter. They will be on hand at the next hearing.

Frank Moss, who has been making a study of Chinatown for years, was to have been present with a mass of data of an amazing character, but the [sic] was compelled to attend to another engagement. Mr. Moss will be on hand at the hearing two weeks hence with facts and figures and people to prove that it is the duty of New York to efface Chinatown and replace it with a park.

That the property owners who are fighting the improvement are fighting to save the hovels that produce enormous returns for them in the way of rent is plainly shown by the attitude of R. Aronson. Mr. Aronson owns $500,000 worth of property in the district about Chinatown and in Chinatown, but he does not rent his property for purposes that bring returns of from 35 to 50 per cent, per annum upon the assessed valuation.

He is in favor of destroying Chinatown and establishing a park. In the course of the improvement much of his property will be condemned, but he is willing to stand for it, knowing that the passing of Chinatown will mean a general property value increase for blocks in every direction.

“I attended the hearing,” said Mr. Aronson to-day, “intending to make a speech advocating the improvement, but when I saw the shallowness of the opposition I realized the park plan has won. The motive actuating the objectors is so obvious that it cannot stand the light of day. I am the heaviest Hebrew taxpayer in Chinatown and I am in favor of making the district into a park.”