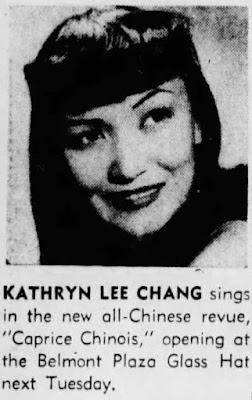 Harry Kilby, who booked the show, claimed he had to go all the way to Montreal for two of the chorines.

An all-Chinese revue, “Caprice Chinois,” opens at the Belmont-Plaza’s Glass Hat Tuesday—probably the first such show in a local hotel spot. It will offer Chinese acts and Chinese chorus girls.

New York Sun
April 3, 1944
Cafe Life in New York
All-Chinese Revue Opens Tomorrow in the Glass Hat—Other Events
An all-Chinese revue, “Caprice Chinois,” opens in the Glass Hat of the Hotel Belmont Plaza tomorrow night, starting a week of furious activity in the cafes, tax or no tax. The cast is entirely Oriental, but the theme will be expressed in Occidental tempo and costuming.

The show, produced by Don Arden, will be headed by Peter Chan, comedian and singer, who was formerly in “Hellzapoppin”; Kim, the magician; Mei Lings, dance team; Kathryn Lee Chang, singer; The Wong Sisters, dancers, and a line of Chinese girls.

New York Sun
April 6, 1944
Cafe Linfe in New York
Tonight’s Openings
…The beautiful revue at the Glass Hat of the Hotel Belmont Plaza, “Caprice Chinois,” played by an entire Chinese cast, which includes Peter Chan, Mei Lings, Kathryn Lee Chang, Kim the Magician and the Wong Sisters, is held over until the end of the month. Host and Maestro Mickey Albert and his orchestra are featured.

Brooklyn Eagle
(New York)
April 7, 1944
Going Places
Once again the Glass Hat of the Belmont Plaza has come forth with an attractive revue—this time called Caprice Chinois; so you can guess it is an all-Chinese entertainment. However, it is very much American-Chinese. The dancing is of Occidental tempo and the costumes very Hollywood with only the Chinese influence in design, and perhaps coloring. It is hard to say just who is the star of the show, for they are all engaging as well as talented. Kathryn Lee Chang, the singer, is definitely a charmer, not only lovely to look at but having a most pleasing voice. Peter Chan, formerly featured in “Hellzapoppin,” is the star comedian and singer. He startled his audience by announcing that h  would sing a little song he learned in childhood. Of course, every one was expecting a Chinese lullaby when he burst out in a fine voice with “When Irish Eyes Are Smiling.” Kim,the magician, gives with some deftly done old tricks and several amazing new ones. Mei Lings, dance team; the Wong Sisters, dancers, plus a line of beautiful Chinese girls, round out a show notable for grace and charm, Mickey Albert and his orchestra play for the dancing and also Mickey m. c.’s the show. Nin [sic] and his rhumba band alternate.

The Billboard
April 15, 1944
Glass Hat, New York
With spot after spot vying to take the sting out of the 30 per cent bite, the Glass Hat’s bid for the available trade was made Tuesday night (4) with Caprice Chinois, an all-Chinese show. Measured by ordinary standards show is strictly run-of-the-mill stuff. The all-Chinese cast helps lift it out of the mediocre class.

The line (6) boasts some cute gals. Two, each a skyscraper, glide around in the conventional manner. Line costumes draw hand, particularly in last number where phosphorescent touches are used. Line’s in-step stuff, however, is poor.

Canary of the production is Kathryn Lee Chang, who does a schmaltzy You Can’t Say No to a Soldier and I Said No. Latter item winds up in a production number where even the thrush joins in the terp sutff [sic].

The Mei Lings do a good ballroom stanza with a Far East twist which loses itself in a jitterbug bit.

Peter Chan, ex-Hellzapoppin, carries the comic and male singing chores. Not so good on the first; excellent on the last. His Irish Eyes, out of a Chinese, may sound like a corny idea, but his voice is good.

One of the best things of the current show is Mickey Alpert’s show-cutting and dance arrangements. On the vocals Mickey’s voice isn’t any show-stopper, tho competent. Grace Reilly, back with Alpert, does better than okay in the song-delivery department.

Evening Recorder
(New York)
April 22, 1944
Lights of New York
Gadabout Notes: To the Belmont Plaza’s Glass Hat for the opening of the new Spring revue, “Caprice Chinois," which is something decidedly out of the ordinary in night club entertainment All performers are Orientals, yet the costumes, songs and dances are strictly Occidental. Peter Chan gives original humorous interpretations of ditties of the day. Kim, a magician, has mystifying tricks and comic chatter. The Wong Sisters are graceful and accomplished dancers. Kathryn Lee Chang sings charmingly. The Mei Lings are a pleasing dance team, and the chorus is a bevy of Chinese beauties, some of whom come from as far away as San Francisco. The show, which is Frank Law’s idea, was voted an unqualified success by first-night spectators. Music for the show and dancing is supplied by Mickey Alpert, who acts as master of ceremonies, and his orchestra, Nino and his rhumba band also play for dancing.

High spot is the performance of Peter Chan, recent singing star of “Hellzapoppin’”. A baritone, Chan wins applause with “When Irish Eyes Are Smiling,” with a real Irish brogue.

Another modest budgeter sans dynamic b.o. lure for the marquee, though entertaining all the way. Show is set in regulation vaude groove with Ruby Zwerling’s tooters in the pit rather than on stage as has been customary.

…Peter Chan, Chinese baritone with “Caprice Chinois,” was showstopper this show with songs and comedy. “Caprice” revue has been abbreviated since closing at the Glass Hat, N.Y. Pruning has not lessened it entertainment value; if anything, it enhances it. Aside from Chan, revue has the Mei Lings, nifty ballroomologists; Kim, clever magician; Wong Sisters, neat steppers, and Kathryn Lee Chang, an Oriental Ethel Merman who strikes pay dirt with “You Can’t Say No to a Soldier” and “Something for the Boys.”…

The Billboard
July 1, 1944
KIM is a feature of Caprice Chinois, all-Chinese revue which opens Wednesday (28) at the Lookout House, Covington, Ky.

Courier-Journal
(Louisville, Kentucky)
July 9, 1944
p33: National
An a-star Chinese revue will be presented as the main stage attraction beginning Friday. It is “The Chinese Follies,” features of which will be the line of girls and Peter Chan, formerly with “Hellzapoppin”.

Courier-Journal
(Louisville, Kentucky)
July 13, 1944
The Chinese Follies On National Stage Friday
The National will wait until Friday to change its program offering on the stage, “The Chinese Follies,” which is heralded as an “all-star” attraction. Among the entertainers, including a chorus of Chinese girls, are Peter Chan, formerly with “Hellzapoppin’;” Kim, a magician; Mei Lings, a dance team; Kathryn Lee Chang, singer, and The Wong Sisters, dancers. The screen attraction accompanying this stage revue will be “The Mystery of the 13th Guest” with Helen Parrish, Dick Purcell and Tim Ryan.

Courier-Journal
(Louisville, Kentucky)
July 15, 1944
Clever, These Chinese, And Quite Entertaining
The adage, “clever these Chinese,” never was better demonstrated than yesterday afternoon when the National introduced its “Chinese Follies” to a Louisville audience. A tiny and intimate revue, “Chinese Follies” is but a bit of vaudeville with Oriental trimmings, many of which seem to have been Americanized through several generations. Chief entertainer is Peter Chan, whose high voice is very strong and accurate in good imitation of an Irish tenor. He is also master of ceremonies, and while his comedy is not always in the best of taste it is not too low for vaudeville consumption. He plays the accordion nicely and while he admits any resemblance in his playing to Phil Baker’s performance is purely “Occidental,” we are disposed to give him the palm, for we can at least recognize the tunes he plays. We haven’t always been able to do this with Baker until he gets thoroughly warmed up.

An artful magician, named Kim, also is on the bill and he proves again that the hand is quicker than the eye. Chan, in comment, says that is why so many black eyes are seen. Kim is right quick with his hands, using, of course, a lot of those manufactured tricks which magicians contrive to make illusions harder to solve. Kathryn Lee Chang is the songstress, with her contralto almost of a soprano pitch. She sings three songs of different styles, sentiments and general variety showing her several moods. She seems best, though, in the lively air. The dance team billed as Mei Lings is very smart and capable and the Wong Sisters are pretty little tricks who also dance well. Two statuesque show girls and two about the sire of figurines serve chiefly as decorations, assuming polite and restful poses. The two little girls join the Wong Sisters in the chorus work. While not essentially Chinese theater, “Chinese Follies” is quite a pleasant divertisement if vaudeville pleases you. With this revue the National is offering “The Mystery of the Thirteenth Guest,”...

…Horace Hiedt also drew plenty at the Oriental (3,200), the house hitting a good $34,000 for the week. New show, headlining Ted Flo Rito and Caprice Chinois, all-Chinese revue, opened slow, but picked up during the second show. Should hit around $29,000 for the week.

I believe Forbidden City dancer, Jack Mei Ling, was half of the Mei Lings. Kim the magician was Korean. After the Caprice Chinois/Chinese Revue/Chinese Follies tour ended, Kathryn Lee Chang and Peter Chan performed separately in New York City. The New York Sun, January 16, 1945, said Kathryn was at the Commodore Theater and Peter at the Franklin Theater.

(Next post on Friday: Anna May Wong in Life)
Posted by Alex Jay at 8:00 AM