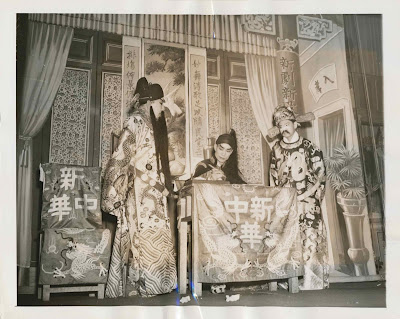 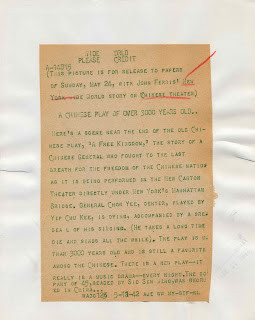 (This picture is for release to papers of Sunday, May 24, with John Ferris’ New York Wide World story on Chinese Theater)

A Chinese Play of Over 3000 Years Old

Here’s a scene near the end of the old Chinese play, “A Free Kingdom,” the story of a Chinese general who fought to the last breath for the freedom of the Chinese nation as it is being performed in the New Canton Theater directly under New York’s Manhattan Bridge. General Chow Yee, center, played by Yip Chu Kee, is dying, accompanied by a great deal of his singing. (He takes a long time to die and sings all the while). The play is more than 3000 years old and is still a favorite among the Chinese. There is a new play—it really is a music drama—every night. The company of 45, headed by Sio Sin Wing, was recruited in China...WABC May 12, 1942