“Fighting China” at the Museum of Modern Art, 1942 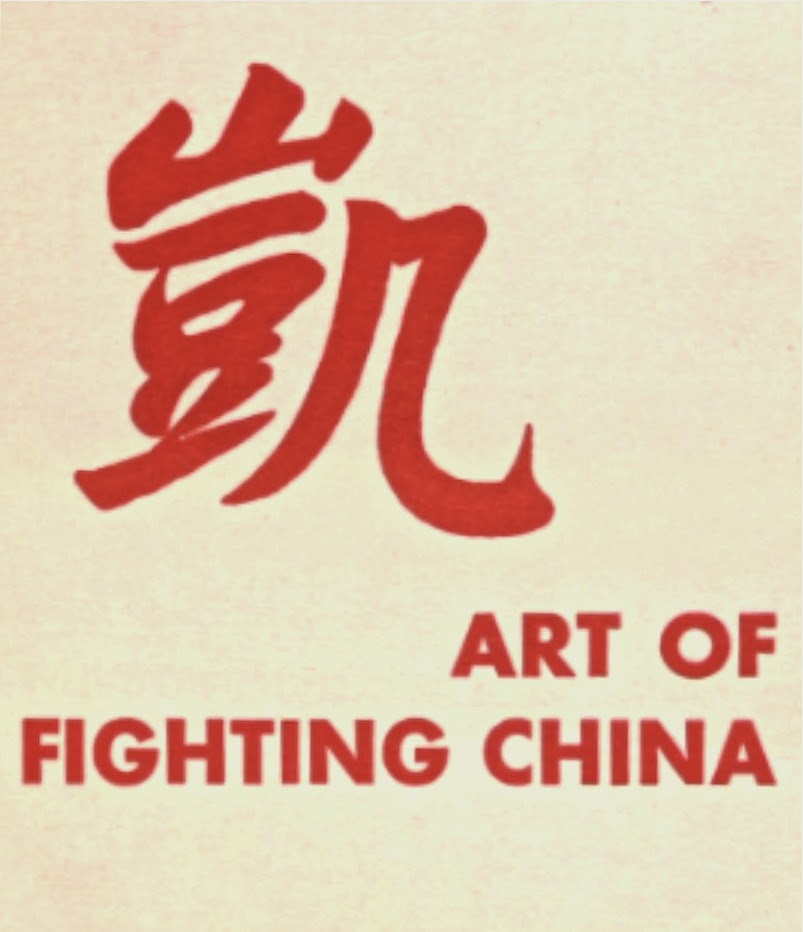 The New York Sun
November 6, 1942
“To Show Chinese Art”
A collection of paintings, drawings and wood cuts brought from China by Wendell L. Willkie will be placed on exhibition next Wednesday at the Museum of Modern Art, 11 West 53d street.

The collection was intrusted [sic] to Mr. Willkie by the All China Fine Arts Association, an agency of the Chinese Government in Chungking, and was delivered by him to United China Relief.

They will remain on view here until Thanksgiving, and then will go on tour. 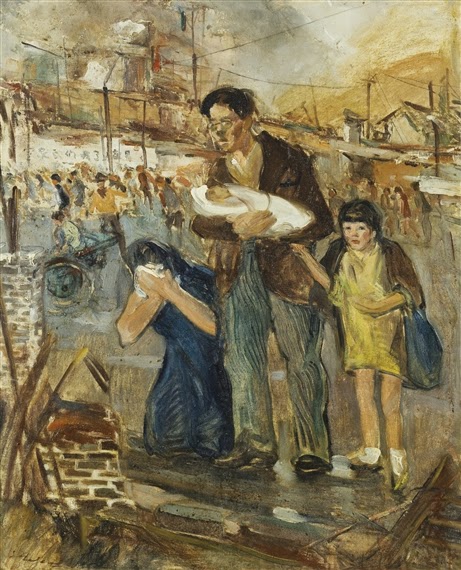 New York World-Telegram
November 1942
The dramatic circumstances of its transportation to this country are alone enough to make the exhibition called Fighting China, newly opened at the Museum of Modern Art, an exciting and memorable affair. Wendell Willkie brought the pictures back from China when he returned to this country from his round-the-world trip a few weeks ago. Executed by contemporary artists portraying the war in their native country, they were wrapped in a 50-pound package and entrusted to Mr. Willkie by the All-China Fine Arts Assn., which is a branch of the Central Political Institute in China. They’re being shown here in collaboration with United China Relief.

Some of the pictures—they’re all by artists with names unfamiliar to the American public—are executed in typical Western style, and exciting in the fashion you’d expect, considering the battles and bombings which are their subject. But most interesting of all, I think, are those executed in the traditional technique of China, the Chinese artists used to paint birds, bees and flowers. Here are the same flattened planes and simplified designs, the same soft tones and stylized construction. But the subjects are episodes in the heroic struggle of China and her people. And if anything, the traditional treatment has made them more poignantly expressive.

New York Sun
November 13, 1942
When Mr. Willkie made his recent memorable trip to China he brought back with him some paintings and prints of the war by contemporary Chinese artists and these works are now shown at the Museum of Modern Art. What will astonish most observers in them, I believe, is the fact that these Oriental artists have the same approach that our men have. There is no difficulty in understanding the Chinese language that these artists use. It is almost our own idiom and the mere fact that some of the pictures are mounted on rolls, in the ancient way, does not stand between us. Even the Chinese dress of the refugees in these terrible records no longer seems foreign to us. Apparently the whole world is quickly approximating to one standard.

One of the simplest and most effective of these paintings is the “Waiting for the Train in the Battle Front of Southern Kwansi,” by Liang Chung-Ming; but, also, it is impossible to look unmoved upon the “Chungking in Flames” by Wu Tso-Jen and the “Guerrillas” by Lui I-Szu.

Schenectady Gazette
(New York)
November 27, 1942
“Fighting China—Theme of Modern Art Exhibit”
Battles, bombed cities, civilians fleeing from their homes, and other scenes from the Chinese theater of war are on exhibition at the Museum of Modern Art in New York city. The exhibition is being held in connection with the United China Relief. These realistic paintings, brought back from China by Wendell Willkie, will be sent on a tour of the country after Thanksgiving day. 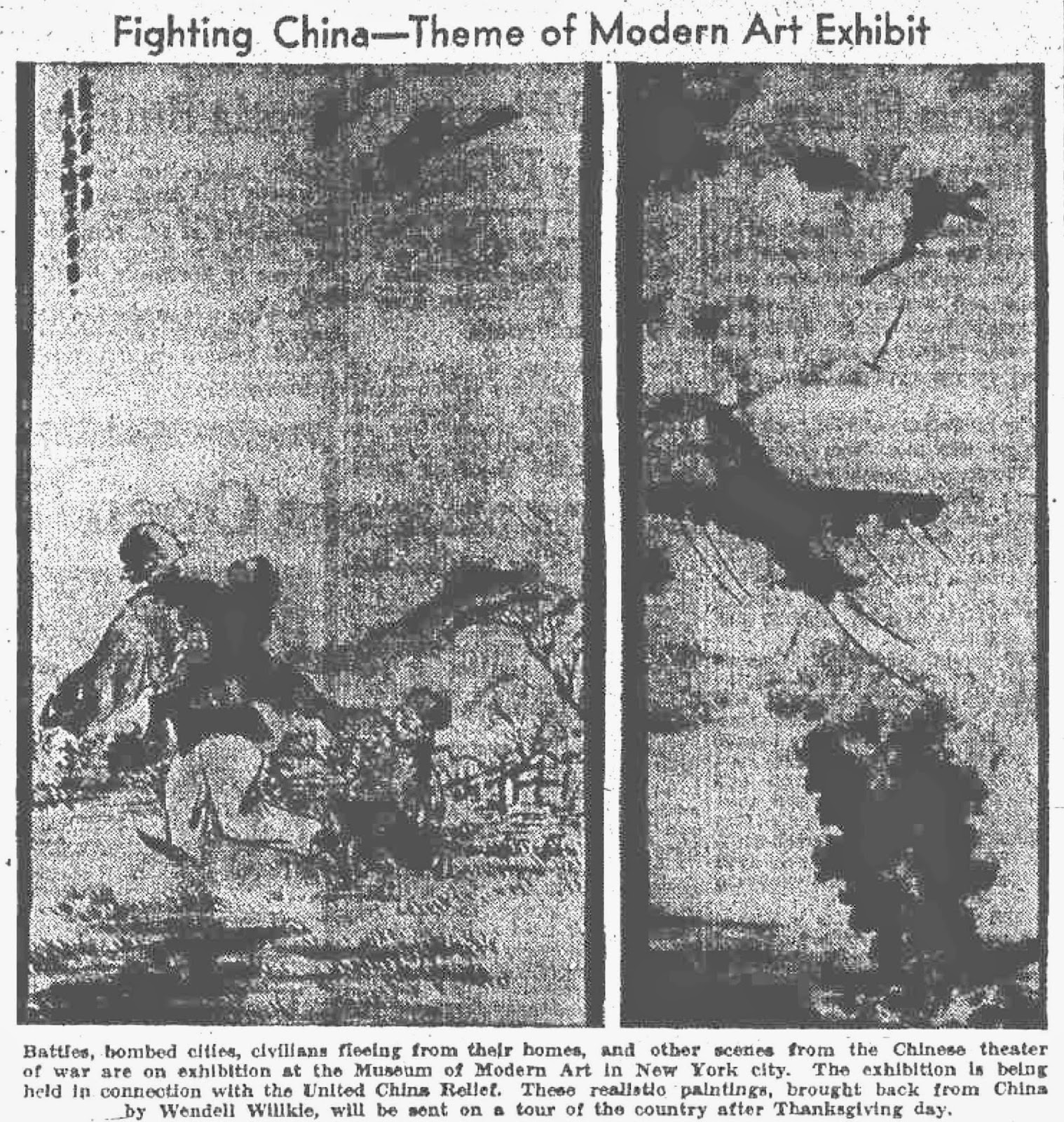 The Post-Star
(Glens Fall, New York)
December 1, 1942
“Willkie Attends Art Exhibit”
Admiring a watercolor painting on exhibit at the Museum of Modern Art in New York City are (l. to r.) Mme. Soong, wife of Dr. T.V. Soong, Chinese minister of foreign affairs, Wendell Willkie, and Maj. Gen. Chu Shih-Ming, Chinese military attache in Washington. The painting, which honors the Flying Tigers, is one of a group executed by Chinese artists which were brought to the U.S. by Willkie after his flying trip around the world. 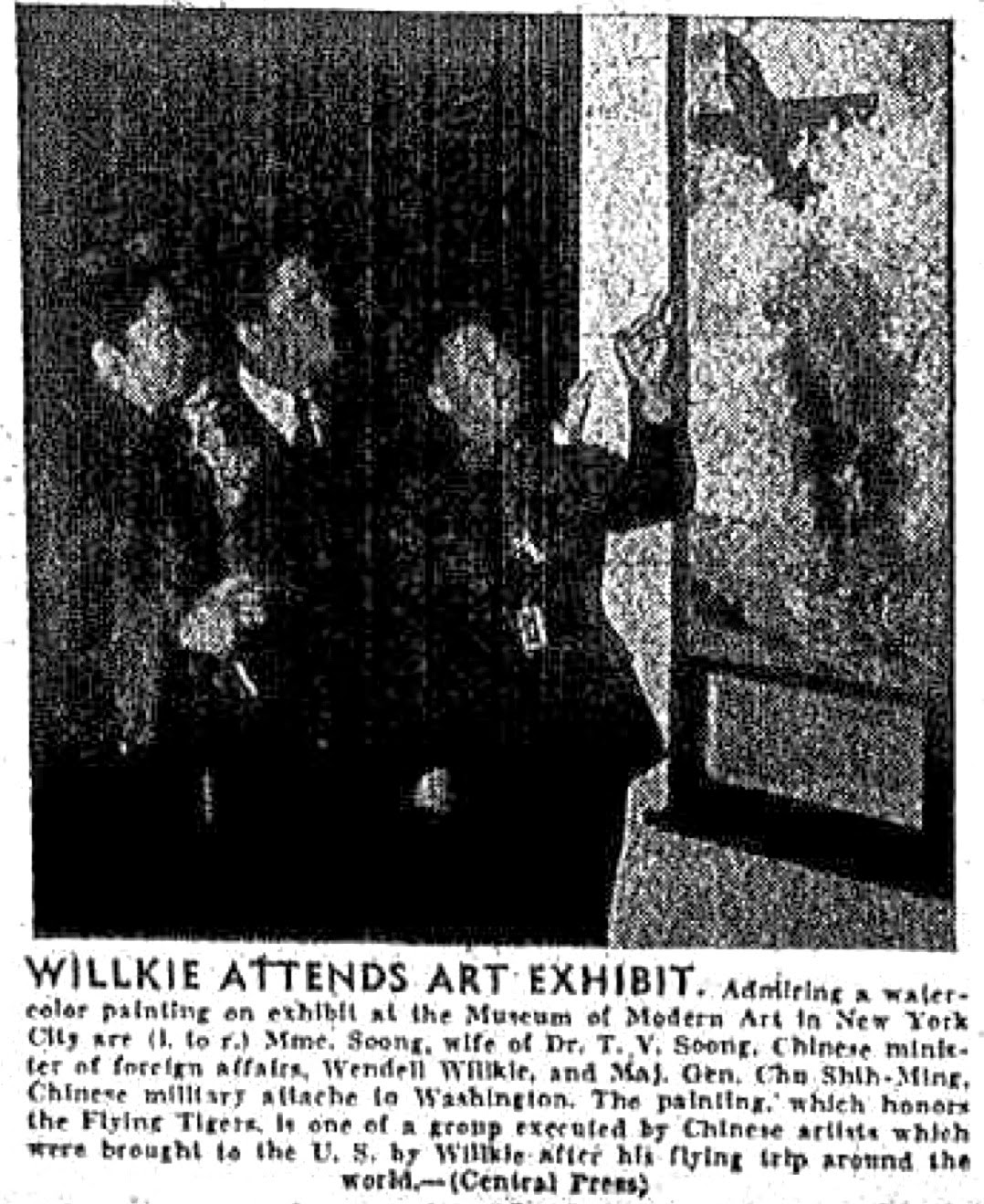 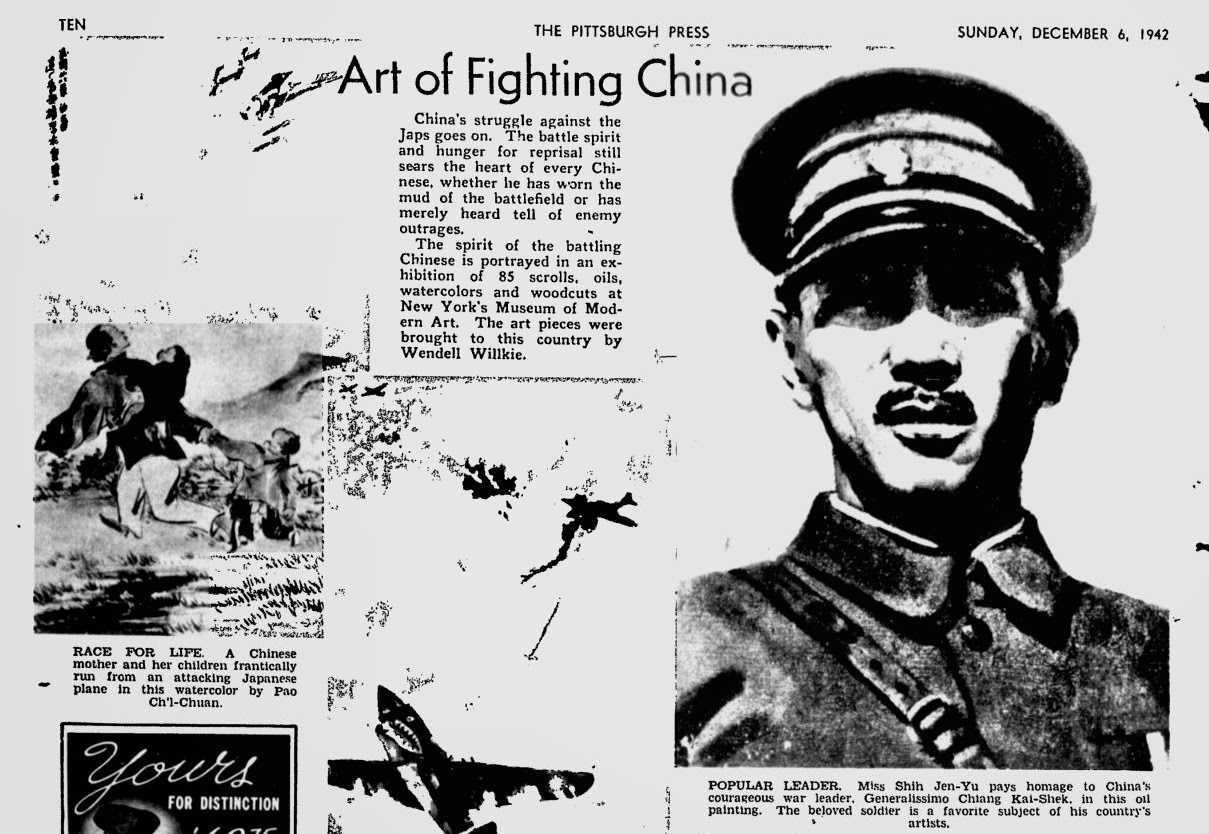 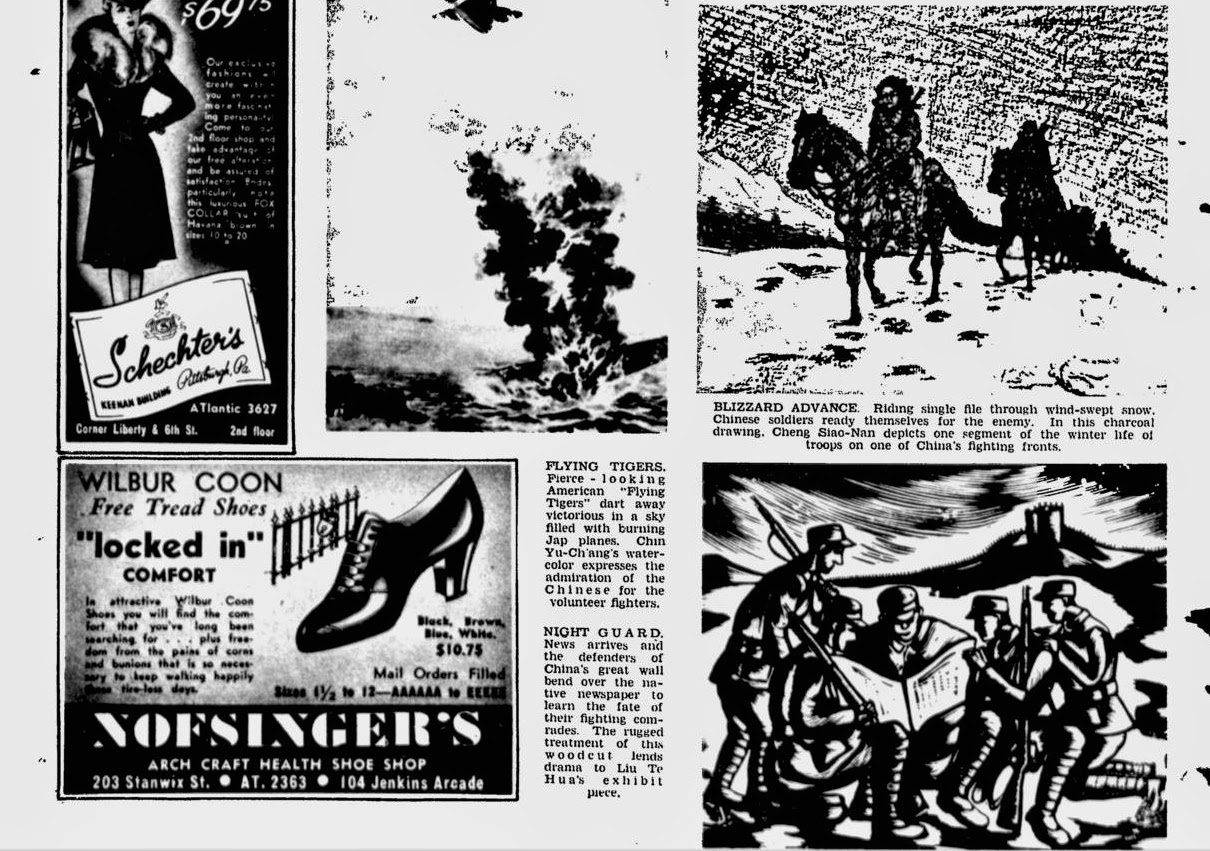 China at War
Volumes 8-9, 1942
“Art of Fighting China”
Battle Scene.
This and the following woodcuts by Liu Te-hua are a part of the art works that were sent by the All China Arts Association to United China Relief through the kindness of Wendell L. Willkie and that will be a part of a travelling exhibit sponsored by the Museum of Modern Art, New York.
Above: Camel Brigade
Left: War Bulletins

Asia and the Americas
January 1943
The tragedies and valor of war-time China are being portrayed in drawings, water-colors and woodcuts by many Chinese artists. A collection of these, brought to United China Relief by Wendell Willkie for the All China Fine Arts Association when he flew home from Chungking, was first shown at the Museum of Modern Art, New York, and is now touring the United States.

Boston Herald
(Massachusetts)
February 7, 1943
“Chinese Paintings Brought by Willkie to Be Seen Here”
Bostonians will have the privilege of seeing the notable exhibition of paintings and graphic art by artists in fighting China, which Wendell Willkie recently brought back from Chungking at the request of Mme. Chiang Kai-shek. The collection will be on view at the China Center, 367 Boylston street, for two weeks from Wednesday, Feb. 17, to March 2. The hours are from 9 to 5 daily and 9 to 12:30 Saturdays.

Mrs. Richard B. Hobart of Brookline is chairman of the Center’s education committee, which is bringing the collection to Boston. First seen in New York last November at the Museum of Modern Art there, by which it was organized, it is now that museum’s traveling exhibit of about 100 pictures, including water colors, pastel drawings, wood blocks and a few oil paintings vividly portraying scenes of everyday life in China and some relating to recent events in the war.

The pictures were entrusted to Mr. Willkie during his world tour by the All China Fine Arts Association, a branch of the Political Institute in Chungking, of which Generalissimo Chiang Kai-shek is director. They were selected by Dr. Chang Tao-fan, dean of the institute and a director of the Fine Arts Association, and flown to the United States by an emissary on the trip.

The China Center is participating in the Greater Boston United War Fund Campaign from which it will benefit. Mrs. Arthur W. Hartt is president of the Chinese American Women’s Division of the United China Relief, Inc.

San Francisco Chronicle
(California)
June 20, 1943
Under the title “Art of Fighting China” the M. H. de Young Memorial Museum, is showing a group of paintings, drawings and block prints presented by the government of Chiang Kai-shek to Wendell Willkie when Willkie was in Chungking. This is particularly interesting in the scrolls and other ink-and-wash wherein the ancient Chinese manner is well adapted to the purposes of a harsh and heroic realism. It is also interesting in its woodcuts, which strongly reflect the contemporary Russian style of book illustration.

Richmond Times Dispatch
(Virginia)
September 14, 1943
“Chinese to Speak Here at Museum”
Professor Yueh-lin Chin, Chinese philosopher and newly appointed member of the department of philosophy at Harvard University, will speak tomorrow at the Valentine Museum, at the preview of an art exhibit flown from China by Wendell Willkie.

Traveling in America under the auspices of the State Department, Professor Yueh-lin Chin left Chungking on June 5. He left Peiping during the war and went south to Kunming, through French Indo-China just before the closing of that border.

A former teacher at Ching-hua University in Peiping and at the National Southwest Associated University, he studied here and at Cambridge University in England.

His museum speech will be heard at 8:30 P.M., and its theme will be “The Art of Fighting China.” Invitations to the preview have been issued to a special group of guests, but thereafter the exhibit will be open to the public.

All pictures are the work of contemporary Chinese artists and were entrusted to Mr. Willkie by the All-China Fine Arts Association. This group is a branch of the Central Political Institute in Chungking. They are to be shown here under the joint sponsorship of United China Relief, the Richmond War Community Fund, and the Valentine Museum.

The Philadelphia Inquirer
(Pennsylvania)
October 1, 1943
Willkie’s Chinese Art to Be Sold at Exhibition
Outstanding in importance among the events arranged in the interest of the war effort is the special exhibition of paintings by native Chinese, to be held at the headquarters of the United China Relief, 1812 Chestnut st., starting Oct. 11. The pictures, which were brought to this country by Wendell Willkie, when he returned from his epoch-making trip, depict the part that women are playing in winning the war for China.

After having been shown in 16 cities, the pictures will be offered for sale this time, the proceeds going to the individual artists. Mr. Willkie was able to bring the illustrations back with him, because of the co-operation of the various Governmental agencies which felt that this would be a way of accelerating the war effort.

Illinois State Journal
(Springfield, Illinois)
December 12, 1943
“State Museum Exhibits Art of ‘Fighting Chinese’”
“The Art of Fighting China,” one of the outstanding exhibits of the year in the Illinois state museum’s art gallery, opened yesterday and will remain on display in the north gallery until Jan. 1.

The collection of oils, water colors, scrolls, pastels, wood cuts and charcoal pictures by contemporary Chinese artists, is loaned by the Museum of Modern Art in New York. The material was brought to this country last year by Wendell Willkie, and now for sale for the benefit of the United China Relief.

It is an unusual show in that the subject matter largely draws upon the war for inspiration. A series of pastels vividly shows the battle of Changsha; there are water colors and oil paintings of the bombing of Chungking; other scenes show refugees, guerrillas, reconstruction, and there are portraits. Among the latter are two outstanding paintings. One is an oil portrait of General Chiang Kai-shek against the blue sky of China, and the other is a life like pastel of General Hseh-Yo, the victor of Changsha.

The Knickerbocker News
(Albany, New York)
December 30, 1943
Willkie Endorses Chinese Art Show
Better understanding of the Chinese and their culture is “of major importance today,” Wendell L. Willkie wrote in a note expressing his interest in the art exhibition the United China Relief Committee has arranged for the Albany Institute of History and Art, beginning next week.

Regretting inability to rearrange his schedule so he could attend the preview reception Wednesday night, Mr. Willkie said in a letter to John D. Hatch Jr., UCR chairman for Northern New York:

“I should very much like to be with you, not alone because of personal enjoyment which I would, have from seeing these paintings, but also because I believe that the exhibition will be most helpful in bringing about a better understanding of the Chinese and their culture. Today, more than ever, that is of major importance.”

(Next post: Pardee Lowe’s Father and Glorious Descendant)
Posted by Alex Jay at 8:00 AM