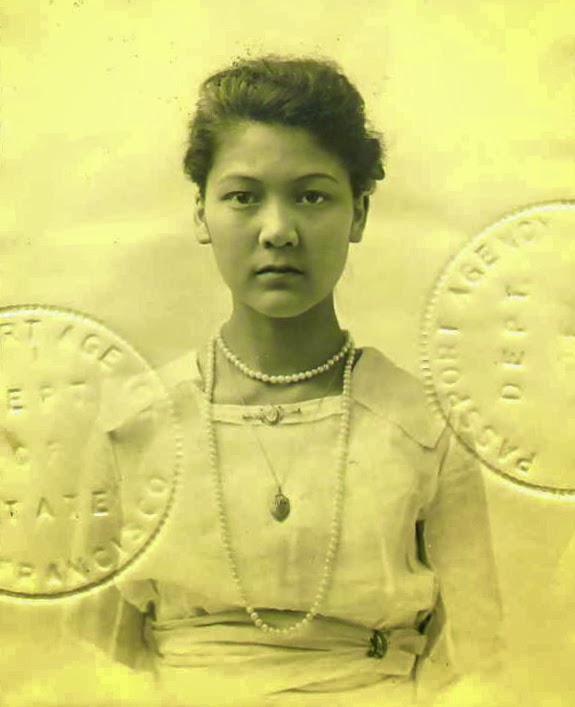 Eva Fong Chan was born in Sacramento, California on April 1, 1897, according to Asian American Art: A History, 1850-1970 (Stanford University Press, 2008). The same birth date was found at the California Death Index and Social Security Death Index at Ancestry.com. However, a passport application, dated November 6, 1918, had a March 31, 1897 birth date, and a registration application filed with the Consulate General of the United States at Hong Kong also had the March 31 date.

In the 1900 U.S. Federal Census, Eva was the second of three children born to Ah Jung Sing and May. Her father was born May 1863 in China and emigrated in 1882. Her mother was born July 1874 in Idaho; Asian American Art said Chan’s mother “...may have been a Shoshone Native American.” The Shoshone lived in Idaho among other states. Chan’s siblings were Pauline, age 4, and Edmund, four months. The Sing family lived in Sacramento at “917 Fifth Street & J St.” Eva’s father’s trade was “Chinese printer.”

Asian American Art said the family moved to San Francisco around 1901. After the great fire and earthquake of 1906, the family relocated temporarily to nearby Emeryville. From there they settled in Oakland from about 1906 to about 1916.

The 1910 census recorded the “Fong” family in Oakland at 670 37th Street. Chan was the second of six children. Her parents had been married 15 years. Her father, “Sing Fong”, spoke English and was a hotel manager. Asian American Art said Chan “…attended high school and won an art competition, which led to her design being produced on Christmas cards. Chan is also noted at this time for being the Bay Area’s first Miss Chinatown, and she received as a prize a piano, which she taught herself to play…” After Chan graduated from high school her family returned to Sacramento, where she attended junior college. After a short time, she left school to help her mother.

According to Asian American Art, Chan decided to join childhood friend and Chinese native, Bo Kay Chan, on his business trip to China. He was a Section 6 merchant as defined by the Chinese Exclusion Act. On her 1918 passport application was the name “Eva Fong Sing” and it said the purpose of her visit was “to become teacher in Congregational Mission, Canton, and to pursue studies in Chinese, to fulfill plans which have long been in preparation.” Her occupation was teacher. She was to travel aboard the S.S. Nanking on November 30, 1918, from San Francisco. 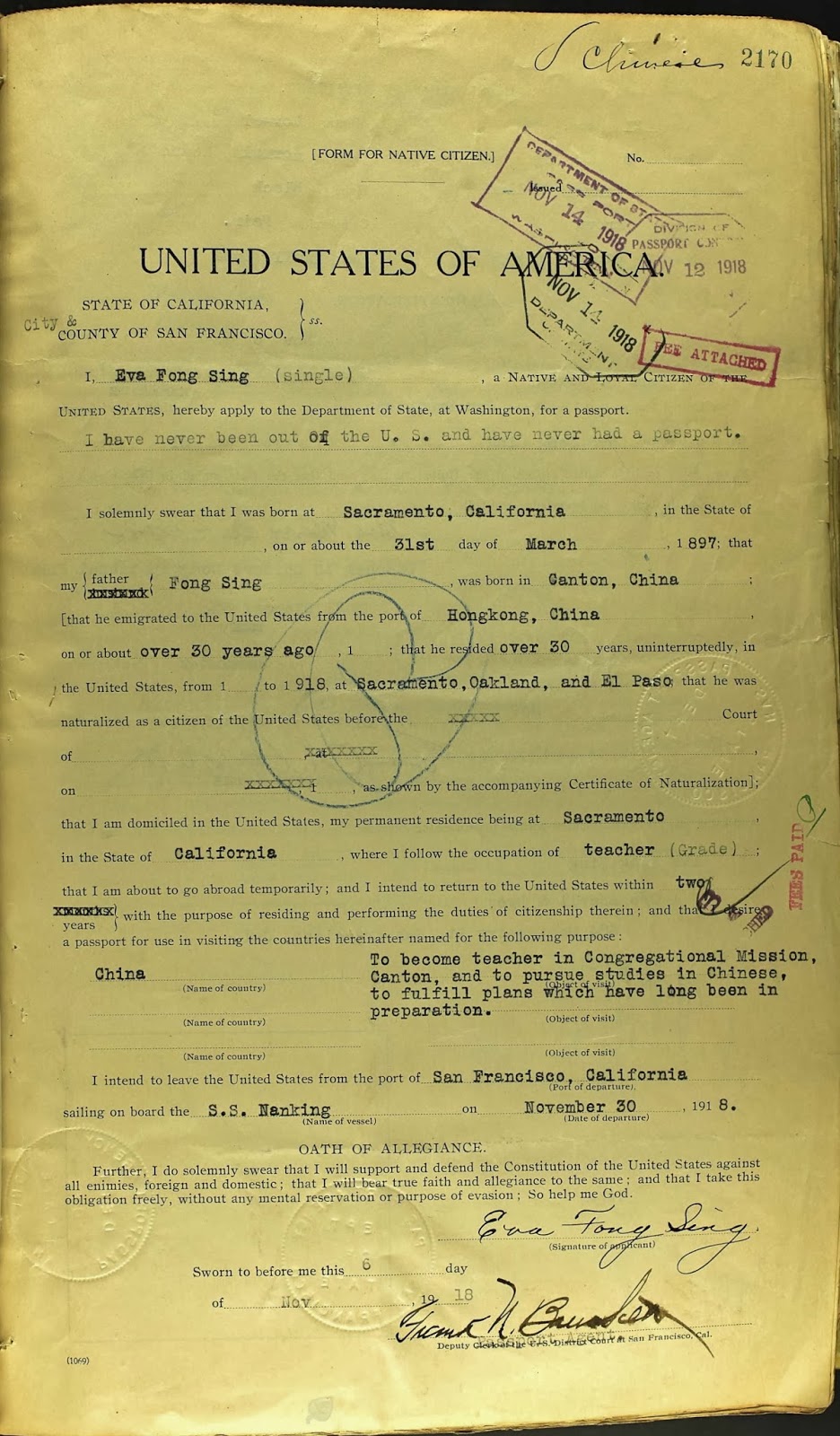 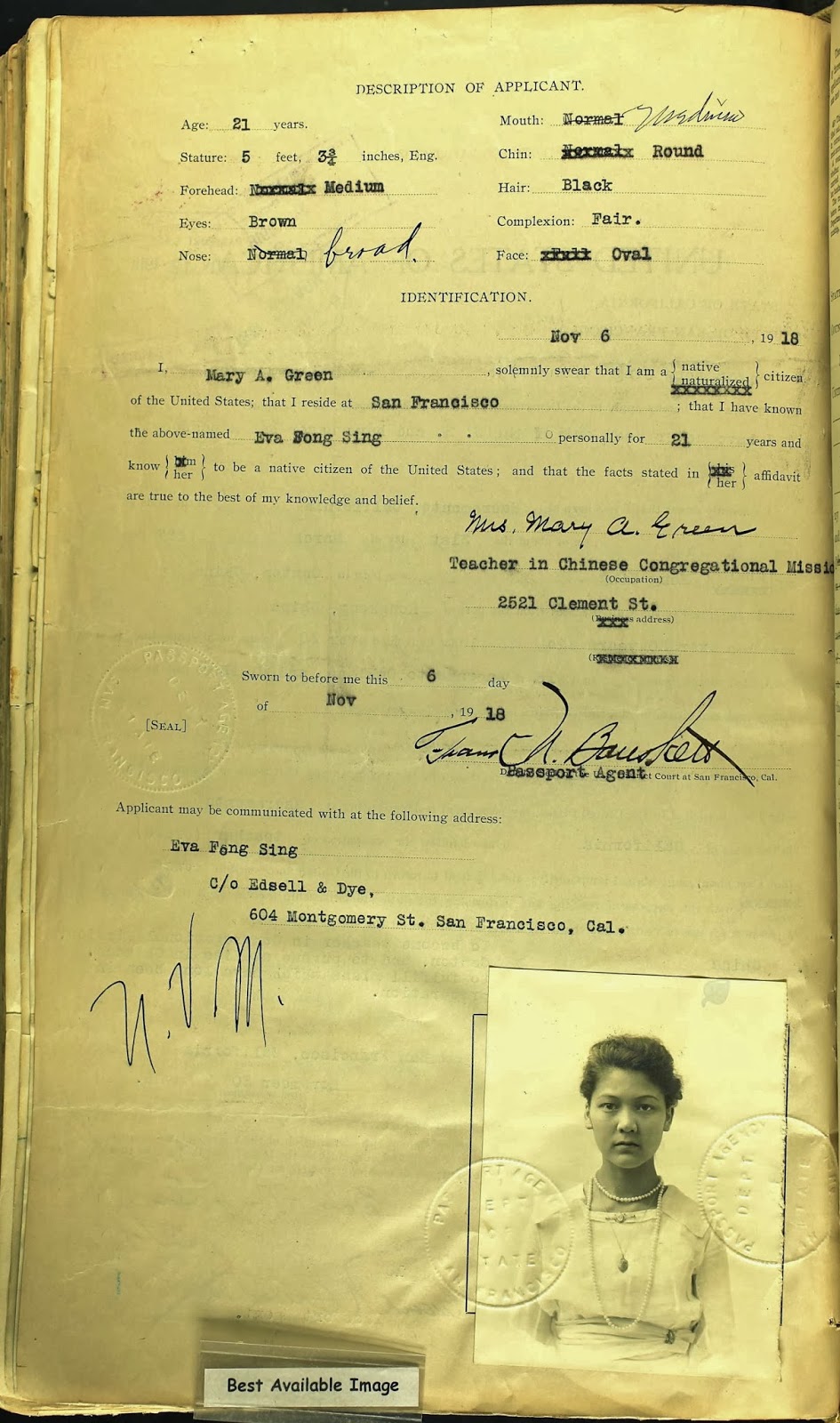 However, she did not leave until December 5, 1918, according to her 1919 Application for Registration at the Consulate General of the U.S. in Hong Kong. She arrived in Hong Kong, January 10, 1919. Her residence there was 22 Caine Road. She intended to return in two years. 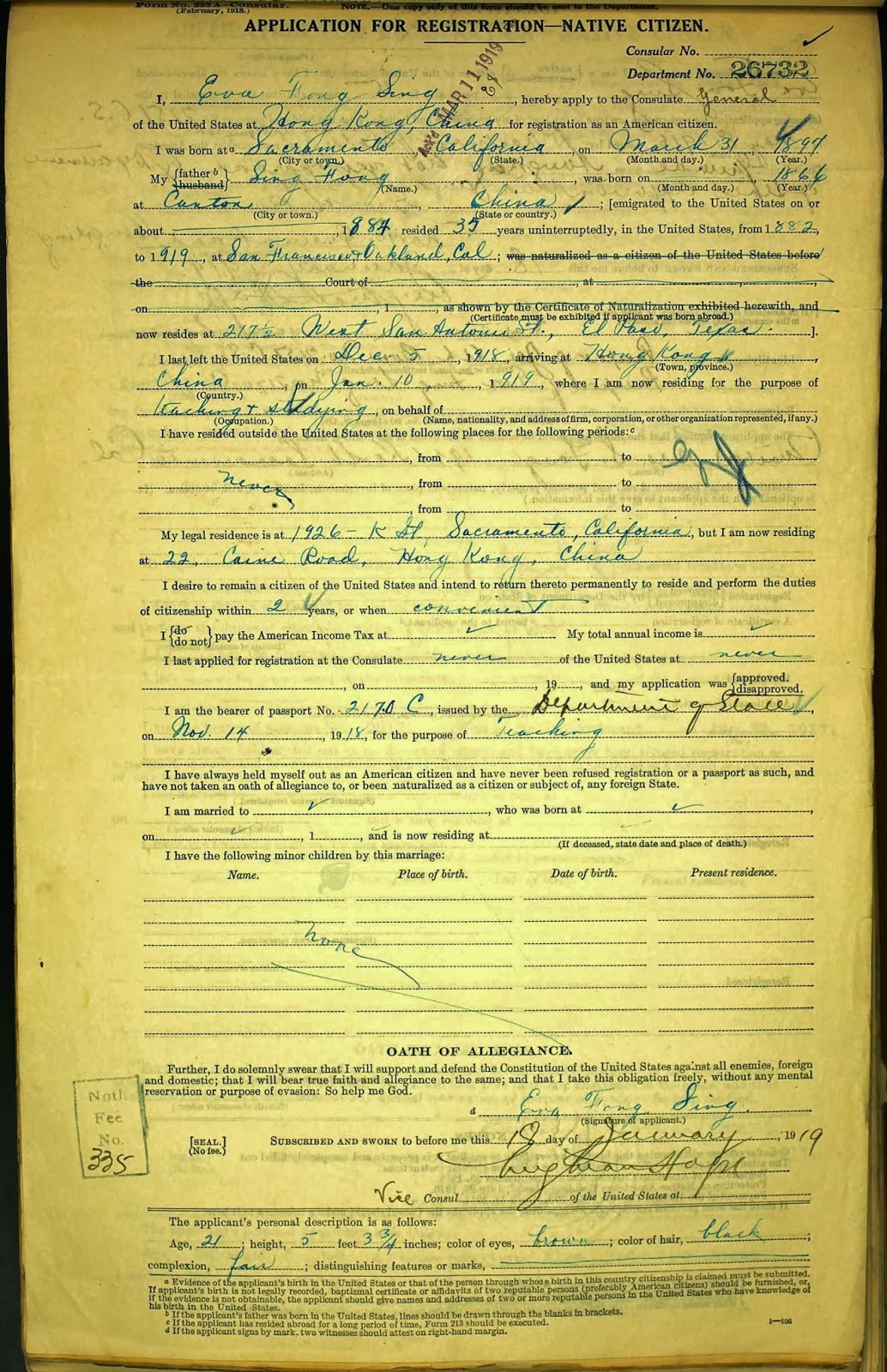 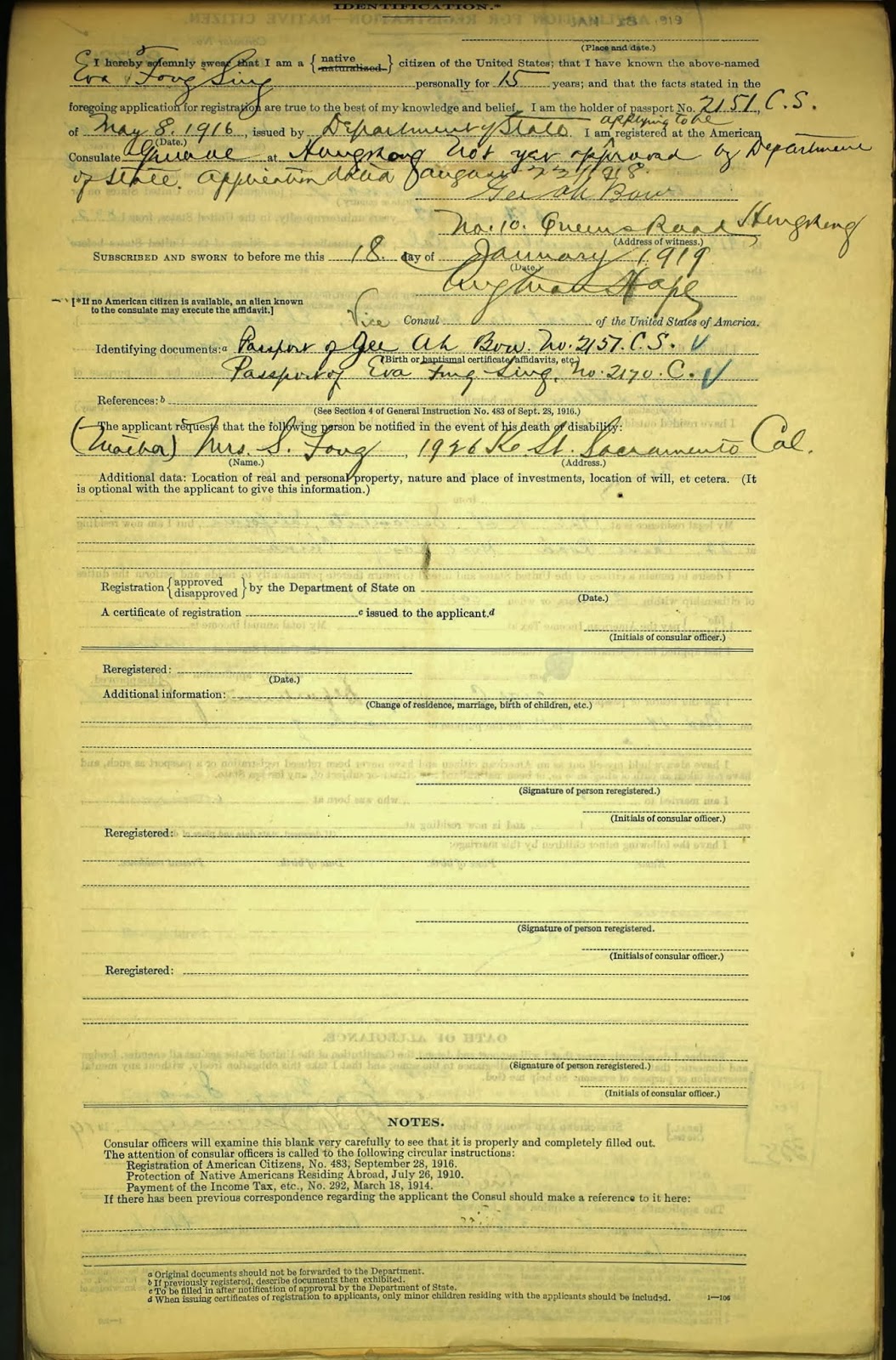 A California passenger list, at Ancestry.com, recorded Chan’s name as “Eva Fong Sing” and her arrival in San Francisco was October 7, 1925. She had sailed aboard the S.S. President Cleveland from Shanghai. Asian American Art said she married Bo Kay Chan in Canton where she “…studied piano and possibly art during the six and a half years she lived in Guangzhou and Shanghai….”

The 1930 census recorded Chan and her husband in San Francisco at 866 Jackson Street. His status was alien, who emigrated 1926 and whose occupation was merchant. Asian American Art said they “…lived above the Mandarin Theater….Chan began studying at the California School of Fine Arts. Soon after, she joined the Chinese Revolutionary Artists Club originally founded by Yun Gee…” In 1932 Chan left the California School of Fine Arts to focus her attention at the Arrillaga Music College.

The Chinese Digest, November 29, 1935, reported the upcoming exhibit at the de Young Museum in San Francisco:


On the twenty-second of December a special talk will be given by principal Hong, a collector of note, of the Nam Kue Academy.

In the 1940 census, the couple resided at 1027 Grant Avenue, San Francisco. Chan’s husband was a food importer and exporter. Asian American Art said Chan’s daughter was born in 1940.

Chan’s work was almost included in the Chinese Digest, April–June, July–September 1940 issue, which had S. MacDonald Wright’s article, “Chinese Artists in California.” The editor’s note said lack of space prevented including her and others.

Asian American Art said Chan “…played the organ for the Chinese Congregational Church and maintained a successful career as a piano teacher throughout her life.” Notices of piano recitals by Chan’s students were found in 1980 issues of East West: The Chinese-American News Magazine.

The passing of Chan’s husband was reported in Chinatown News, Volume 20, Issue 2, 1973:

Chan passed away June 26, 1991 in San Francisco, according to the California Death Index and Asian American Art which has a full-color self-portrait accompanying Chan’s biography.