Beatrice Fung Oye was born Beatrice Elaine Moore in Port Huron, Michigan, on January 2, 1921. Her full name was found in the newspaper, The World Herald, and in a Chinese Exclusion Act case file, at the National Archives and Records Administration branch in New York, which also had her birth information.

In the 1930 U.S. Federal Census, she was the oldest of two children born to Louis and Evelyn, both Californians of Chinese descent; her brother was born in California, too. Beatrice’s father was a restaurant waiter. The family resided in Brooklyn, New York, at 343 East 3rd Street.

Beatrice’s singing talent was recognized and heard on the radio. Below is a photo of her from the Brooklyn Daily Eagle, April 21, 1932. 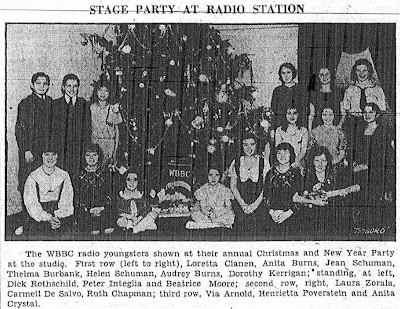 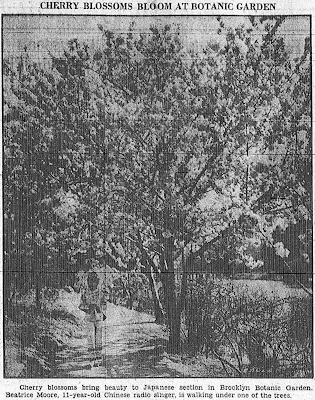 In the 1940 census, Beatrice was the oldest of three children. Her home remained in Brooklyn but at a different address, 861 East 12th Street.

Miss Li Ling-Ai, who planned the entertainment of special programs every Saturday afternoon in the afternoon. During the August “dog days” these hours may be shifted, for the comfort of actors and spectators alike, so watch the Official World’s Fair Program in the newspapers if you plan to attend any performance. On July 13, Miss Fung-Oye, who sang for us at the dedication day ceremonies, was the featured player, with Chin Wan, the juggler, to close the program. On July 20, Miss Li presented her own interpretations of traditional dances and sang Chinese folk songs, and Miss Jean McNally, an  American student of the Chinese theater, gave a dramatic excerpt from the old Chinese play, “Circle of Chalk”. Mr. Donald Somers, announcer for the Fountain Spectacle at the Lagoon of Nations, on July 27th contributed a very spirited “one man” version of the playlet, “The Goose-berry Mandarin”, which we hope he can be persuaded to repeat another afternoon. Prof. Chin, whose spectacular tricks are so popular with visitors that they have become a daily feature, repeated hourly, gave his show on all of these afternoons. 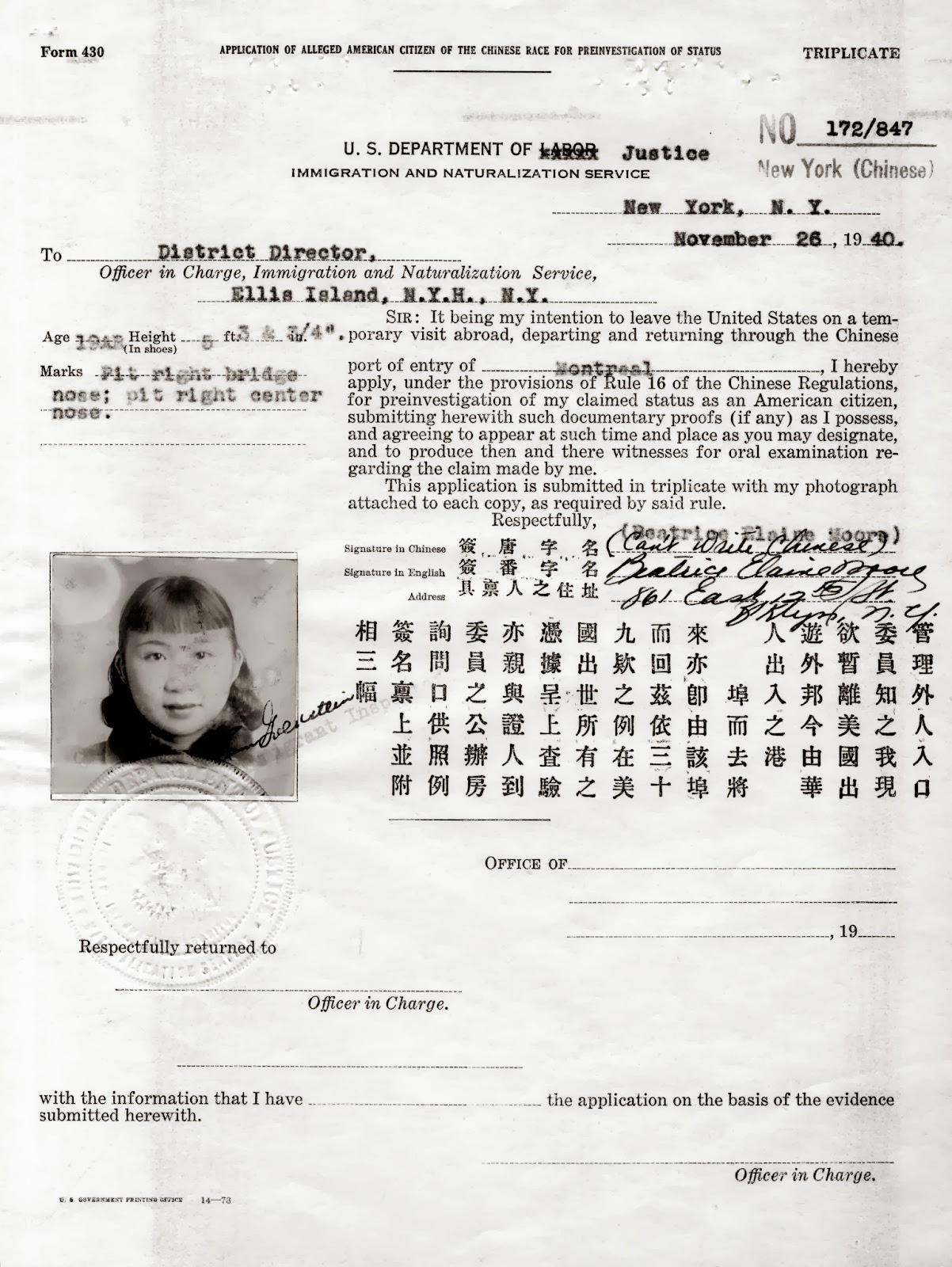 Proud beauty of love is what you’re saying in Chinese when you address Miss Fung Oye, only Oriental blues singer “this side of California.” With her in Albany, while she appeared at the Chinese Relief Festival, was her mother, Mrs. Louis Moore.

When you meet Miss Fung Oye, 18-year-old Chinese blues singer (!), you instantly suppose she can do contralto wonders alongside the exotic tones of an Oriental flute.

But you’re wrong, because she can’t speak Chinese.

The you chance the guess she probably has abandoned her racial talents in the Americanization process.

But you find put she didn’t have any in the first place. She comes from Brooklyn.

In Albany with 30 other Chinese performers from New York to appear in the China Relief Festival in S. Lake, Miss Oye outdid her Lion-dancing dumb bell-tossing, hand-springing countrymen with ease.

Chinese blues singers are rare, Miss Oye insists she’s the only “pure” Chinese giving out with popular strains this side of California.

The Oriental thrush confides timidly that Fung Oye is only her professional name. In private life, she is Miss Beatrice Moore, daughter of Mr. and Mrs. Louis Moore of Brooklyn.

She shies when her mother  accompanies her on her travels, announces:

“Fung Oye is really a pretty name. It means “Proud Beauty of Love.”

Until 1939, Miss Oye never dreamed of being a songstress for anything more than free. She sang “for fun” at Chinese parties, meantime sold 100 sketches to a dress house by way of becoming a commercial artist.

Then George Jessel came in want of a Chinese warbler for his Little Old New York. He couldn’t find one until someone pointed out Miss Moore, who promptly became Miss Oye and a name on Jessel’s payroll.

She has since been televised, appeared in Nw York and Montreal night clubs and auditioned for orchestra jobs. She prefers remaining on her own than singing with a band, however.

“People are constantly telling me I should take Beatrice to Hollywood.” explained Mrs. Moore. “They think she could easily become a second Anna May Wong. But I know she has no dramatic ability—yet.

“We’re going to take our time about that.” said the mother.

Fung Oye, was the first Chinese baby ever born in Port Huron, Mich. When still a child, she was taken to Brooklyn by her parents.

She has had no vocal training. I just liked to sing popular songs.” she said. “I still do. It’s quite a novelty, I guess, to hear a Chinese girl sing ‘Everything Happens to Me’ and ‘I Understand.’

“People came up and tell me my diction is wonderful. Of course, they don’t understand that English is the only language I know. I’m Chinese by blood, but American by nature, I guess.” 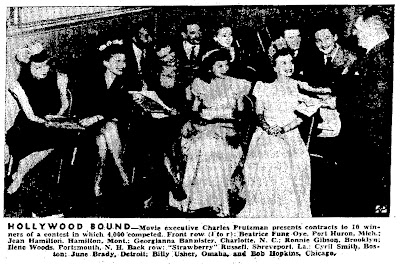 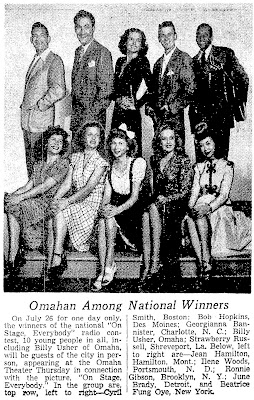 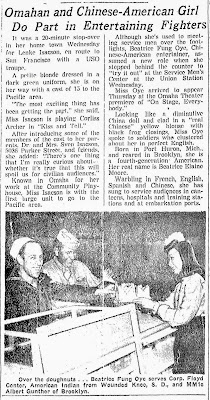 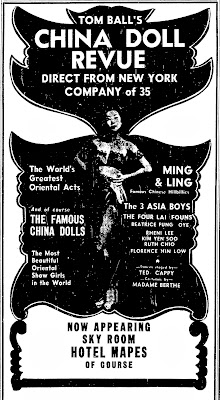 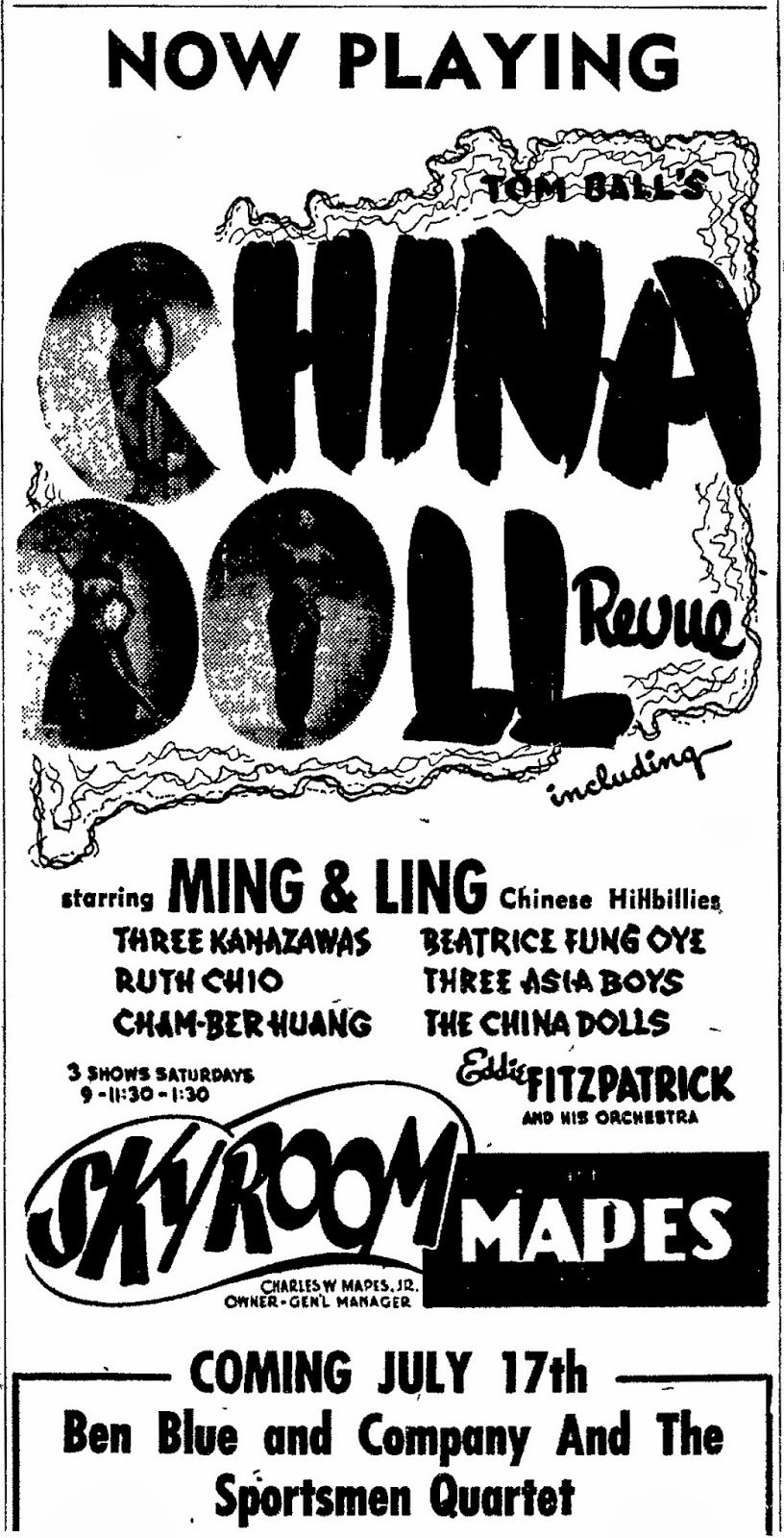 Additional information can be found at Soft Film which has a comment that said Beatrice passed away in the late 1960s of breast cancer.