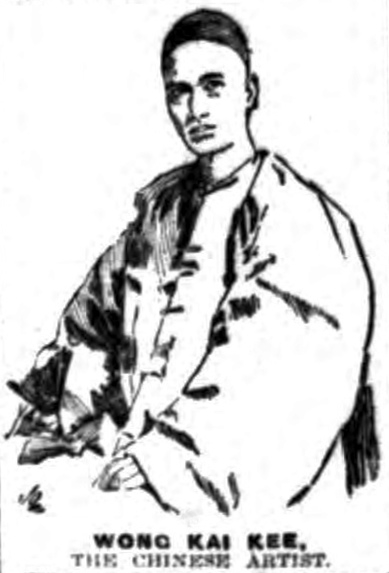 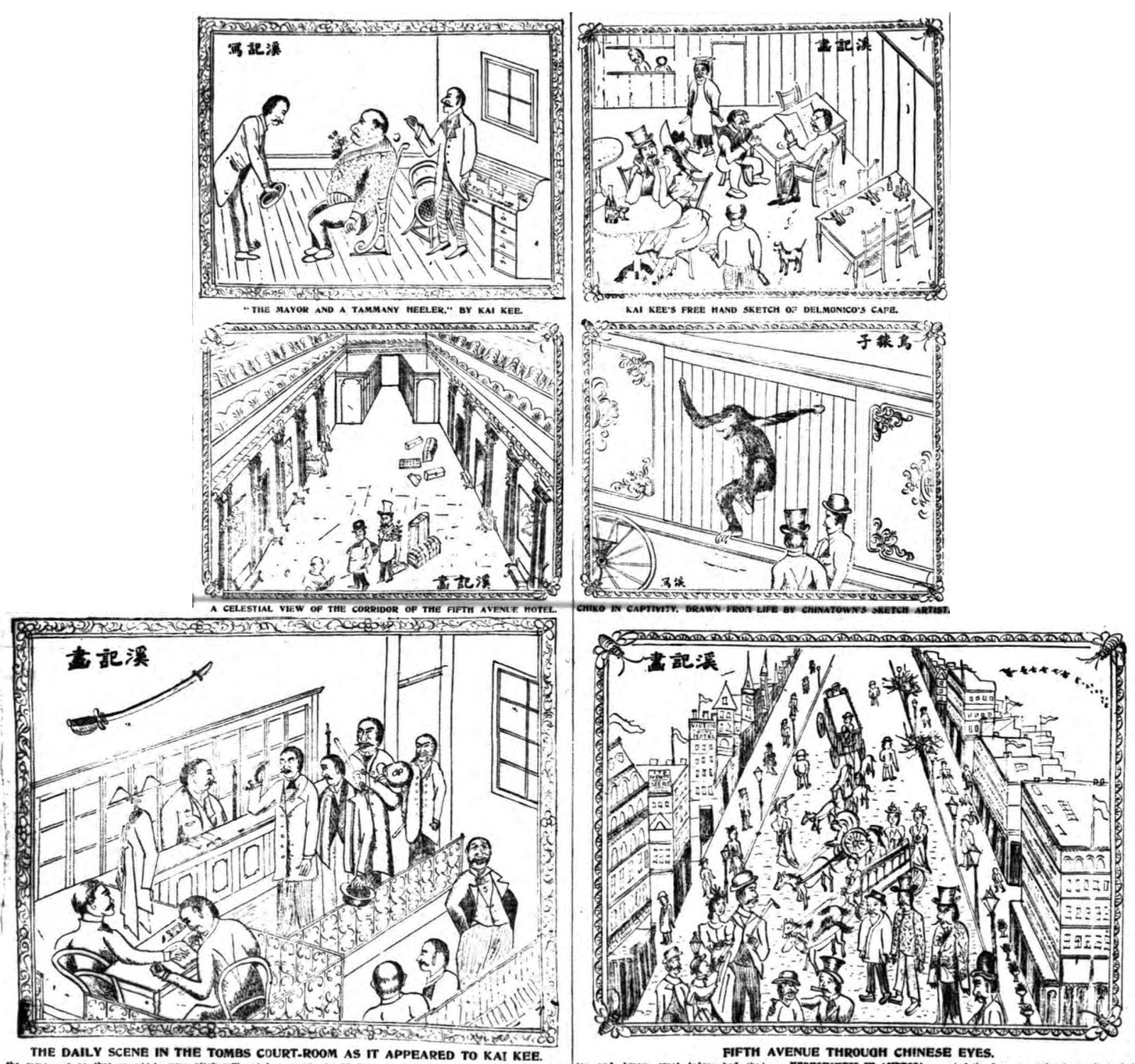 Did You Ever See Funnier Ones?
He Is Not Great in Perspective and Doesn’t Understand Chiaroscuro, but He Is Unique.

Wong Kai Kee—or Kai Kee, as he signs himself in his business—has already made his bow to The World’s readers. They have been told who he is, how he came to this country to oversee the construction of his nation’s buildings at the World’s Fair, how, tired of Chicago and its hubbub, he journeyed eastward and took up his stand and studio in the shadowy  purlieus of Chinatown and hung out—or, rather, pasted out—this gay and flower-bedecked sign to tell everybody of his new departure:
………………………………………………………………..
KAI KEE.
No. 1 Doyers Street.

Wong was a great family in China when Hapsburgs and Hohenzollerns and Howards and Percys and even Crokers and Divvers were bare-legged barbarians. And here is Wong Kai Kee, artist and architect, from China, making sketches from New York life for the New York World, making them with a sharpened bit of a stick upon paper of the same sort as that on which were scratched the pictures of the first Mongolian Emperors.

It would be hard to imagine a more surprised man than was Wong Kai Kee when he was told that The World wanted to employ him as a newspaper illustrator. He was suspicious at first, as a Chinaman always is when any proposition is made to him by a Caucasian. So he took all the other Mongolians into his counsel. They held a powwow right there on the corner, and assured him that to get his pictures into The World would make a regular artistic mandarin of him in America.

That ended it with Kai Kee. He bade good-by to his wife, and with The World man started off uptown, a regularly employed sketch artist. Kai Kee has the eye of an artist for form and color. He was an acute sense of the humorous, too. He sees queer things in faces and costumes, but he has the Chinese bump of conservatism enormously developed. He finds celestial high cheek-bones in men of all nationalities, and to his Eastern vision everybody’s eyes tip up at the corners.

By and by he stopped on a corner and freed his mind on the subject of American conveyances.

“Caree no goot!” he said, pointing to a stiff barouche which a prim coachman was piloting up Broadway. “Jim classy out [illegible] signtee. Heap goot. Go like dlis,” and grasping imaginary thills, one on each side of him, he started off galloping up the street, as only a Chinaman full of pride and memories of his native land can gallop.

The crowd which watched his illustration of the workings of the jinrikisha, a national carriage of China and Japan, waxed gay, and only dispersed when, by The World’s man advice, he ceased.

Grace Church caught his eye. “Ah!” he cried, pointing up at the tall spire. “Good! Plenty good! What you callee?” “That’s a church.” “Chluch? chluch?” he said struggling vainly with the word. “Me no sabee chluch. What you callee chluch?” “Why, a Joss house.”

A glad light overspread Kai Kee’s sallow face. “Oh! heap good Joss house. Thlink me allee samee gon in see Melican Joss. All light,” and he started for the door. He stopped, saddened, when he was told that this particular Joss was a god, and was visible only to the initiated. At intervals in the journey up the street he paused and fell to work with his little stick, jotting down some hasty sketch notes of people and things that caught his eye. He did this on the sly at first, but, as the realization of where he was at and the great task he was engaged in grew upon him, he [[missing text]

pitchers!” cried a gamin in Madison Square. en.wikipedia.org/wiki/Madison_Square “Uh! Chee! Luk at der guy!” In a minute ten or a dozen people were watching over his shoulder. Kai Kee stood it until his patience was worn out. Then he turned and delivered his passport thus: “Whalla mlatter? Sketchee for World plaper. All lightee! No?”  and with a scowl of ineffable boredness and disgust at their impoliteness, he stalked away and sought shelter in the Fifth Avenue Hotel.

When Kai heard that Presidents and Senators and some of the biggest—and littlest—men in the country came to the Fifth Avenue Hotel and talked and dickered, and drank, and ate, and slept, and were interviewed there, he pulled his drawing materials from under his blouse instanter and set to work.

His perspective—that generous, all-inclusive perspective, and to have secured which an American artist would have had to take a perch with Diana up on the tower of Madison Square Garden—Kai Kee evolved standing in the hotel doorway, and put on paper with a few strokes of his stick, which looks a good bit like a manicure’s instrument. Even the old loungers’ settees, which punctuate the wall spaces, he sketched in, but he omitted the rousts back in the far corners. He faked to put in a likeness of Dwight Lawrence and the congregation of newspaper men which [missing text].

crudities in his work he had one vast excuse. “No timee; allee same everybody in Melica, tloo much allee tlime hully up! hully up!” But whatever points in the hotel ensemble Kai overlooked, he took time, as will be seen, to put a few dabs of rangie-tangie, real old Chinese art in by way of decoration in the panels along the wall, and adorned the raiment of the swell visitor who is being welcomed in the foreground with a few calico print gayeties and a buttonhole bouquet which merits the notice of G. Francis Train.

“Tody” Hamilton, who was helping run the Barnum show at the Garden, was so dumbfounded when Kai Kee walked into his quarters and was introduced as a Chinese artist, all the way from Hong Kong, come to take Chiko’s picture, that he even forgot to ask Kai what he’d have to drink. But the reception that Chiko gave the man from China was literally a howling success.

He reared and tore about his narrow dwelling, and finally settled to the melodramatic pose in which Kai Kee has reproduced him. The Doyer street sketcher demonstrated in a very few minutes that he was an export on monkey business. He had Chiko, teeth and all, on paper in no time, and the gilded decorations of the wagon proved to be right in his line, too. But he couldn’t leave without paying a tribute to “Tody,” so put him in the foreground with an egregious hat.

Kai paused on the second day of his sketch making and stared at the great, grim portal of the Tombs. “Huh!” he said, shaking his head, “heap blig stlong place.” Then as he stood inside the court, where Justice Taintor was dealing out justice in chunks ranging from three to thirty days, he looked over the motley crowd and said deprecatingly, “Velly vlicked people.”

But the law had no terrors for him. He was there to make pictures. Nothing escaped him. Floor, ceiling, railings, policeman’s buttons—everything came within that wonderful range of his. And he caught the spirit of the scene, too, even the oleaginous Tammanyite who, out in front of the rail, sheds upon the spectators the luster of a self-satisfied smile and an awe-compelling diamond.

Over the Judge’s head Kai drew, with vast care and reverence, the big sword which is seen in the picture. Now, there may be a sword impending over Judge Taintor as did that over Damocles, but the Judge doesn’t know it. When it was suggested to Kai that he had dreamed [missing text].

ton and Amoy, great judges had the power to lop off the capitals of any or all of the drunkards and bummers and hoboes and thieves—and Monday morning perpetuals who were hauled before him.

And Kai doesn’t see why it is, either, that the big guns in America don’t have some sort of gold lace, or frills, or didos, or jigamaree work on their clothes. So, when he got down to the City Hall, and had made his way into the Mayor’s office, he decided to make a sketch of Gilroy as he should be made up. And here he is, with flowers on his coat and a mammoth boutonniere to match.

He caught the Mayor’s bald spot and the roller-top desk with amazing accuracy, and pictured this great man as a fat man. That was a subtle Chinese compliment, for beauty in the male is measured, in China, by the amount of adipose.

The artist was taken on another trip uptown. The reporter called a halt at Delmonico’s, but Kai declined to enter. He declared he could do ample justice to the job from an out-of-doors viewpoint; so he took out his paper and stick and went at it.

He holds his instrument, not as an American holds a pencil, but flat-wise and pointing directly from him, turning the paper as he works. His notion of the Delmonico interior is strangely suggestive of some restaurants in Mott street, chow chop sui, and kai-dong, and lop chong are served. The round tables in the centre of the room, and the square ones against the wall, all tell a tale of Mott street. It is only fair to say that the landlord in his shirtsleeves, entertaining his guest, is not meant for an accurate likeness of Charles Delmonico.

The dog—a strictly Chinese and hairless dog—is the property of the seriocomic female who seems to care less for food that for the sturdy and empty bottle of wine which appears to have set her on excellent terms of camaraderie with the devoted Johnnie whom she is chucking under the chin. Mr. Delmonico need not be offended if his furniture seems to be shaky or his viands scarce. Kai Kee would tell him that was all owing to “Melican hully up.”

But Kai’s crowning effort is his picture of Fifth avenue. He himself suggested that. He has outstripped the Puck and Judge and Life caricaturists in his depiction of the much-mooted Fifth-avenue-stage-horse. They have had him in all stages of emaciation and decrepitude, but it remained for Kai Kee to discover that the old beast had chronic blind-staggers, and picture him in the act of throwing a few fits of them. He still insists, in this picture, that the Oscar Wilde coats are the fit [missing text] great and the rich and [missing text] folk, and that, if a man [missing text].


(Wong Kai Kee has not been found in any United States Federal Census. Tomorrow: Where in The World Is Wong Kai Kee?)
Posted by Alex Jay at 8:00 AM