Arthur Henry “Al” Wheatley was a magician who used the Chinese-sounding names Ching Ling Fu, Tung Pin Soo (and sometimes as Tung Ping Soo) and Chop Chop. Billboard magazine identified Wheatley as an Irishman but he was born to an English father, Samuel Wheatley, and German mother, Johanna Wilms. According to Wheatley’s World War II draft card and the Social Security Death Index, he was born on March 26, 1901. A 1908 passenger list, at Ancestry.com, recorded his birthplace as Fremantle, Australia. The same birthplace was recorded on his mother’s 1936 and 1939 naturalization papers, which named her three children, however, Wheatley’s birth date was listed as March 25, 1900.
On April 30, 1908, Wheatley, his older brother, John, and mother were aboard the S.S. Friedrich Der Grosse when it departed Genoa, Italy. They arrived in the port of New York on May 14. They were bound for Westerley, Rhode Island.
The 1910 U.S. Federal Census recorded Wheatley, his parents, brother and sister in New Britain, Connecticut at 150 Cleveland Street. Wheatley’s father was a laborer.
According to the 1920 census, the Wheatley family lived in Salem, Connecticut, where Wheatley, his father and brother worked on their farm.
On January 8, 1926, Wheatley’s father passed away in Hartford, Connecticut. The 1926 Hartford, Connecticut city directory said Wheatley and his siblings boarded in Farmington.
The New York, New York, Marriage License Index, at Ancestry.com, said Wheatley and Isabelle L. Dubuque obtained a license in Manhattan on September 15, 1927. Their daughter, Loraine, was born in Cleveland, Ohio on October 22, 1928.
Wheatley has not yet been found in the 1930 census. His mother, brother and two sisters were in Hartford.
The Illustrated History of Magic (1996) said Wheatley “worked as Jean Hugard’s assistant, before he too became an expert ‘Chinese’ magician; first as Ching Ling Fu*, then as Tung Pin Soo, and eventually as Chop Chop.” Hugard was born John Gerard Rodney Boyce in Australia and performed a Chinese routine in his magic act.
Billboard, August 15, 1931, published the column Magic Notes by Bill Sachs who wrote

Bailey, magician and hypnotist, chirps from Hartford, Conn.; “Must say that Newton LuMar is right. Hart­ford had had about four visiting magi in the last year. Hartford audiences eat up magic, and it’s a shame some of the vaude magi don’t take advantage of this. ... In recent weeks three of the Hartford boys have given benefit shows at the local poor children’s camp. Those donating their services were Ching Ling Fu, E. K. Schleldge and myself. ...

Lots of magical activity around Hartford, Conn., these days, according to work received from Derby Hicks. Lon Yuen and Company recently played the Cameo Theater, that city and kept the local magi guessing with their clever exhibition. Bailey is corralling a lot of club dates within a 30-mlle radius of Hartford. Ching Ling Fu la repeating on a flock of his last year dates. ...

... Jack Lynch has taken a flying trip to the South in an endeavor to get some new talent for his already sparkling Continental Revue at the Cafe Marguery in the Adelphia. Bob Roltner, master of ceremonies, presents Bob du Pont, Tung Pin Soo, Ruth Laird and her Texas Rockets, Kay Kernan, lovely blues singer; Pritchard and Lord, ballroom dancers; John Tio in an unusual European novelty and Evan Burrows Fontaine, popular star of screen and stage. The orchestras of Eddie Bonnelly and Vincent Rizzo provide the music, with Agnes Tolle at the harp.

“The Casa Mana[na] Revue” is the stage attraction, with Sid Page and his Pages of Fun; Yeva in her “San Mariko Dance,” Happy Delano Dell, Tung Pin Soo and Company, Larimer and Hudson, Mary and Bob Miland, Hazel Kennedy. 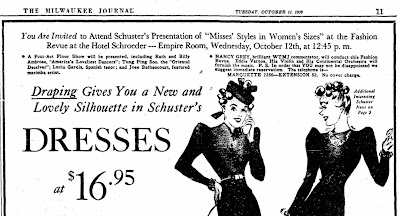 Times-Picayune (New Orleans, Louisiana)
November 10, 1938
Wheatley and his wife (a Hartford, Connecticut native) were aboard the S.S. Argentina when it departed Buenos Aires on February 17, 1939. They arrived in New York on March 6. The passenger list said Wheatley’s address was ”Colchester, Conn., R.F.D. #4”.
Wheatley’s mother’s Petition for Naturalization application, signed January 19, 1940, said Wheatley lived in Chicago, Illinois. He has not yet been found in the 1940 census. At some point Wheatley divorced Isabelle and married Charlene June Johnson who became part of the act as Lady Soo (below). 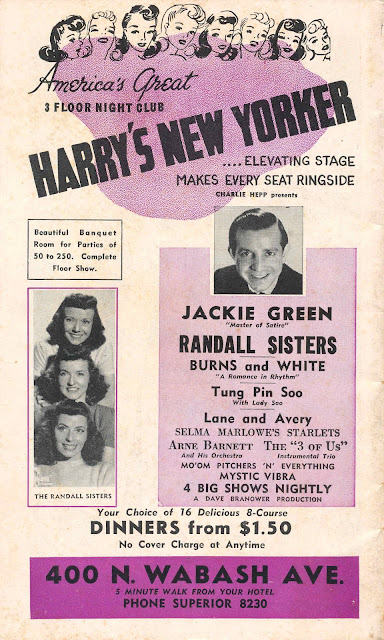 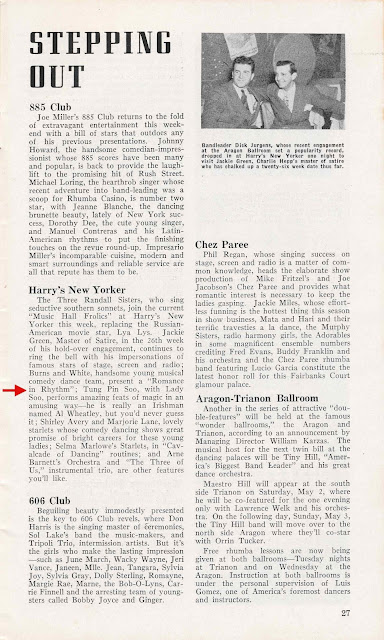 This Week in Chicago, April 25, 1942
On February 16, 1942, Wheatley signed his World War II draft card. His home address was that of his employer, the Music Corporation of America, 430 North Michigan Avenue in Chicago, Illinois. His description was seventy-one and a half inches, 150 pounds, with blue eyes and brown hair.
Billboard, March 20, 1943, reviewed Wheatley’s act and said

Tung Pin Soo, the Irishman who has developed an enjoyable Chinese character in make-up and mannerisms, holds attention with his versatile magic act. Works with cigarettes, cards, coins, among other objects, and binds all the tricks into a smoothly running act. His cute wife, also in a Chinese outfit, helps with the props. 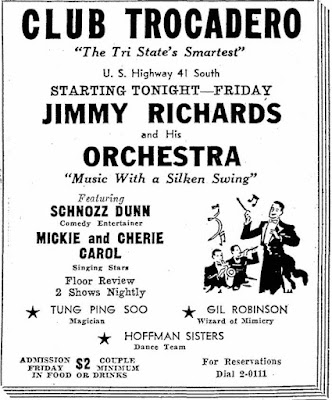 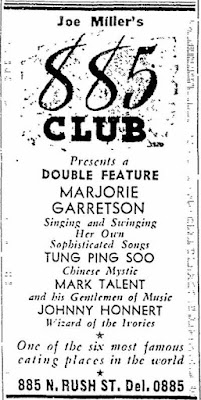 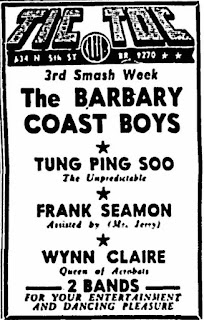 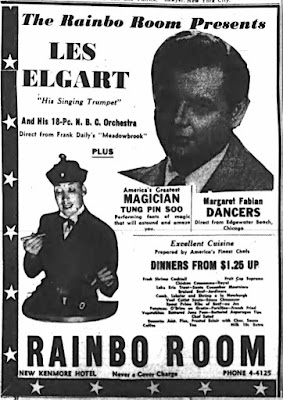 I was talking to a very clever “Chinese” magician, who bills himself as Tung Pin Soo, and asked him how he got his start in magic.
“By washing ducks for Long Tack Sam,” he replied.
This was far from the answer I expected, because, when you ask a magician how he got his start, he usually gives you some high-blown story, wrapped in the occult.
“The ducks,” he continued, “would get very grimy from disappearing and reappearing and it was my job to launder them. Sometimes they wouldn’t get clean, so I used to rub them with chalk and talcum.”
The mysterious Oriental, who, privately, is Mr. Al Wheatley, of Australia, had reason to wish one time he hadn’t adopted the Chinese character. The immigration officials in Brazil were expecting a Chinese and put him to hours of inquisition. Then the customs people grabbed him on suspicion of being a professional smuggler because they found secret compartments in his props.
Mr. Wheatley’s career as a magician in his own right came close to being terminated almost at the outset. He was given a small spot on a musical production featuring Sally Rand. One of his chickens got away and flopped onto the top of the piano in the orchestra pit.
The pianist tried to grab it but the hen kept inching out of reach.
Mr. Wheatley finished his act. The curtain then parted for the star’s big entrance.
Miss Rand, swinging her fans, advanced majestically down a great flight of stairs. Possibly the chicken mistook her for a giant relative, for it began to cackle like mad. Miss Rand exited from the stage in hysterics.
“You get that blankety-blank Chinaman and his poultry out of this show!” she screamed. “I won’t work in the same theatre with his blasted hens!”
Mr. Wheatley managed to stay on only by promising Miss Rand she would henceforth be the only one in the show with feathers.

Bearing out a statement made here last week Al Wheatley scribbles from Toronto that he will sail for England in April. Wheatley has dropped his Tung Pin Soo billing and is now working with his comely wife as Chop Chop and Charlene, still doing the Chinese routine. They open this week at the Shoreham Hotel, Washington. “Have had a long and successful tour,” Wheatley writes, including stops in Las Vegas, Reno, Lake Tahoe, Seattle, Portland, Spokane, Philadelphia, Montreal, Toronto and Buffalo, and have found business good in general.

Portions of an excellent movie “Trouble Along the Way”, starring John Wayne and Charles Coburn, will be shown on Ed Sullivan’s “Toast of the Town” tonight ... Elaine Dunn, dancer, Chop-Chop and Charlene are other attractions on the Sullivan show.

Chop Chop and Charlene were featured on the covers of Genii June 1955 (below) and September 1959.

On July 2, 1961, Chop Chop and Charlene appeared on the Ed Sullivan Show (below). 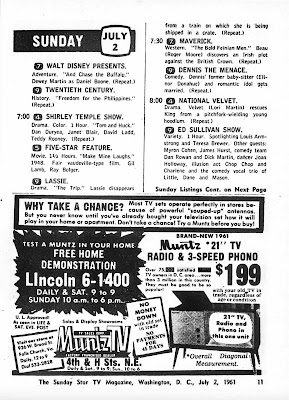 Wheatley passed away on November 12, 1964, according to a report filed at The Hague.

[Google Translation]
According to an extract from the daily register of the steamship “Statendam” of the limited liability company Dutch-American Steamship Company
“Holland-American Line” in Rotterdam passed away on November twelve, nineteen hundred and sixty-four, at fifteen hours, zero minutes, on board reported bottom, located in Suva, Fiji Islands: Wheatley, Arthur Henry, last domiciled in Hollywood, California in United States of North American, aged sixty-three, married to: Johnson, Charlene June, son of: Wheatley, Samuel and: Johanna, both deceased. Of which deed, on the twenty-first day of December, nineteen hundred and sixty-four. The civil registrar of The Hague.

Arthur Wheatley Dies, Former City Magician
Arthur H. Wheatley, 63, Hollywood, Calif., formerly of Hartford, a magician and night club entertainer, died Friday aboard the SS Stratendam [sic]. A native of Hartford, he moved to Hollywood several years ago and has since appeared in several night clubs. He has appeared on the Ed Sullivan show and in many local magic shows during his career as an entertainer. He leaves his wife, Mrs. Charlene Wheatley; a daughter, Mrs. Joseph Sasso of Chicago, Ill.; a sister, Miss Gladys M. Wheatley of Hartford, and five grandchildren.

* Ching Ling Fu was a variation on the name of Chinese magician, Ching Ling Foo, who was impersonated by Sigmund Neuberger. Another similar name was Chung Ling Soo who was William E. Robinson.
Further Reading and Viewing
Photographs here and here
Magic Tricks, Science Facts (1990), pages 67–71: Chop Chop’s Cup
Magicpedia, The Chop Cup
(Next post on Friday: Ching-chih Yee, Artist and Teacher)
Posted by Alex Jay at 8:00 AM