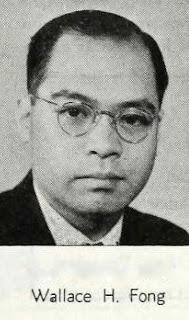 Wallace H. Fong was born Yim Hing Fong on July 6, 1905, in Dutch Flat, California, which was once known for gold mining and the transcontinental railroad. Fong’s Christian full name and birth information were found on his World War II draft card at Ancestry.com. His Chinese name was recorded on a handful of passenger lists also at Ancestry.com.
In 1911 Fong’s family traveled from Dutch Flat to China. They returned about two years later. Below are images of the 1913 passenger list with Fong, his older brother, Sing Wy, and mother, Ah Toy Hung, a widow, on lines twelve through fourteen. 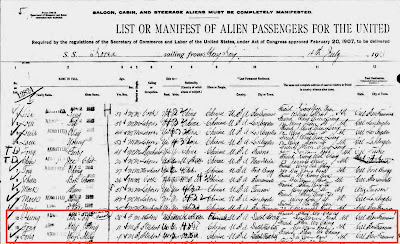 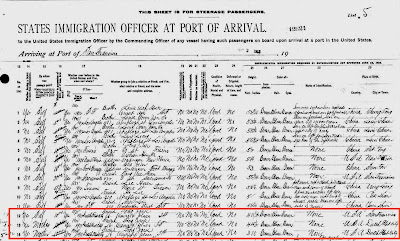 They departed Hong Kong on July 14 and arrived in San Francisco on August 2. Upon arrival each of them was assigned a Chinese Exclusion Act case file number which were recorded in a log for Chinese passengers. Fong’s number was 12824/5-14; his brother’s was 12824/5-13; and his mother’s was 12824/5-12. The files would have photographs of them; information on where they lived in China and the status of Fong’s father. In column seventeen it said the trio were in Dutch Flat until 1911. Column eighteen had the name of their friend, Fong Jock of 16 Waverly Place in San Francisco.
Fong and his family have not yet been found in the 1920 U.S. Federal Census. Information about his education is not known.
According to the 1930 census, Wallace Fong, a photographer, lived in San Francisco. His wife was Pearl (Wong) whom he married around 1925. They had a four-year-old son, Wallace Jr. Their address was 115 Wetmore Street. The same address and profession were recorded in the California Voter Registration database at Ancestry.com. Fong was a Republican. The 1936 registration said his address was 1023 Washington Street. Fong’s address was 1116 Powell Street in the 1938 and 1940 registrations.
Fong was politically active. The San Francisco Chronicle, August 14, 1938, said “Ken B. Dawson, candidate for Congress, Fourth District, has been notified of the formation of a Chinese committee to work among the Chinese voters of the district for his election. Lim P. Lee heads the committee, which includes C.W. Lee, William Hoy, Him P. Lee, Wallace Fong, Dr. Margaret Chung, John Chinn and George Chow. ...”
In the mid-1930s Fong was a photographer for the Chinese Digest. The first issue was dated November 15, 1935. Many of the photographs had the credit line, Chinese Digest Photo. The first time Fong was mentioned was in Bob Poon’s column in the July 3, 1936 issue.

Met our stout photographer Monday. Is it possible ye editor has put him on a reducing diet? Anyway, we hear tell that the nice photo of the Y.M.C.A. board of directors on page 8 was the result of the latest “reducing exercise.”
Imagine chasing after 16 of the busiest business and professional people and getting them to take time out of their heavy routine for the day in different parts of the city to pose for you! Wally Fong (he prefers to be called Mr. Wallace H. Fong) ought to be hung with a medal for it. Anyway, the Digest staff was ever a “get your man” bunch, so look out for our steam, and keep the keyhole covered!

The Chinese Digest, August 21, 1936, had photographs of the staff which included Fong. His name also appeared in the staff box. 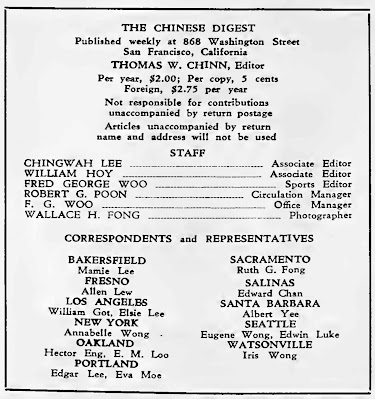 Fong was mentioned on page seventeen in the November 13, 1936 issue,  “Mr. Wallace H. Fong, staff photographer, is a veteran in the shooting business and presents the pictorial side of the Chinese Digest to you.” Fong was credited, in the index, for all of the 1937 Chinese Digest covers. However, I believe the Good Earth cover was by Frank Tanner. 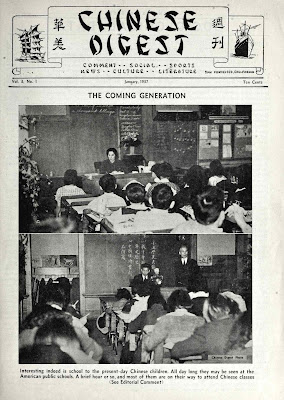 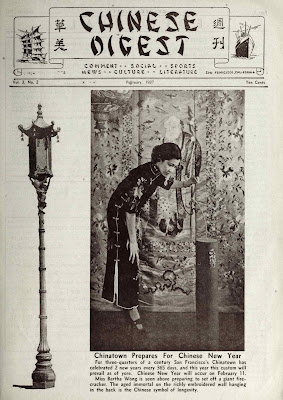 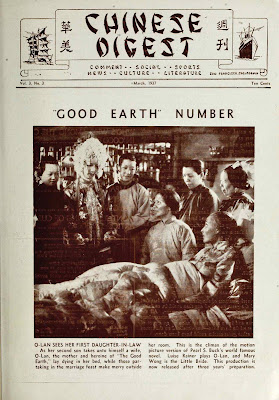 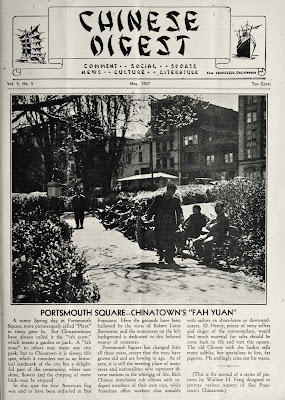 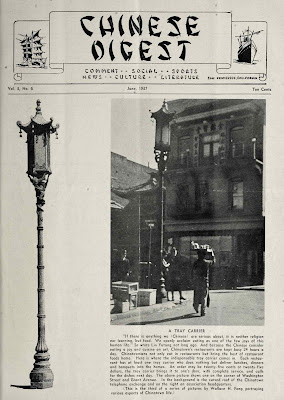 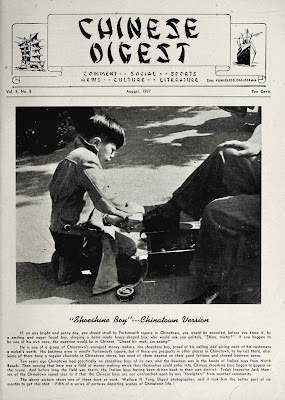 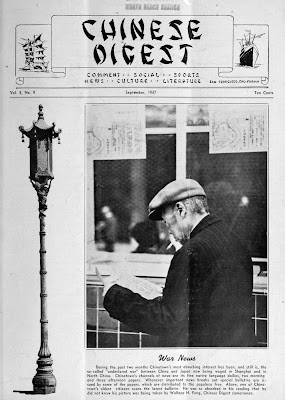 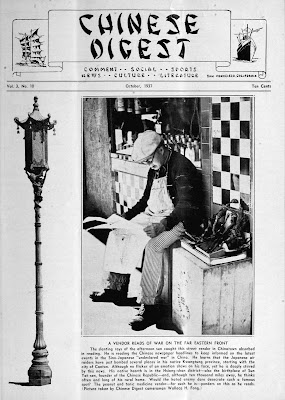 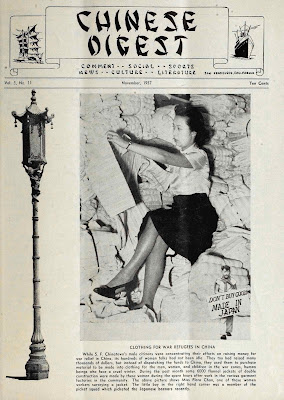 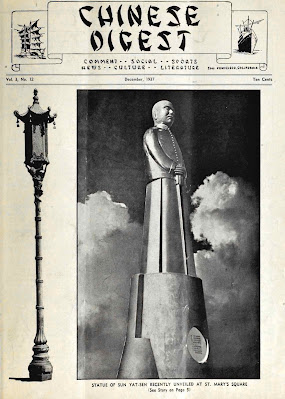 In Chinese Digest, August 1938, the “Roaming ’Round” column said “An amateur photography contest, the first among us Chinese, will bring a multitude of camera fans out to shoot for the many valuable prizes. Official judges of this contest are Wallace Fong, the ‘Chinese Digest’s’ lensman, Yee Wong, well-known portrait artist, and Ton Wong Lee, ace cameraman.” Fong was credited in several Chinese Digest issues of 1938 and 1939. 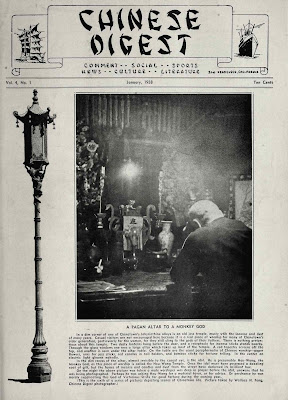 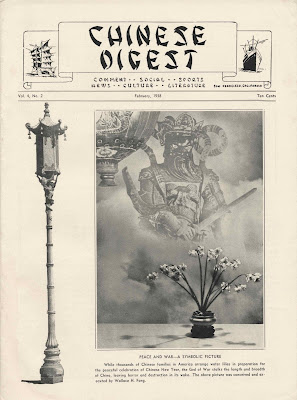 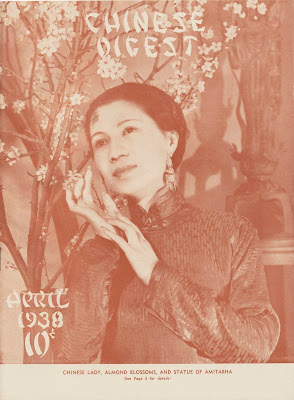 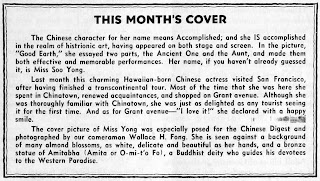 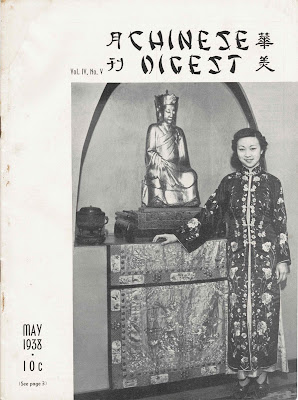 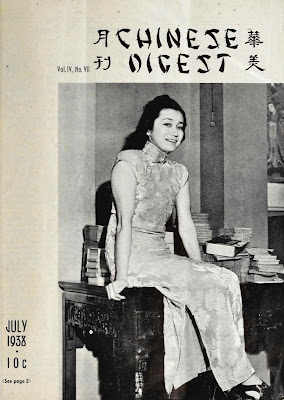 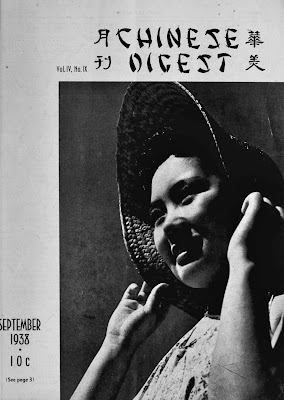 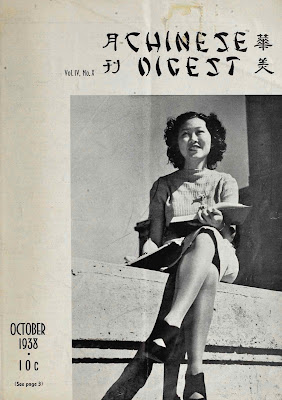 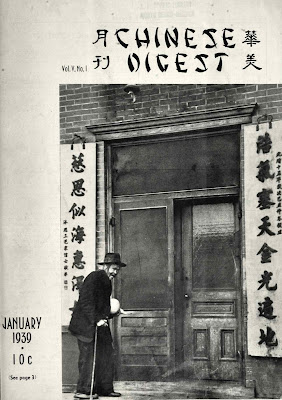 Chinese Digest ceased publication with its April–June/July–September 1940 issue. (Three of Fong’s Chinese Digest photographs were printed, on pages 145 and 146, in the 1989 Chinese Historical Society of America book, Bridging the Pacific: San Francisco Chinatown and Its People.)
The Chronicle, July 14, 1940, said “Wallace Fong, ace photographer for the Chinese News and the California Chinese Pioneer Historical Society, has equipment valued at more than $5000.”
On October 16, 1940, Fong signed his World War II draft card. His address was 1116 Powell Street in San Francisco. He was self-employed and worked at 615 Jackson Street. Asian American Art: A History, 1850–1970 (2008) said “... Fong was not the proprietor of his own photography studio; most likely he was employed at a local studio, such as May’s Photo Studio, before and possibly during his time at the Chinese Digest.” 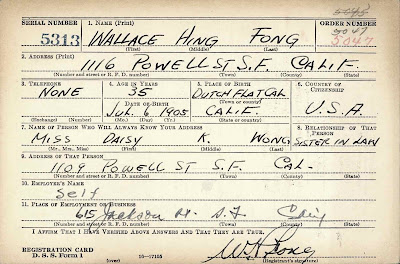 The Chronicle, November 14, 1940, reported the upcoming debut (November 22) of the California Chinese Press newspaper. The staff members were Bill Hoy and Charles Leong, both editors and publishers; Lim P. Lee, associate editor; Dong Kingman, art director; “And Wallace H. Fong—who can be called without qualification ‘the No. 1 photographer of Chinatown scenes today’—is photographer.”
The Madera Daily Tribune (California), January 4, 1941, published, on page four, Fong’s United Press photograph of Buckeye Sam. Fong may have freelanced for other news organizations and newspapers.
Fong’s brother, Sing, signed his draft card on February 14, 1942. He was born on July 2, 1902 and was living with Fong at 1116 Powell Street. The card said Sing worked for Hop Lee in Sonoma and Fong was his next of kin. Sing may be the same person, listed at 730 Washington Street, in the San Francisco Chinese Directory 1949. What became of Sing is not known.
Editor & Publisher, February 13, 1943, said “Other new additions to the AP [Associated Press] staff in that city [San Francisco] include ... Wallace Fong, Jr., a Chinese who is telemat mailer.” Fong’s son signed his draft card on July 7, 1943. He lived with his parents at 1116 Powell Street. Popular Photography, November 1943, explained how junior got his job.

On the recommendation of a Chinese newspaperman, the Associated Press in San Francisco recently hired 17-year-old Wallace Fong, Jr., to work in the darkroom of its news photo department. Subsequently, another vacancy in the darkroom staff developed, and Wallace’s work had been so satisfactory, the Chinese newspaperman was approached for another recommendation. “I will not only recommend another man,” he replied, “but I’ll send you the man who taught Wallace all he knows about photography. I’ll send you his father.” So now working side by side in the AP darkroom are Wallace, Sr., a Chinatown photographer for 14 years and Wallace, Jr.

The Oregon Journal, September 3, 1945, reported the formal ceremony of Japan’s surrender on the U.S.S. Missouri. Associated Press photographer Frank Filan documented the event. His undeveloped negatives were flown from an airfield near Tokyo to Seattle, Washington in 22 hours. The Journal said “Associated Press Newsphoto Editor N.R. Wilson of San Francisco and Wallace Fong Sr. of the Associated Press San Francisco darkroom staff flew to Seattle to handle fast processing and editing of Filan’s negatives.”
The 1944 and 1945 San Francisco city directories listed Fong and his son at 859 Broadway. Fong was listed at 1314 Leavenworth in the San Francisco Chinese Directory 1949. The same address was on a manifest documenting Fong’s July 6, 1952 crossing from Canada to Blaine, Washington. The card (below) had both Chinese and Christian names. 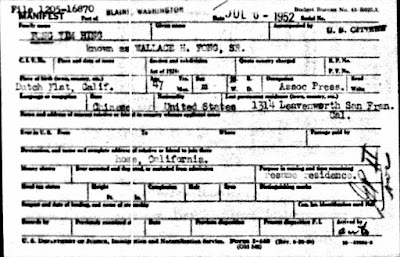 San Mateo directories for 1953 through 1964 listed Fong and his son at 1117 Tilton Avenue and they continued to be employed at the Associated Press.
In the late-1960s the Fongs moved to Los Angeles.
Fong’s wife passed away on July 21, 1969. Her obituary was published in the San Francisco Examiner, July 24.

Wallace Fong Jr. Retired Photographer
Associated Press, Rancho Palos Verdes—Wallace H. (Wally) Fong Jr., a retired Associated Press photographer, has died following a heart attack. He was 66. The veteran lensman died at his home Tuesday. Fong joined the AP in San Francisco in 1943 as a photo messenger. He became a photo printer in 1944 and made many of the historic photographic prints from major battles in World War II and the Korean War. Fong worked at most of the national political conventions and presidential inaugurations during his career. He also assisted in coverage of many Super Bowls and World Series games. He became a staff photographer in 1967 and transferred to Los Angeles, where he retired in 1990. He is survived by his wife, Bella, and two children. Funeral arrangements were incomplete.

His photograph of Wilt Chamberlain is here (scroll down to image 50/76).
This post is dedicated to the late Corky Lee.
(Next post on Friday: Yun Gee at Robert Schoelkopf Gallery, May 1968)
Posted by Alex Jay at 8:00 AM