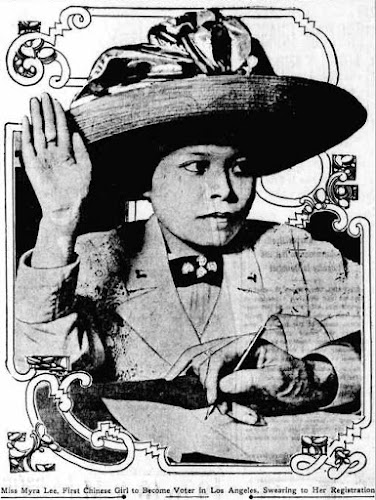 Miss Myra Lee, as pretty a Chinese girl as ever wore the graceful flowing raiment of her people, is the first Oriental woman to register in Los Angeles as a voter.

Moreover, Miss Lee is a suffragette. She believes in the thorough emancipation of woman. She is going to teach it to other people’s children—here and in China.

Miss Lee, besides being Chinese, is accomplished. She graduated with honors from the grammar schools of this city and later took a four year course in the Polytechnic high school, specializing in higher literature.

Miss Lee is 22, diminutive, round-faced, rosy and the picture of health. She speaks English with a sweetness of expression and a grammatical thoroughness that are most winsome. And she is entirely up-to-date on the topics of the day in the worlds of music, art, literature and general education.

A firm believer in the principles of woman suffrage, Miss Lee is going to China soon to teach it, along with English and literature, to the children of the Chinese in a government school, probably in Canton, the birthplace of her father, Lee Kwai Sing. Her father, by the way, is a very prominent member of Chinese society in Los Angeles and possesses many wealthy and influential friends in the new republican government in China. His daughter, as the result of this prestige, is to have a school there. In preparation for this life she has been for years teaching English to Chinese students in this city. She lives with her parents at 1322 South Hill street. 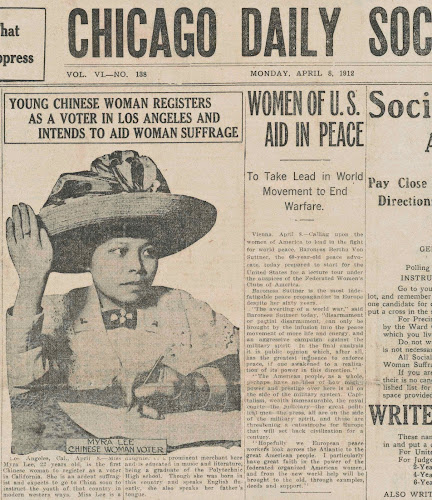 Los Angeles, Cal., April 8.—Miss Myra Lee, 22 years old, is the first Chinese woman to register as a voter in California. She is an ardent suffragist and expects to go to China soon to instruct the youth of that country in modern western ways. Miss Lee is a daughter of a prominent merchant here and is educated in music and literature, being a graduate of the Polytechnic High school. Though she was born in this country and speaks English fluently, she also speaks her father’s tongue.