Ethel Chun was born Wai Eng Chun on September 1, 1914, in Honolulu, Hawaii. Her Chinese name was found in a family tree published in the 1977 Hawaii Chinese History Center publication, The Bamboo Path: Life and Writings of a Chinese in Hawaii; the 1920 U.S. Federal Census; and a passenger list. Chun’s birth date is from the Social Security Death Index and birthplace from the census and newspaper articles.

A family history was written by Chun’s brother-in-law, Tin-Yuke Char, who was married to Wai Jane, the third of five sisters. Here are two excerpts from Char’s story.


… Wai Jane’s father was Chun Kam-chow, proprietor of the C. K. Chow Dry Goods Store on King and River Streets. Her mother belonged to the Mark family. Both families came from Shekki in Chungshan district. Both grandfather Chun and grandfather Mark had lived in San Francisco and Honolulu as merchants until they returned to the home village in Shekki and arranged for the engagement of their son and daughter. Chun Kam-chow had been born in 1875. …

The address was the same in the 1930 census. The Honolulu Advertiser, March 3, 1997, said Chun attended the Punahou school. The school’s 1930 yearbook, The Oahuan, published a photograph of the sophomore class that included Chun. 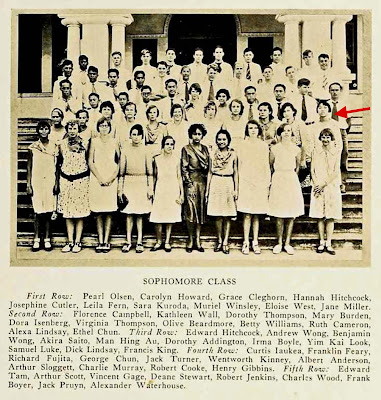 Chun continued her education at the University of Hawaii. She had a listing in The Handbook of Chinese Students in U.S.A., 1933: “Chun, Ehtel Wai Eng, Home Econ., Univ. of Hawaii, 1050 Beretania St., Hawaii.” In the 1934 University of Hawaii yearbook, Ka Palapala, she was in the Home Economics Club and Yang Chung Hui, a Chinese sorority. 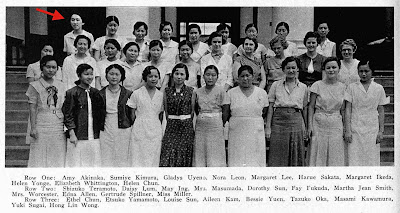 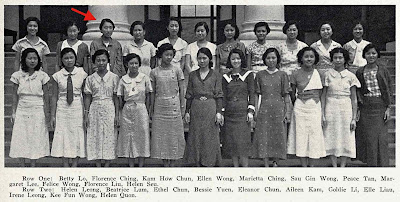 Chun was in the class of 1936. She was a member of both groups in the 1936 yearbook but did not have a senior photograph. The Honolulu Advertiser said Chun “graduated from the University of Hawaii at Manoa in 1936, with a degree in home economics. … Encouraged by California artist Millard Sheets, Lum [her married name] won a scholarship to the Chouinard School of Art in California for two years.”

A passenger list, at Ancestry.com, listed Chun aboard the steamship Malolo which departed Honolulu on August 2, 1936. She arrived in Los Angeles on September 3. A hand-written note by Chun’s Christian name added her Chinese name, Wai Eng, and Certificate of Identity number 18962.


Miss Ethel Chun, recent arrival from Honolulu, is now a student at the Chouinard Art institute, leading art school on the Pacific Coast. Miss Chun is from the University of Hawaii, and was a major in home economics. She is the first Oriental girl to become a member of the exclusive Four Arts Club.

Eight weeks later the Chinese Digest, November 27, 1936, said “Ethel Chun is a scholarship student from the U. of Hawaii. She is studying at the Chouinard Art Institute in L. A. Some of Miss Chun’s work from the Island is on exhibit at the school.”


Chun’s second trip to Los Angeles began in Honolulu on June 11, 1937. The steamship Lurline arrived in Los Angeles on September 18. The passenger list had the same Certificate of Identity number plus Chun’s Chinese Exclusion Act case file number 4500/3052 in Honolulu.

After Chouinard Chun spent several months on the Mainland. The March-April 1939 issue of Chinese Digest published the following article.

Measuring 17 by 22 inches and lithographed in five bright colors, this is the first picture map every [sic] published here. It contains more than fifty illustrated figures, each showing a distinct phase of Chinatown life or an interesting locale.

Interestingly enough, the drawing of the map was executed by an Honolulu Chinese artist, Ethel Chun. A graduate in liberal arts from the University of Hawaii, Miss Chun studied art for two years on a scholarship at the Charnard [sic] Art School in Los Angeles until about a year ago. Then, while on a visit to San Francisco she was asked by the California Chinese Pioneer Historical Society to draw a colored cartograph of Chinatown, giving not only its geography and interesting spots but also injecting into it human interest and humorous touches. The finished product showed artistry, imagination, and humor.

Miss Chun has since returned home and is now teaching art in a high school on the island of Maui. On the back of the map is a 2,000 word guide to Chinatown, plus a check list of its most interesting places. It is thus a useful guide for Chinatown visitors and a good reference map for Chinatownians as well.

The California Chinese Pioneer Historical Society, publisher of this cartograph, is an organization devoted to the preservation, collection, and publication of data and history on the Chinese in this state. Its headquarters is located at 24 Old Chinatown. Its members are now preparing an exhibition of interesting California Chinese relics to be shown to the public soon.

Chun’s map was included in Picturing America: The Golden Age of Pictorial Maps (2017) with this description:

The Honolulu Academy of Arts News Bulletin and Calendar announced, in a 1939 issue, “The Jon and Eleanor Freitas prize for the best painting by an Island-Born artist exhibiting for the first time was given to Ethel Chun’s watercolor “The Fisherman.”

Chun was counted twice in the 1940 census. She was counted in her parents’ household whose Honolulu address was 1311 Victoria Street. Chun was a teacher at the Lahainaluna School in Lahaina, Maui. She was a lodger in the household of Milton and Hattie Foster, both teachers. Also teaching at the school was Alfred Lum Lung, Chun’s future husband.

Chun was featured in the Honolulu Advertiser, February 17, 1941.


Ethel Chun, one of Honolulu’s promising native born artists, works in water color but sometimes paints in oil and tempera. Miss Chun finished her training at the University of Hawaii and later continued at Chouinard’s School of Design, Los Angeles, studying with Millard Sheets. She works as a textile designer and her patterns are printed on the Mainland and then made up into attractive sport and beach models. Miss Chun has swift, sure strokes that are strong. Her pictures are well composed, rich in tonal values and her colors are brilliant and transparent. Her favorite compositions are marines that teem with action and color and she is interested in flying spray that is released against contrasting dark volcanic shore line.

The marriages of Chun and sister Wai Chee were published in the Honolulu Advertiser, January 25, 1942.

Ethel was married to Mr. Lum in Lahaina on New Year’s Day. Mr. and Mrs. H.C. Du[?] were attendants. The bride graduated from Punahou school and the University of Hawaii and Chouinard Art institute in Los Angeles. She is a member of the Honolulu Art society and Association of Honolulu Artists and was formerly a member of Lahainaluna high school staff. Mr. Lum is an instructor at Lahianaluna [sic]. The couple are making their home at the school. …

Lum signed his world War II draft card on February 14, 1942. His full name was Alfred Kuulei Lum Lung. Almost a month later Lum Lung was crossed out on the card and replaced with Lum, and, at the top of the card, was written “Name Changed by Decree—3-12-42”.

Chun’s address was 2311 Bingham Street according to Honolulu city directories (in various years at Ancestry.com) from 1947 to 1981. Her husband was a clerk at King-Smith Sportswear into the mid-1960s.

Chun’s father passed away June 30, 1960. His obituary appeared the next day in the Honolulu Advertiser.

In 1974 the U.S. Consumer Product Safety Commission considered banning firecrackers but decided against it. The Associated Press report quoted from a letter by Chun to the commission.


“There are religious, cultural and ceremonial rites for the kitchen gods” at 5 a.m., New Year’s from 1 p.m. to 2 a.m., celebrations for birthdays, weddings, deaths, anniversaries, memorial days, house warnings, openings of businesses, completions of new homes and buildings, special holy days foe the numerous Taoist gods and Buddha, and many, many other religious rites.”

“The bombardments of firecrackers for these rites come any time during the day or night without warning to neighbors,” she wrote. “So, please be firm with the ban.”

Chun’s mother passed away on December 29, 1976. Her obituary appeared in the Vancouver Chinatown News, February 3, 1977, and was reprinted in The Bamboo Path. Here is an excerpt:

Mrs. Chun immigrated to Hawaii immediately after her marriage in China in 1903 to Mr. Chun from Honolulu, who had established and operated the C.K. Chow Dry Goods Store at King and River St. The store, the sign of which is still visible on its western facade, was a popular shop at one time for paniolas from outer islands and plantation workers just off the Oahu trains looking for palaka and sweat shirts, blue denim, felt hats, Panamas and Stetsons, and holiday wear kerchiefs of China silk. Mrs. Chun worked as a finisher of these work clothes on her manually operated sewing machine. While raising her family, Mrs. Chun observed with interest the steady growth of Honolulu for 75 years. She started out using kerosene lamps, gas lanterns, horse carriages and progressed to sound and color TV in her home. She watched the bygone era streetcars clanging along city streets to be replaced eventually by the silver buses to the still later colorful mass passenger transport of today which she enjoyed observing from the lanai of her Beretania St. home near the Honolulu Art Academy. The Chun family had lived there for more than half a century. Mrs. Chun had seen a World War I Gold Star at her neighbor’s window. During World War II she cared for some of her own little grandchildren who had become refugees from the Far Eastern front. The Vietnam and Korean conflicts provoked much anguish in her heart and she was constantly querying: “Has the war ended yet?”

This gentle mother was a firm believer in the value of education. When a family member graduated, she would regard it as a major event and would put on her best finery of a Chinese satin jacket over velvet-chiffon cheongsam for the occasion. On her “lily” feet she would make her way into Punahou’s Dillingham Hall or University’s Andrew Amphitheatre. She was always there at the pier or airport to see a family member departing for institutions of higher learning across the seas. Her legacy was a family in outstanding professions—teacher, librarian, astrophysicist, doctor, lawyer, pharmacist; also government and corporation officers.

In her golden years, she was still active in Gum Larn Hui (Golden Orchid Society), a group of senior Chinese women who met at monthly luncheon meetings. Private services were held Jan 4, by Rev. Harold Jow of the United Church of Christ. Interment took place at Nuuanu Memorial Park.

Chun and her brother Ellery were profiled and pictured in the Honolulu Advertiser, October 6, 1987.

Chun passed away on February 22, 1997, at her home in Honolulu. An obituary was published in the Honolulu Advertiser, March 3, 1997, and explained Chun’s role in her father and brother’s businesses and the development of the aloha shirt.

Ellery passed away May 16, 2000. Obituaries appeared in the Star-Bulletin, Los Angeles Times and Washington Post.