May 1938
The lower photo has Mrs. C.C. Huang, wife of the Consul General in San Francisco, and Jack Chen, artist, looking at one of the latter’s own works which was shown with 160 other examples of contemporary Chinese art here on April 5–6 and which were brought here by Jack Chen himself. This exhibition, which included woodcuts, cartoons, drawings, and sketches, had been shown in Moscow, in England, and in various cities in the U.S. It was shown in San Francisco under the auspices of the local branch of the American Friends of the Chinese People. 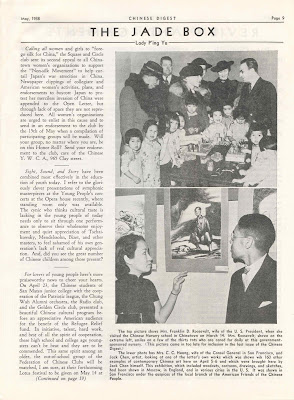 (Next post on Friday: Dong Kingman in Chinese Digest)
Posted by Alex Jay at 8:00 AM