Filmmaker Marion Evelyn Wong (1895–1964) directed, wrote and starred in the 1916 silent film, The Curse of the Quon Gwon: When the Far East Mingles with West, which was produced by her Mandarin Film Company. Although the film was not released, Wong received attention for her work. It’s not clear which news service syndicated the following news item which spelled her first name “Marian”.

Miss Marian Wong, a native of Oakland, Cal., who had won the distinction of being the first Chinese girl to write and stage a movie.

The entire cast composed of Chinese actors, was chosen by Miss Wong for her Oriental drama, a pretty romance displaying real Chinese customs and dress. There are 30 Chinese men and women in the production.

Miss Wong is 22 years old, a graduate of the Oakland high school and until recently a student at the University of California.

The newspaper item was followed by the magazine profile, “Marion E. Wong, Chinese Film Producer”, in Moving Picture World, July 7, 1917. The same issue had a synopsis and production notes about the film, “The Curse of Quon Qwon [sic]”.


The Mandarin Film Company, located in Oakland, Cal., is composed entirely of Chinese—all the officers of the company as well as the actors and actresses. Miss Marion E. Wong is president of the concern, which has recently completed its first production, entitled “The Curse of Quon Qwon [sic].”

Miss Wong is now in New York City in the interests of her company and its first production. The principal female parts are played by Miss Wong and her sister, who are American born and are well known in Oakland and vicinity. They have also lived in Canton City, China, for a time, and all the latter part of their first picture was made in China.

The Mandarin Film Company expects to continue the production of films dealing with Chinese subjects, and, needless to say, all the details and settings in its films will be correct from the Chinese view-point. The company has its own studio in Oakland, constructed and designed entirely acording [sic] to Chinese ideas and equipped with a large stock of Chinese costumes and properties. It is the only Chinese producing concern in this country. 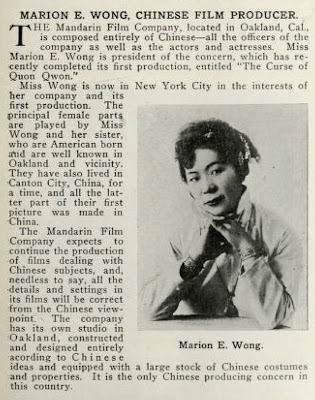 This is a multiple reel and the first production of the Mandarin Film Company, the only Chinese film manufacturing company in this country. It deals with the curse of a Chinese god that follows his people because of the influence of western civilization. The first part is taken in California, showing the intrigues of the Chinese who are in this country in behalf of the Chinese monarchical government, and those who are working for the revolutionists in favor of a Chinese republic.

A love story begins here and is carried through the rest of the production. The last part of the film is made in China and carefully portrays actual Chinese customs, habits, etc. The scenery and settings, especially in the latter half, are particularly interesting and show some wonderful Chinese scenery as well as strong dramatic sets, all combined with excellent photograhy [sic]. All the parts are played by Chinese artists. 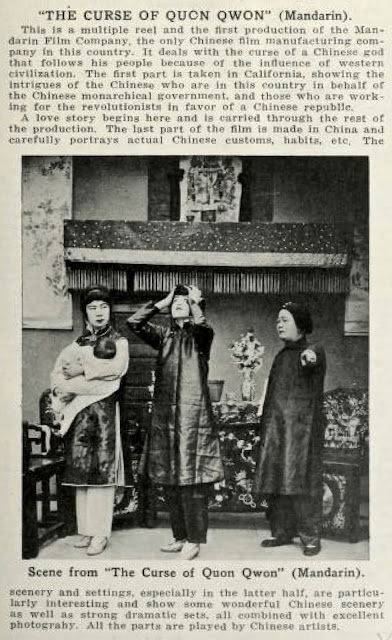 Wong is profiled here. On pages six through twelve of Chinese in Hollywood (2013) are stills from the film and text about Wong. Wong appears in Arthur Dong’s documentary, Hollywood Chinese.

(Next post on Friday: Anna May Wong by Armando Drechsler)
Posted by Alex Jay at 8:00 AM